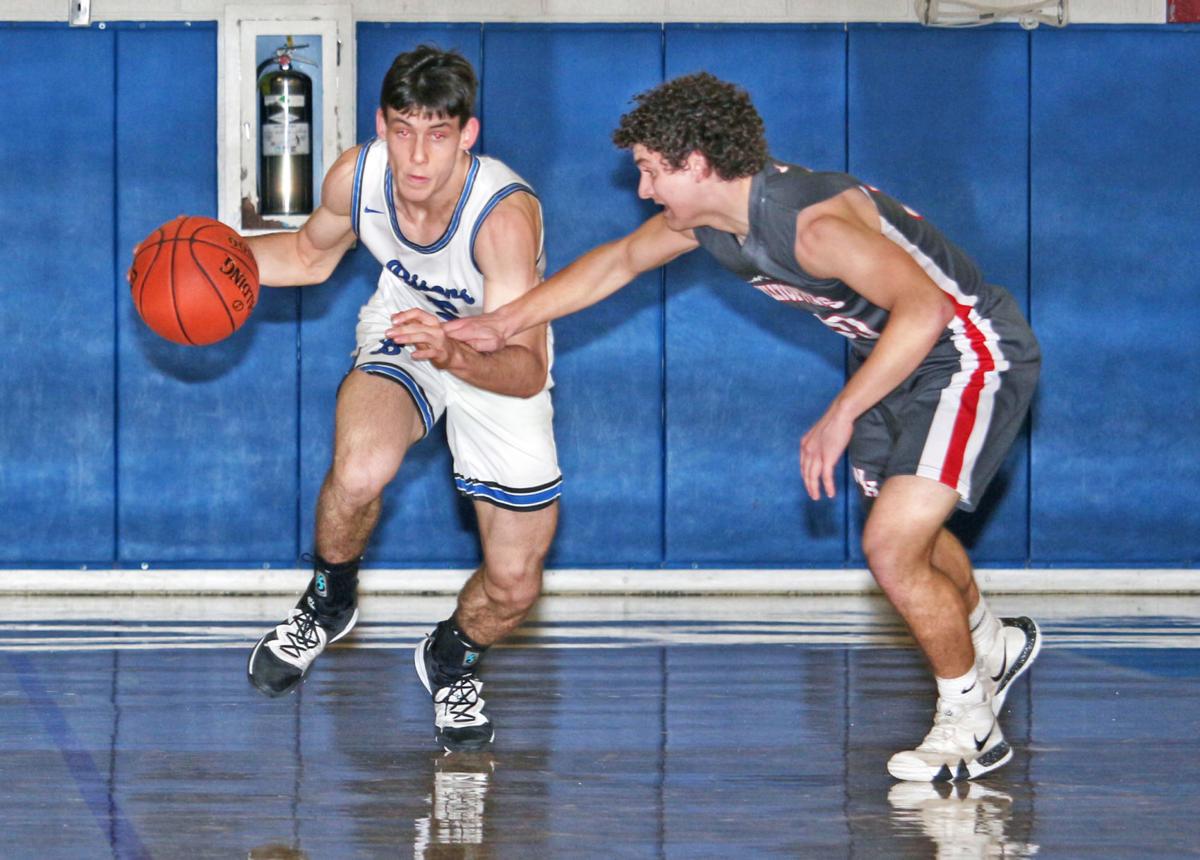 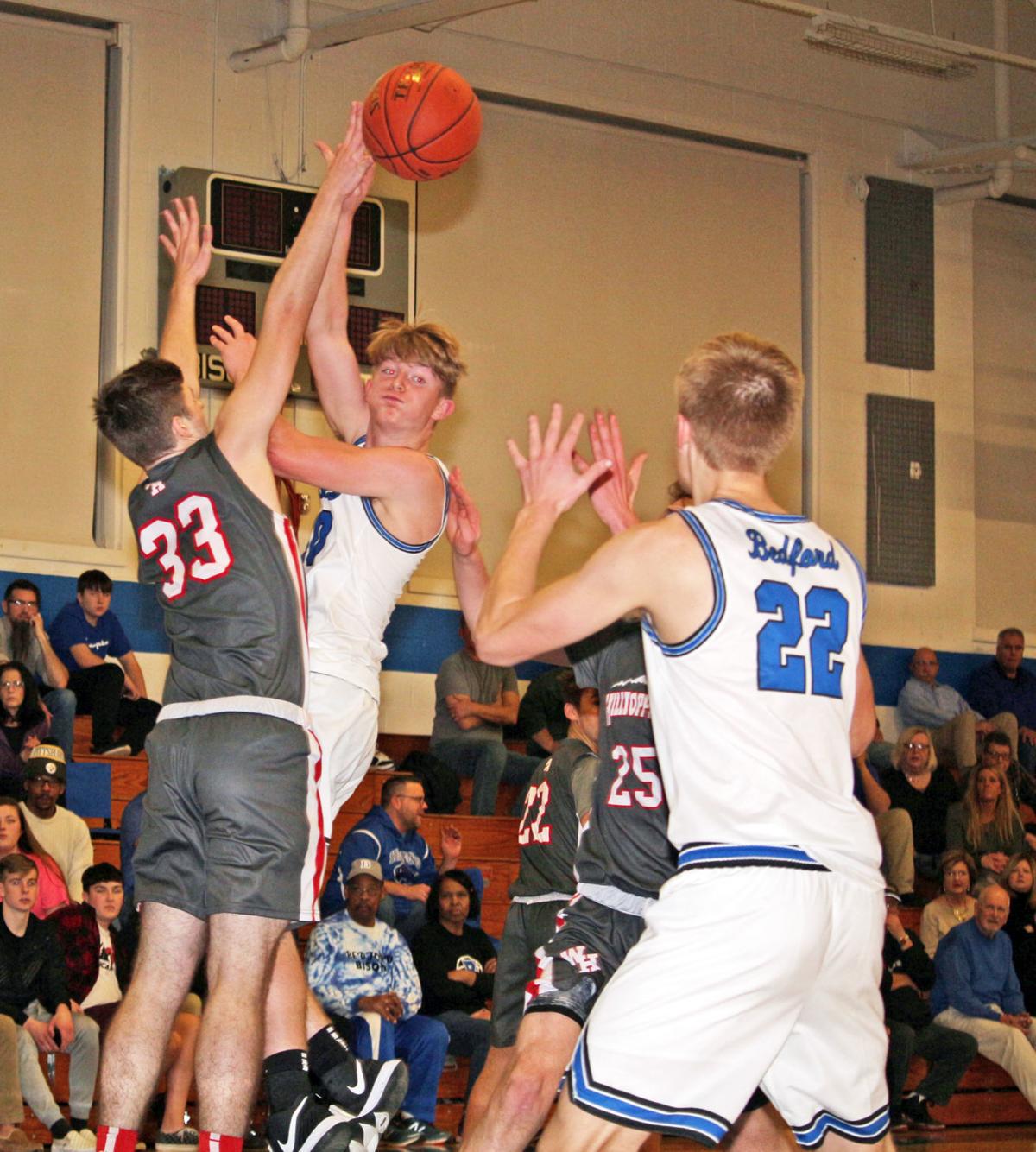 Bedford’s Spencer Ebersole, left, pitches a pass out to Joey Koontz, 22, during the second half against Westmont Hilltop, Wednesday. 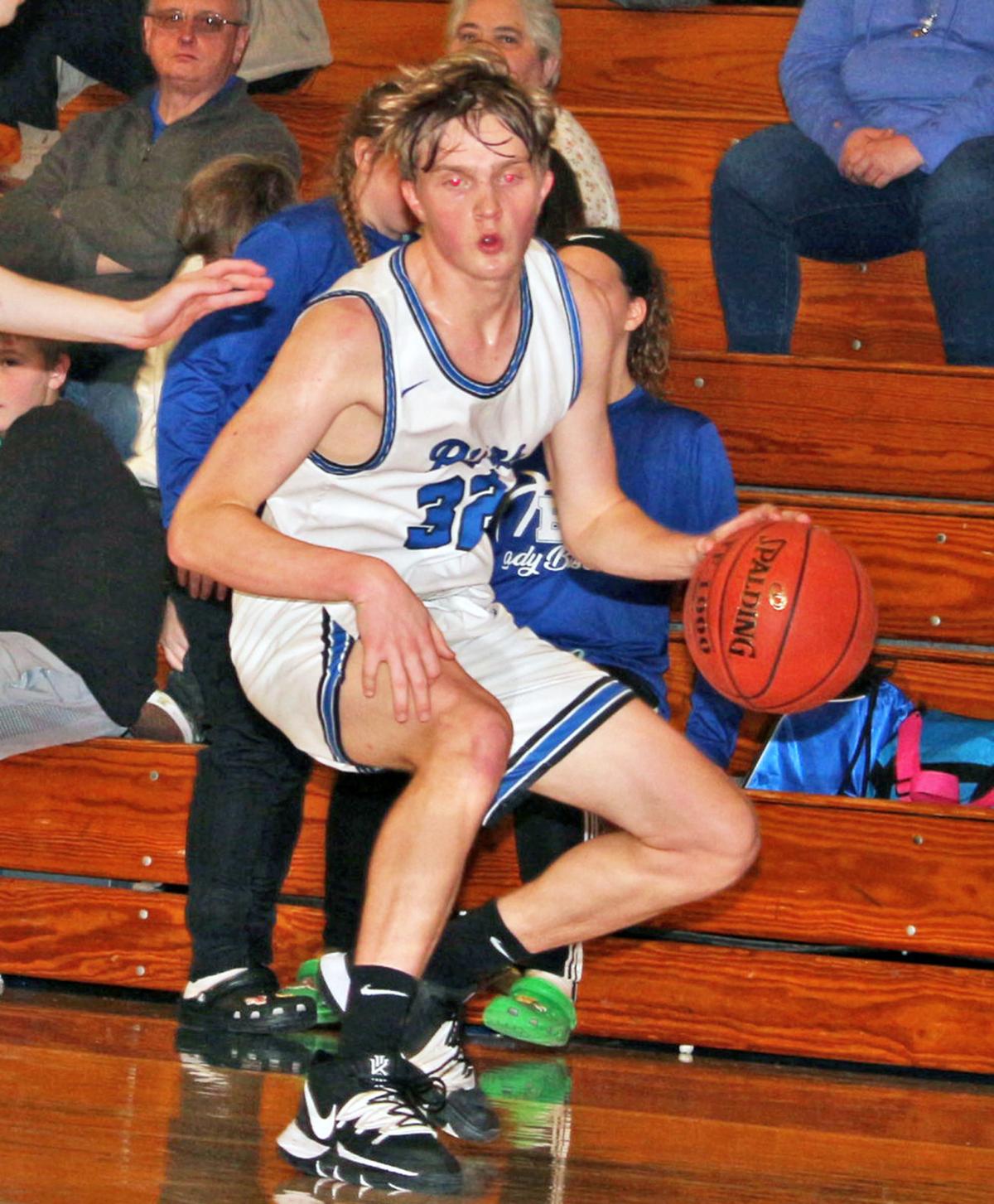 Bedford’s Drew Hall dribbles the ball into the key during the first quarter against Westmont Hilltop, Wednesday. 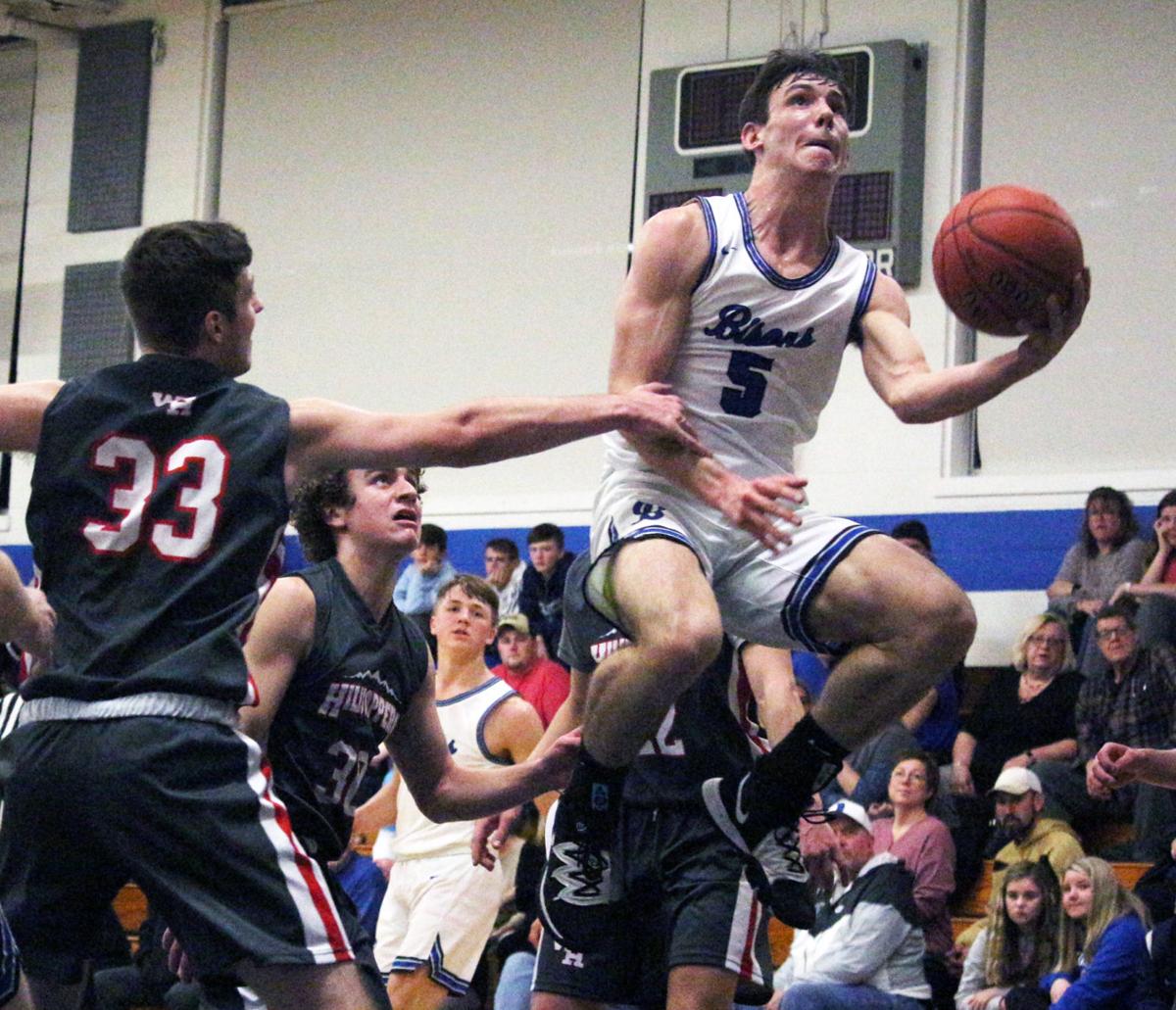 Bedford’s Steven Ressler, 5, goes up for a lay-up during the first quarter of Wednesday’s game against Westmont Hilltop. 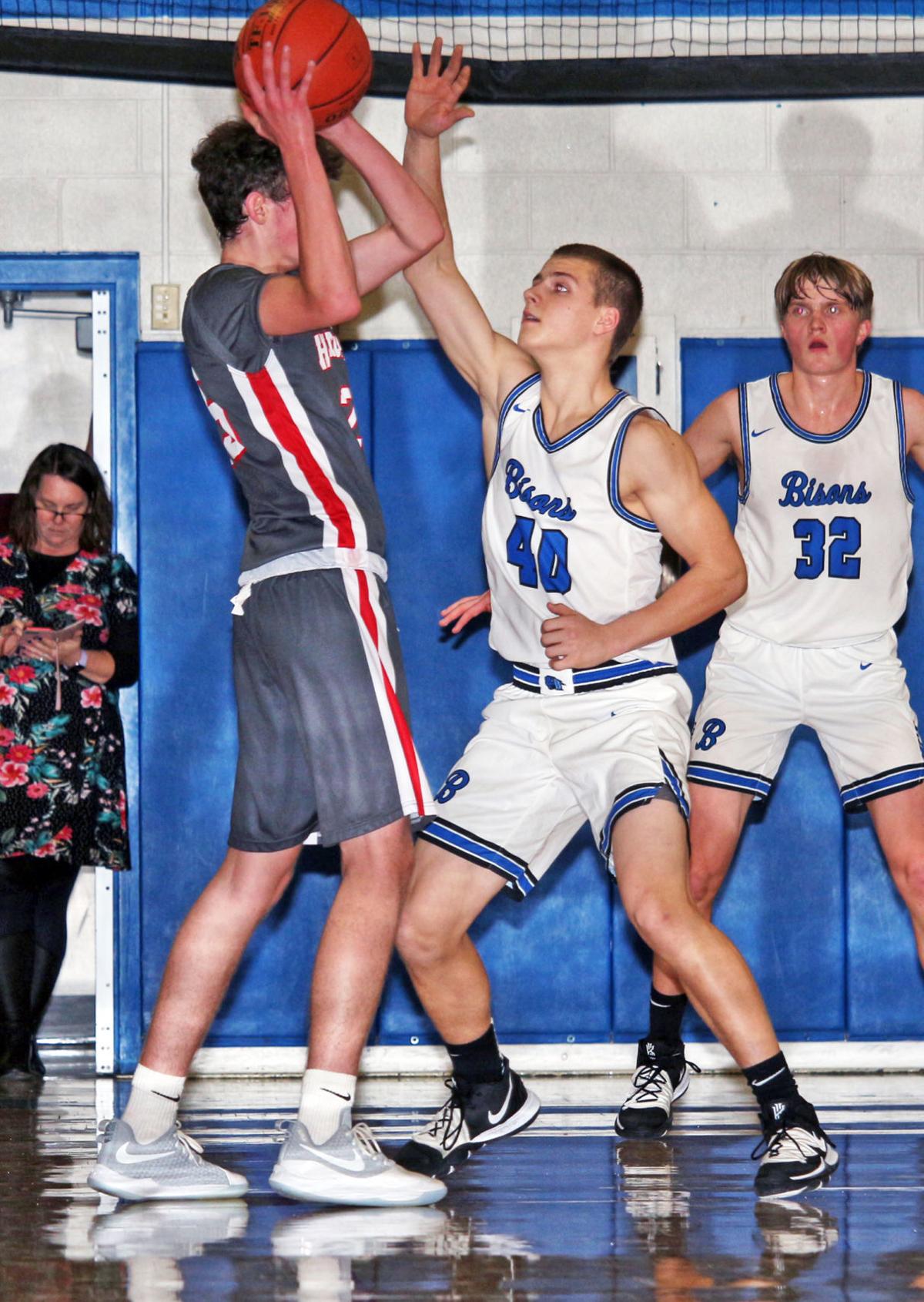 Bedford’s Spencer Ebersole, left, pitches a pass out to Joey Koontz, 22, during the second half against Westmont Hilltop, Wednesday.

Bedford’s Drew Hall dribbles the ball into the key during the first quarter against Westmont Hilltop, Wednesday.

Bedford’s Steven Ressler, 5, goes up for a lay-up during the first quarter of Wednesday’s game against Westmont Hilltop.

A combination of missed shots, turnovers, and mental miscues in the fourth quarter is what outdid Bedford in Wednesday’s 49-44 loss to Westmont Hilltop.

“We didn’t execute in the fourth quarter,” said Bedford coach Jason Ressler. “We had too many turnovers. We didn’t take care of the ball. We just fell apart. We need to learn how to close out games.”

The Bisons scored just once in the final period, going 1 for 10 from the field. The Hilltoppers rallied with a 15-point quarter, scoring six of their 11 attempt field goals.

The Bisons held a seven-point lead heading into the final quarter of play after the Hilltoppers went 1 for 4 at the free throw line as the third ended.

Ashton Fortson opened the fourth with a Westmont bucket before Bedford’s Mercury Swaim scored the only three points of the period for the Bisons.

In the remaining six minutes, Westmont erased Bedford’s 12-point lead, tying the game with 1:43 left. Landon Weeks scored his first of two free throw attempts to tie the game and gave the visitors the lead with he scored his second.

Tanner Civis scored eight points in the final quarter for the Hilltoppers, and he had a pair of putbacks as the game ended with the Hilltoppers winning, 49-44.

“I felt good about our offense going in,” the Bedford coach added. “We just lost it in the fourth quarter. We couldn’t get the job done.”

The game opened with the Bisons holding an 18-8 lead after the opening period.

Joey Koontz had four points in the Bisons’ game-opening 8-0 run, and following a Westmont basket, Steven Ressler added his second bucket of the night for the Bisons. Ressler led all scorers with 22 points.

Following a Westmont free throw, Swaim and Ressler added a three-pointer each, while Ressler sandwiched a lay-up between Westmont buckets as the Bisons led, 18-8.

Drew Hall added a lay-up for the locals as the second period began. The two foes went back and forth as they exchanged points.

Ressler added a run of six points to give Bedford its largest lead of the night of 16 points with 2:33 left, with the Bisons leading, 30-14.

Westmont closed out the opening half with a nine-point run. During the stretch, the Bedford head coach was called for a technical as he attempted for a timeout call with six seconds left. Bedford was being double-teamed and the coach tried to get a timeout to keep possession. In the midst of it all, Westmont’s Dylan Craft fell to the floor after being hit in the eye.

The Bisons lost possession of the ball a Westmont hit a free throw on the technical foul and added two free throws before the halftime.

Despite the nine-point stretch, the Bisons held a 30-23 lead.

Swaim, Hall, and Ressler started the second half with a five point run. Westmont added four points after the Bisons missed a pair of free throws. Ressler and Hall answered the five-points with four points for a 39-27 lead with 2:47 remaining in the third.

The two teams exchanged lay-ups before Westmont finished the third period with five points to cut Bedford’s lead to seven, 41-34.

“Wesmont is a good team. That was two good teams fighting,” noted the Bedford coach. “We just let that one slide. This is the second loss like this this year. Hopefully we’re getting smarter.”

Westmont Hilltop was 10 of 20 from the charity stripe, while Bedford was only 1 of 5.

Civis led all Westmont scorers with 19.