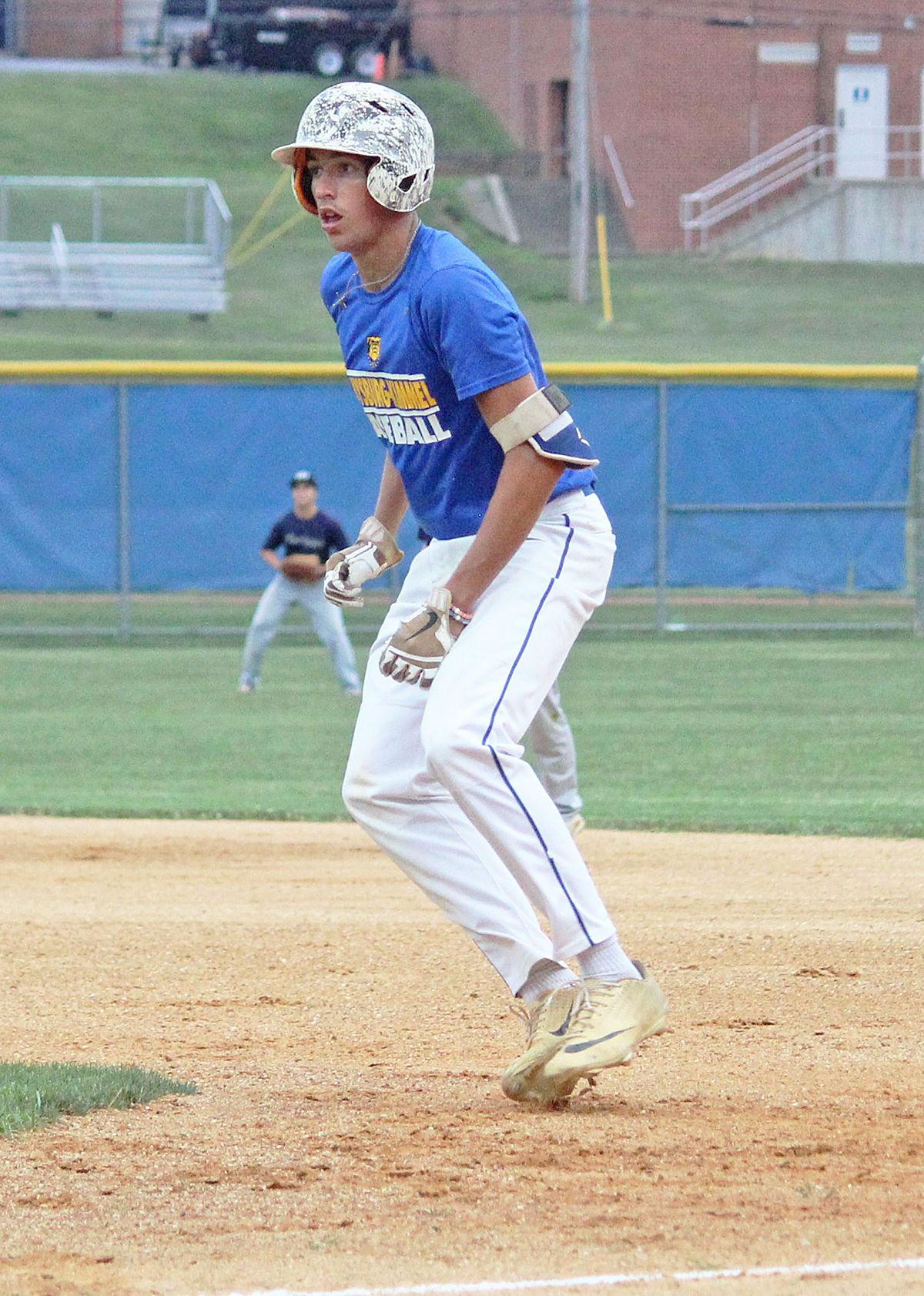 Claysburg’s Corey Chamberlain takes a lead off first base after getting an RBI single in the first inning, Thursday. 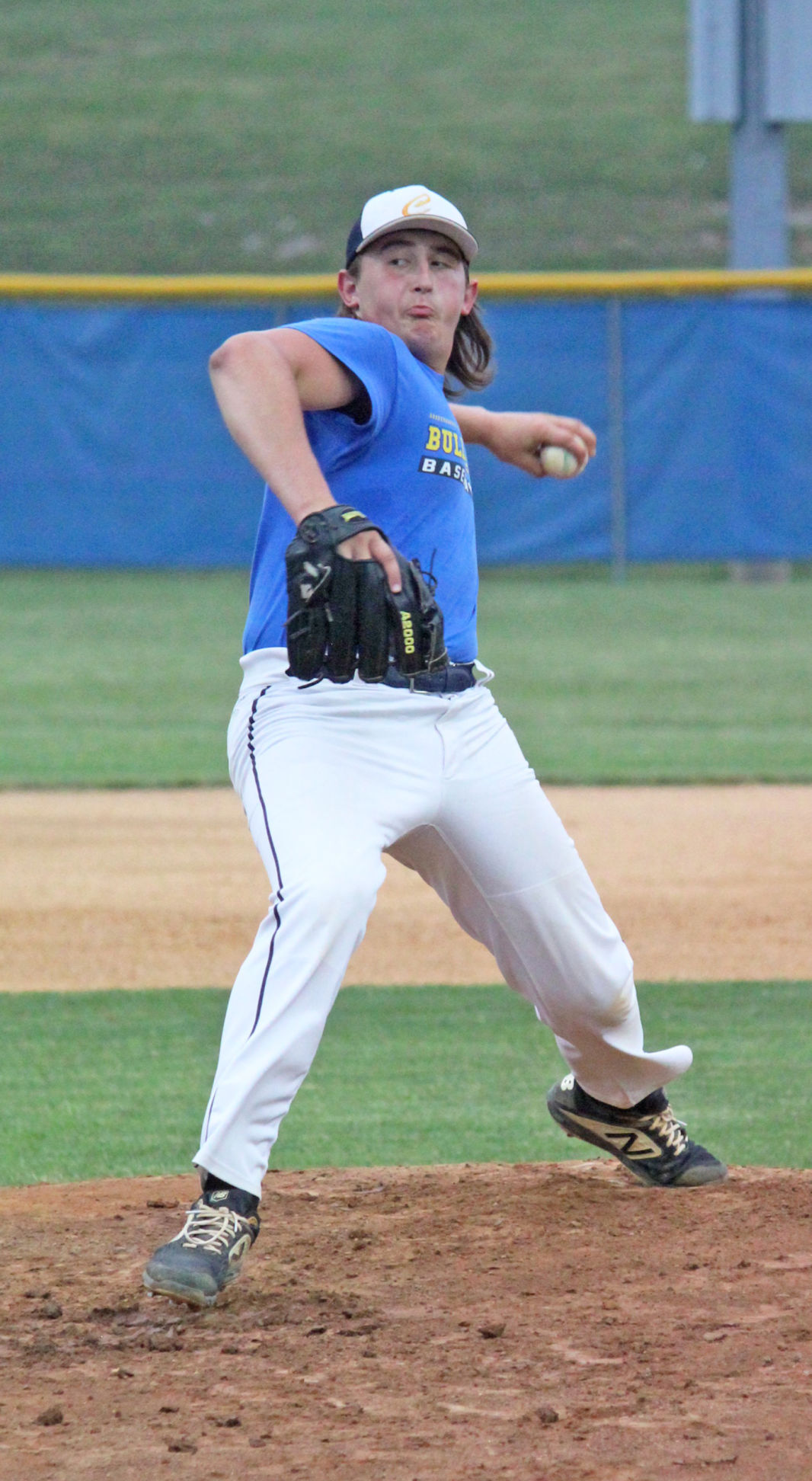 Claysburg’s Dylan Focht throws a pitch in the first inning of Claysburg’s 6-3 win over McConnellsburg, Thursday. It was Focht’s first time pitching this season.

Claysburg’s Corey Chamberlain takes a lead off first base after getting an RBI single in the first inning, Thursday.

Claysburg’s Dylan Focht throws a pitch in the first inning of Claysburg’s 6-3 win over McConnellsburg, Thursday. It was Focht’s first time pitching this season.

McCONNELLSBURG — For third time this year and second time in three days, the Claysburg baseball team played McConnellsburg on the road.

On Thursday, McConnellsburg again scored multiple runs in the first inning, but this time Claysburg fought back to take a 6-3 win over the host team and stay alive in the Cambria County Baseball League playoffs and eliminate McConnellsburg.

Claysburg and Bedford, the other remaining team from the league, will both represent the league in the Western Pennsylvania Baseball League Tournament starting on August 7.

On Thursday, Claysburg scored first with a run for an early lead, but McConnellsburg answered with three runs in the bottom of the first.

Rain came in and lasted the remainder of the game, making the ball and field a little sloppy.

That 3-1 lead held for the hosts until the top of the sixth inning. With one out, Seth Musselman and Lleyton Kling walked before Jacob Eberlin hit into a fielder’s choice that eliminated Kling, but Tanner Hall walked to load the bases.

Kyle Glass hit a soft line drive to right to plate both Musselman and Eberlin to tie the game. After a another walk loaded the bases again, a fly ball ended the inning.

McConnellsburg got the leadoff man on second on a throwing error by Claysburg, but Corey Chamberlain struck out the next three batters to get out of the inning unscathed.

Claysburg got the go-ahead runs in the seventh, but the Bulldogs did it in a most unusual manner. With two outs, Musselman was hit by a pitch as was Kling and Eberlin to load the bases. Hall came to the plate and was the fourth batter in a row to get hit by a pitch to bring in a run.

McConnellsburg changed pitchers, and Glass drew a walk to increase the lead to 5-3. Another pitching change for McConnellsburg brought up Dylan Focht to the plate, and he singled in Eberlin for the 6-3 lead.

McConnellsburg got a runner on base with a walk in the bottom of the seventh, but he never got past first as Claysburg earned the victory.

“We got down early and we never gave up,” said Claysburg coach Ben Chamberlain. “We battled back and picked up each other when we needed it. This is a great group of kids.

“Kyle Glass had a big hit for us in the sixth inning. I never saw anything like that seventh inning though.”

Both teams ended with only four hits, but Claysburg took advantage of 10 walks and five hit batters.

The Bulldogs had an early lead as Caleb Gampe had a two-out single and went to second on a wild pitch. Chamberlain lined a single to left to bring in Gampe with the first run of the game.

All six of Claysburg’s runs were scored with two outs.

It was big day for Focht, who took the mound for the first time in over a year following arm surgery and started the game for the Bulldogs. McConnellsburg greeted him with an infield single by Donovan Garlock before Focht got a strikeout for the first out.

Gabe Stotler walked and Lucas McClain was hit by a pitch to load the bases. Grayson Hall stepped to the plate and he was hit by a pitch as well, scoring a run. Luke Fitz, who was the starting pitcher for McConnellsburg, followed with a single to center for a 3-1 lead.

Corey Chamberlain came in to pitch and got out of the inning with a strikeout and a groundout. Chamberlain finished the game for the Bulldogs and earned the win. He allowed only two hits and one walk while striking out eight. He did not allow a McConnellsburg runner to reach third and only one made it to second.

“Corey threw really well for us,” said his father and coach Ben Chamberlain. “He had some big strikeouts for us.”

GAME NOTES: The game featured eight batters that were hit by a pitch including two with the bases loaded. … Claysburg left 12 men on base including the bases loaded three times. … McConnellsburg left seven men on base. … Kling reached base all four times with three walks and a hit by pitch. …Glass drove in three runs. … Only two of the four hits for McConnellsburg reached the outfield. … None of the Bulldogs batters in the bottom half of the lineup had a hit, but they scored five of the six runs. Musselman and Eberlin both scored two runs without getting a hit. … In the last two games against McConnellsburg, Claysburg allowed eight runs in the first innings and only one in the other innings combined. … McConnellsburg had scored only four runs in its last 20 innings.

Garlock faced on batter in the seventh