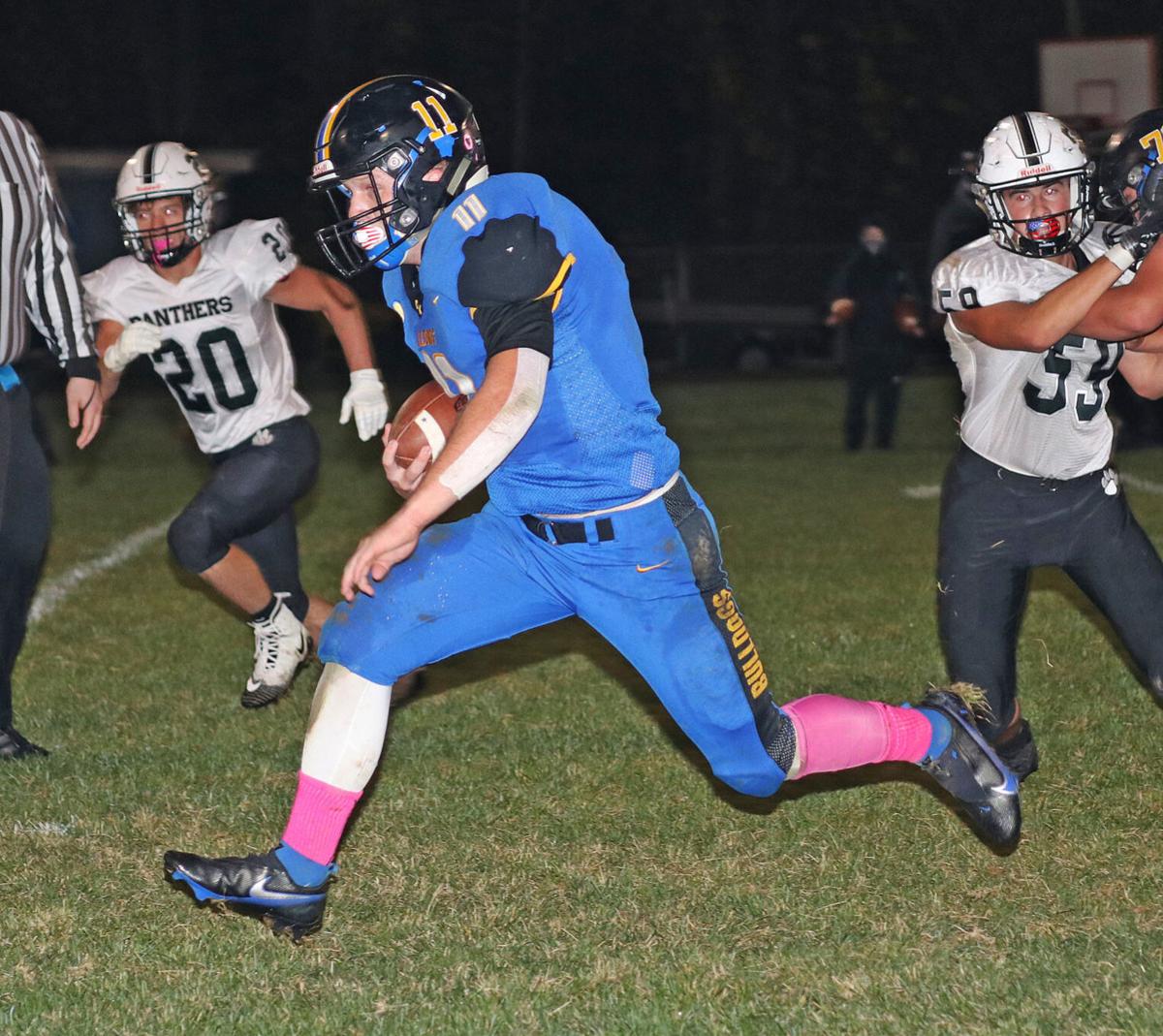 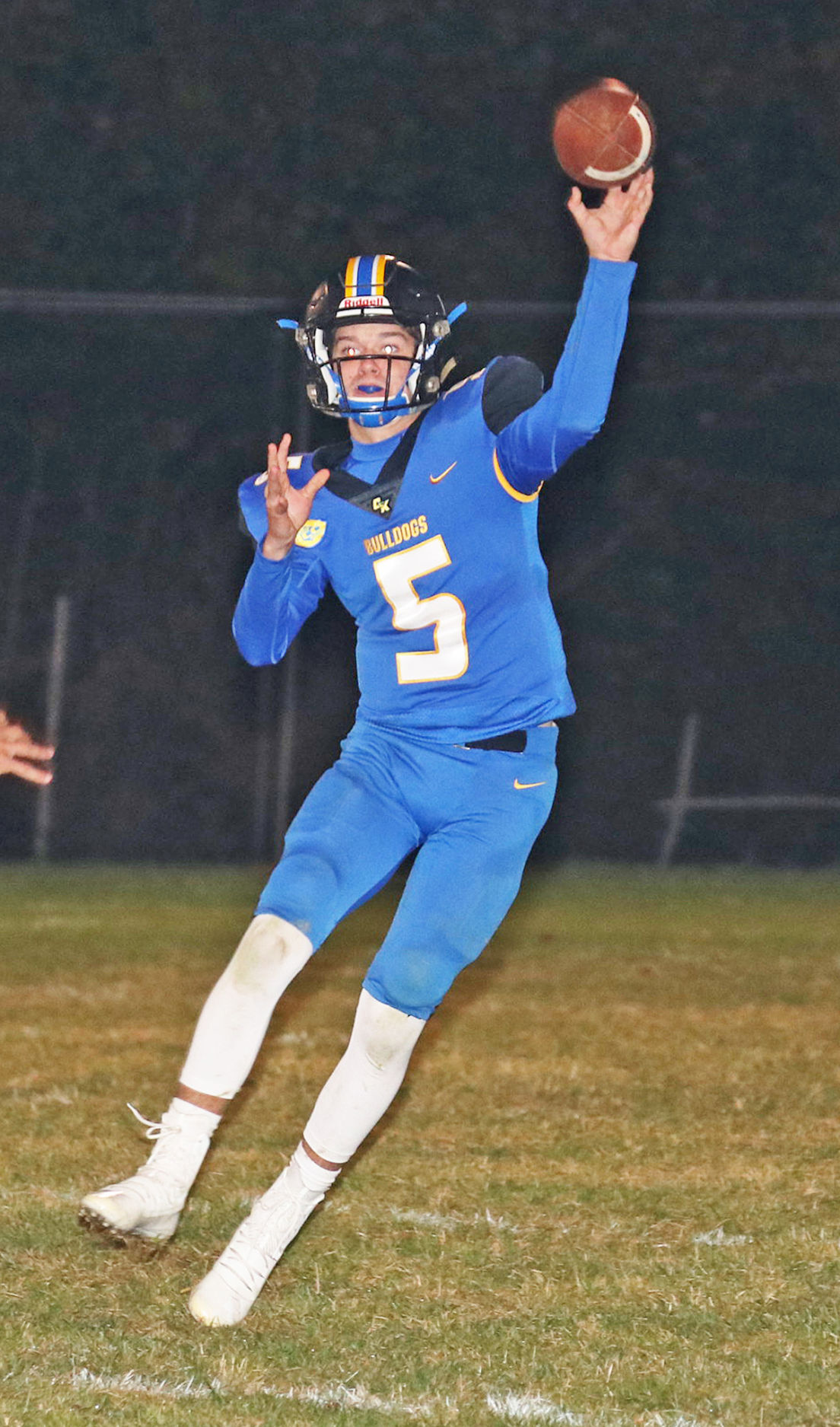 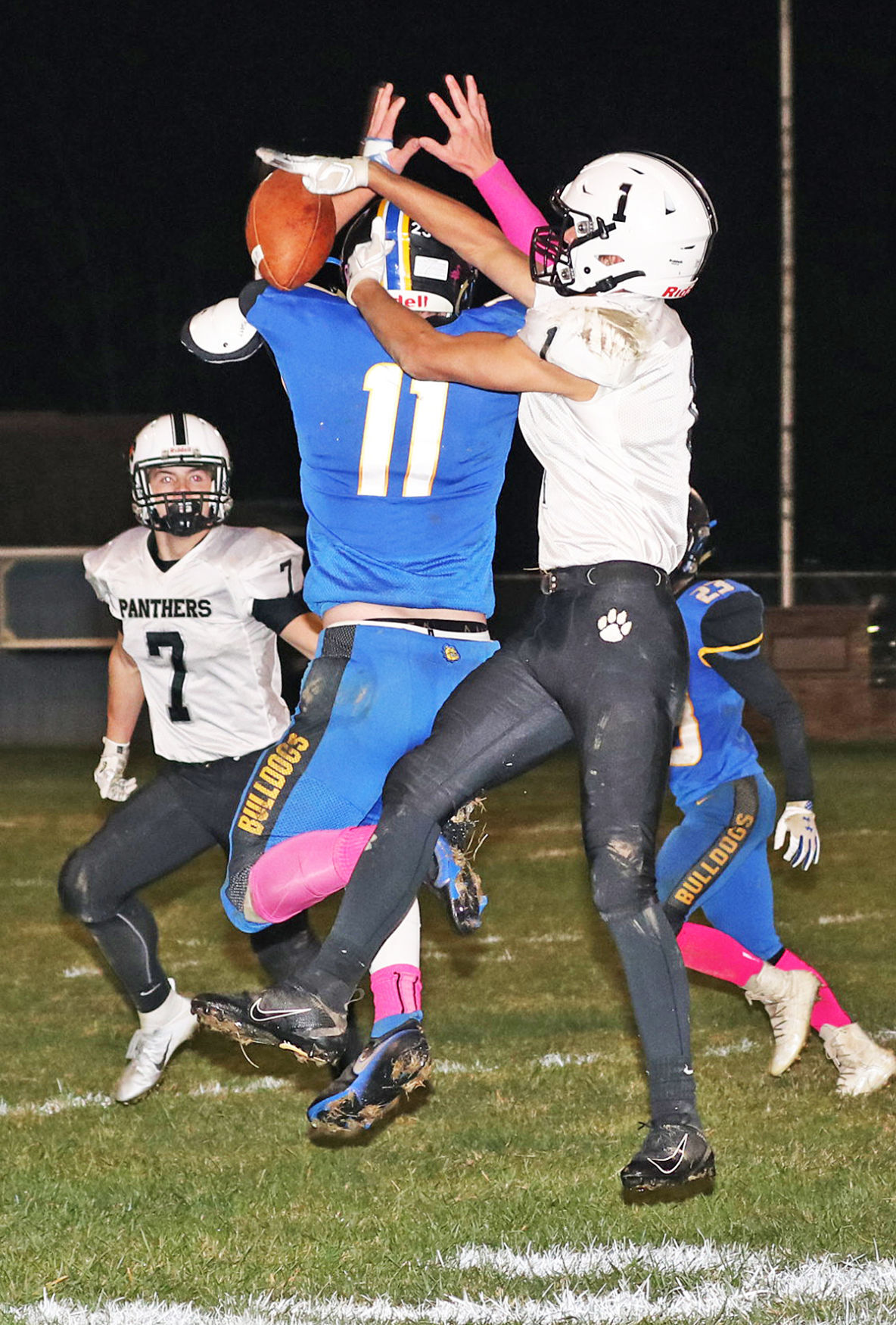 Northern Bedford’s Brady Clark, 1, breaks up a pass to Claysburg’s Pressten Imler, 11, during the first half, Friday. Clark was called for pass interference. 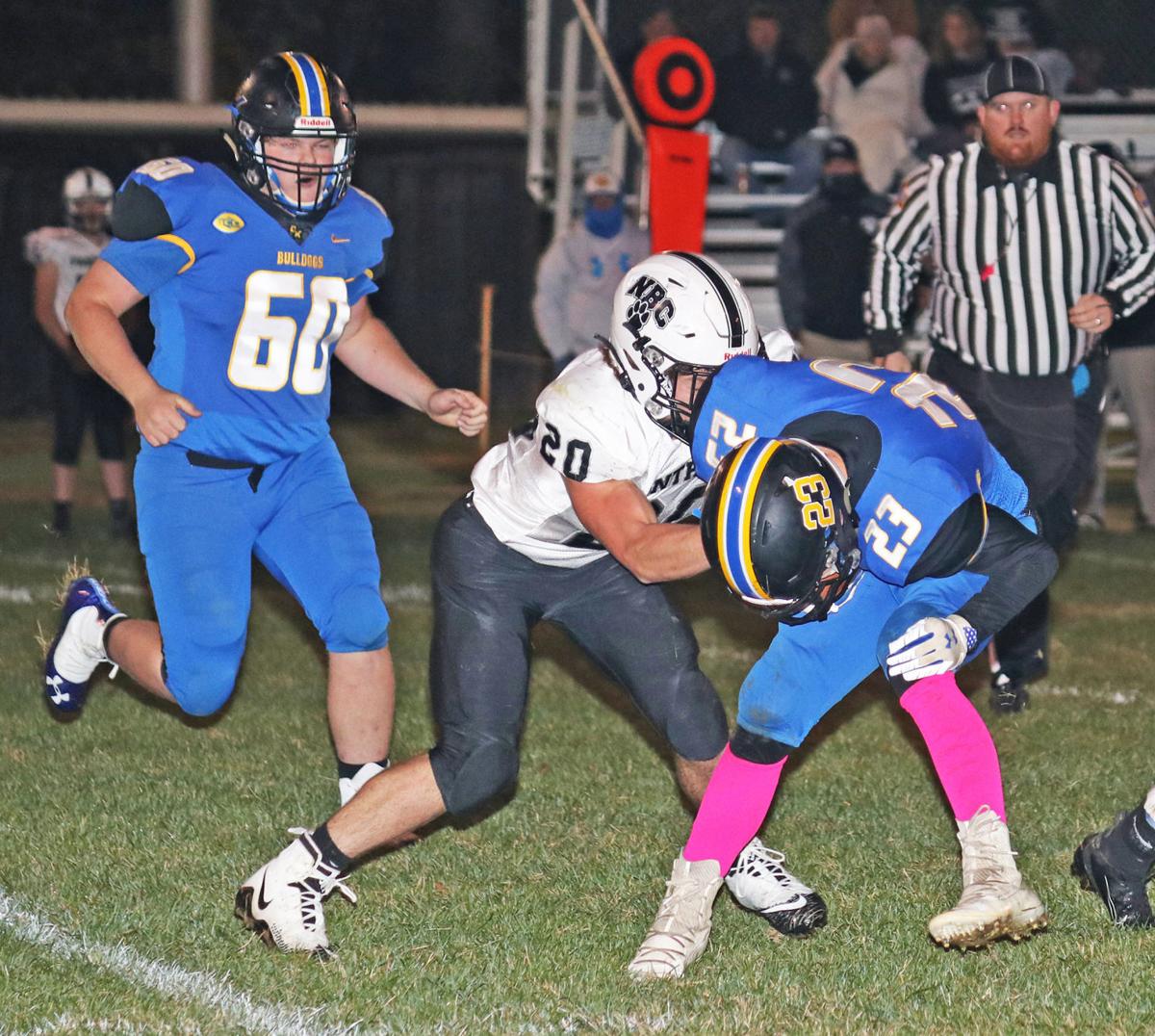 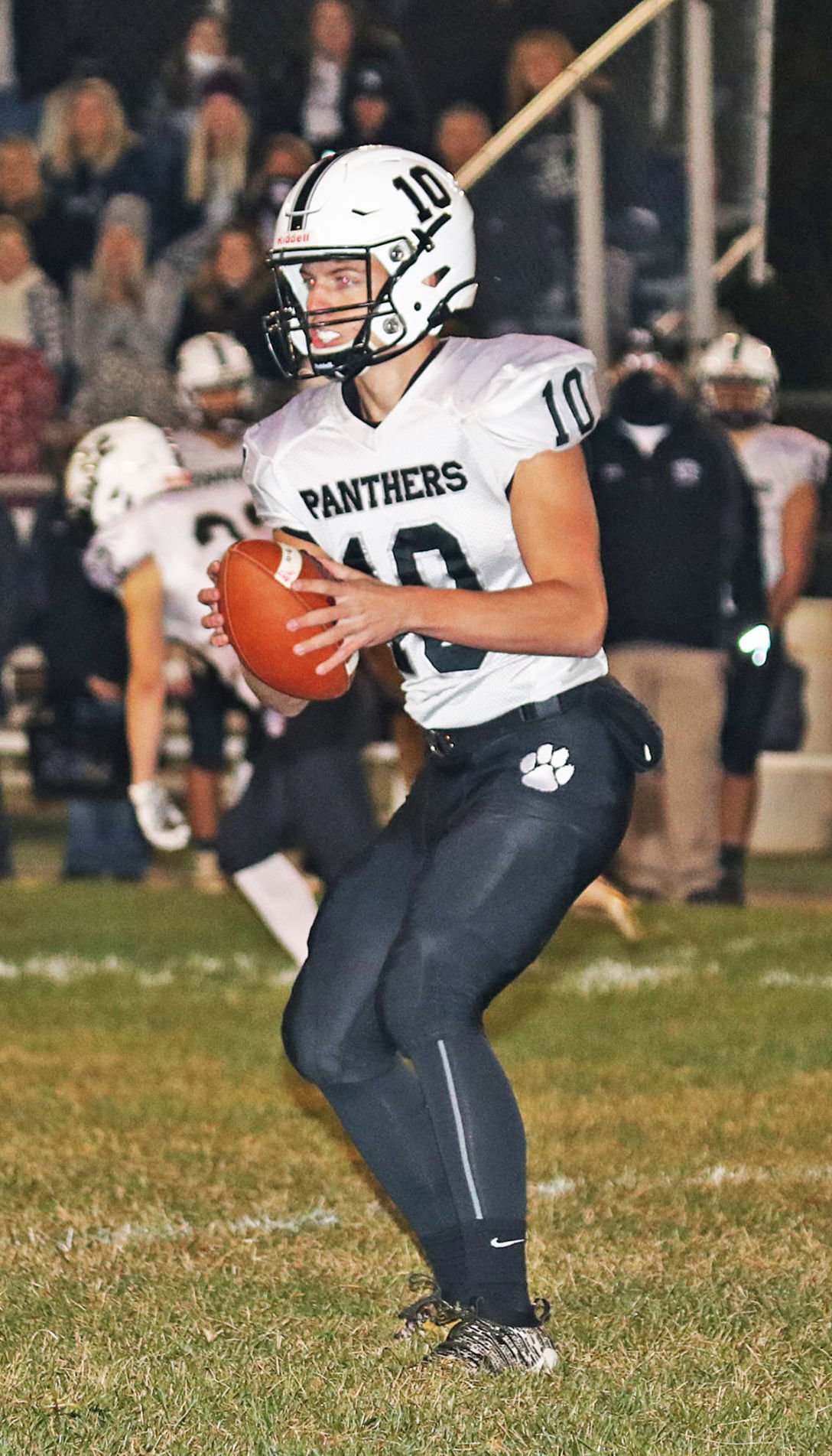 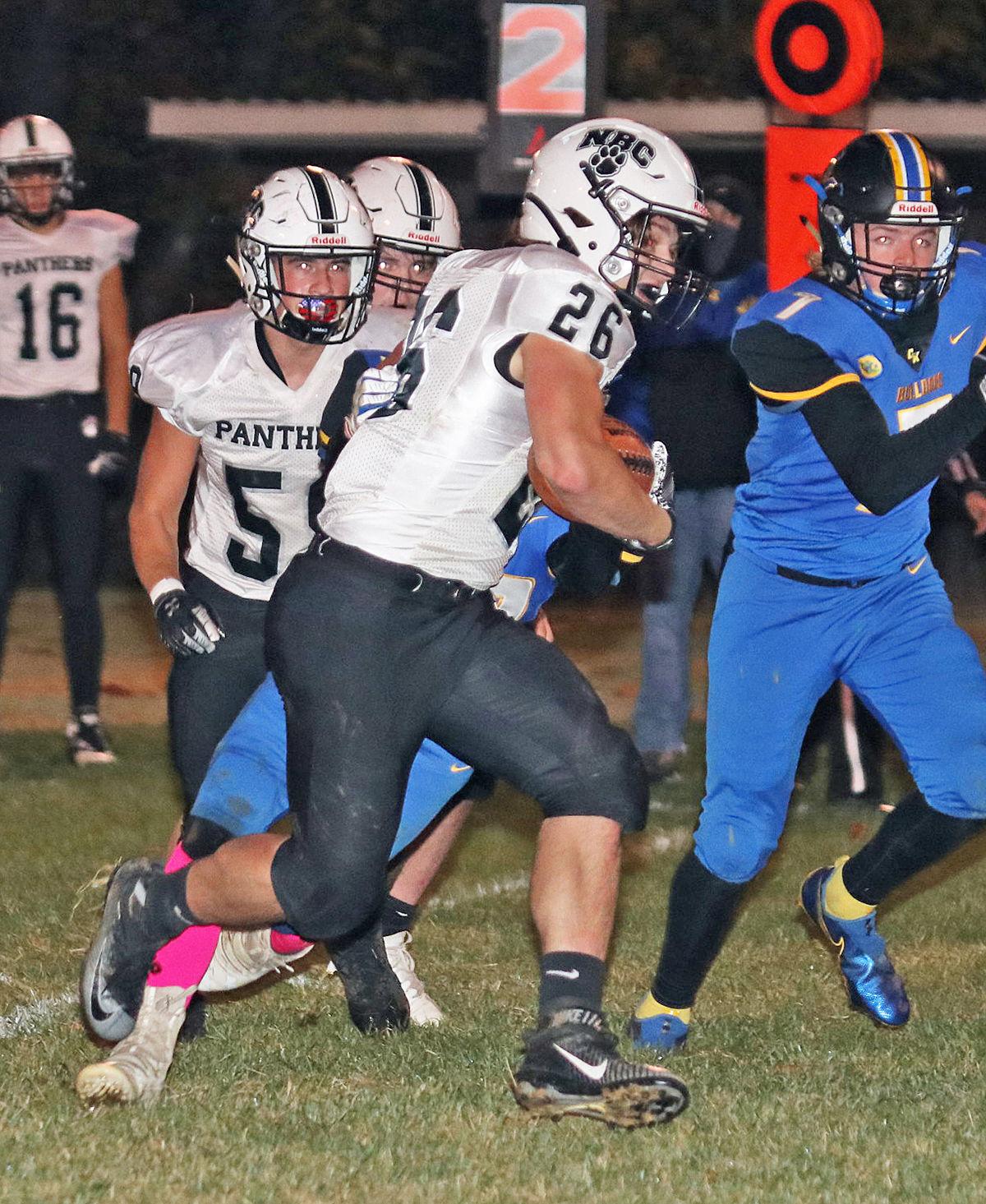 Northern Bedford’s Dalton Smith, 26, runs the ball down the field during the first half, Friday. 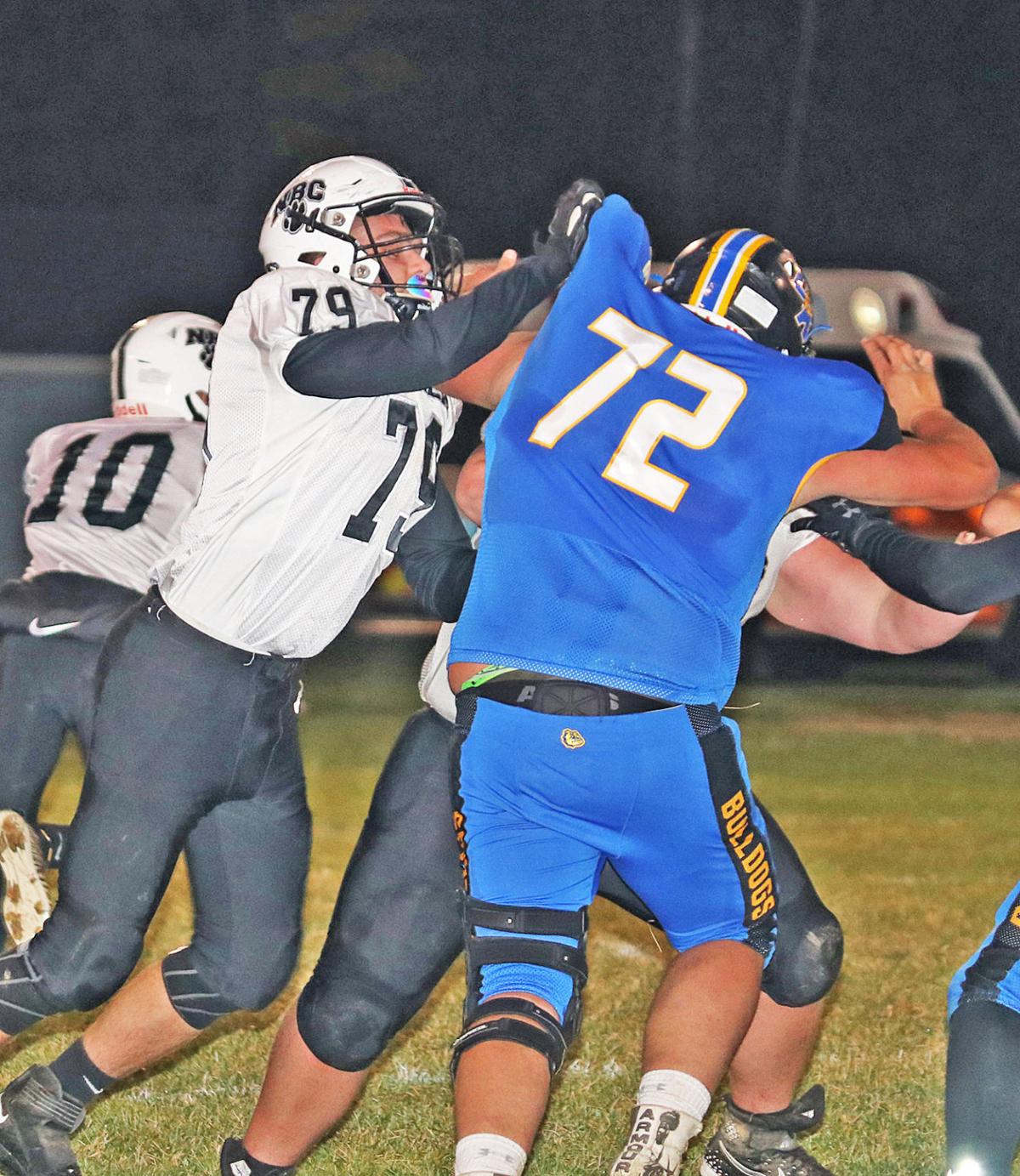 Northern Bedford’s Brady Clark, 1, breaks up a pass to Claysburg’s Pressten Imler, 11, during the first half, Friday. Clark was called for pass interference.

Northern Bedford’s Dalton Smith, 26, runs the ball down the field during the first half, Friday.

CLAYSBURG — The Northern Bedford football team has been a powerhouse in the Inter-County Conference this fall.

After falling to Bellwood-Antis in the opening week of the 2020 season, the Black Panthers have been an unstoppable force. That force rolled over Claysburg-Kimmel, 56-6, Friday.

“We knew we had a tough game against Bellwood,” said NBC coach Garry Black. “We talked about responding from that. Our goal was trying to get better each week from Week One. I think we’ve done that.

“We’ve gotten better each week in some aspect of the game. Tonight, it was adjustments at halftime. In the second half, Dakota Claar was absolutely terrific (on the defensive line).”

It didn’t take the Black Panthers long to get on the board, with Griffin Keller returning the opening kickoff. He scored on a 70-yard return just 12 seconds into the game. Following Collin Yeatts’ PAT kick, the Black Panthers held a 7-0 lead.

“That’s exciting for Griffin Keller,” Black added. “He’s a little guy that’s fast. I’m proud he got an opportunity and made the most of it.

“That jump-started things. That’s a great way to start a football game.”

Northern Bedford added its second score of the first quarter late in the period.

The Bulldogs turned the ball over on downs, and the visitors took over on their own 26.

Cadin Ebersole had a run of seven yards and a reception for four yards for a first down. After two plays resulted in no yardage, Thad Leidy hit Brooks Snider for an 18-yard pass. The NBC QB added another 11-yard pass to Brady Clark to push the Black Panthers to the CK 34.

After a small run by Smith, Ebersole broke open for a 20-yard run and was pushed out of bounds at the CK 7.

Evan Clouse was tackled at the CK 1 before a five-yard penalty moved the line of scrimmage back to the CK 6 for the Black Panthers.

Leidy found Clouse in the end zone for a score. Following Yeatts’ PAT kick, the visitors were up, 14-0.

Ebersole scored on a 30-yard pass from Leidy with 10:06 left in the first half before Smith scored with 6:29 remaining in the opening half on a 40-yard run.

“We’re experiencing a lot of growing pains we didn’t think we were going to be making this season,” said Claysburg coach Matt Bilchak. “I’m proud of the consistent effort. Scoring helps, but we have a ways to go to rebuild where we were at. We’re seeing that through the effort that we’re putting forth. Being able to string drives together is part of that.

“The turnovers bit us in the rear end tonight. I was happy we were able to generate a few turnovers and get the ball back a couple of times that we haven’t been able to the last couple of weeks.”

The visitors added their third score of the quarter with no time left on the clock. This time, Smith scored on a 56-yard pass from Leidy.

The Bulldogs hadn’t scored since their Week Three loss to Southern Huntingdon, 18-7. That changed with 17 seconds left in the opening half.

Preston Bush had a rush for nine yards, while Cole Claycomb picked up a firest down for the hosts on a four-yard run. Pressten Imler picked up a first down and put the hosts inside Black Panther territory on a pair of runs for 12 yards.

Bush and Imler added first downs to put the Bulldogs 15 yards away from points.

After a loss of yardage, Claycomb had a run of six yards. Imler added another run for six yards before Bush picked up two yards. Claysburg QB Caleb Oakes handed the ball to Claycomb and the Bulldog trotted in for the five-yard touchdown. The PAT kick was no good, but the hosts were finally on the board, 29-6.

Claysburg opened the second half with the ball and got the ball down to the NBC 28 before the drive stalled out and the hosts turned the ball over on downs.

Following two plays and a penalty, the Bulldogs picked off the pass as Bush recorded an interception.

Claysburg got the ball to the NB 19 before Smith intercepted the ball at the NB 5. He ran the ball in for a 95-yard touchdown with 3:20 left in the third quarter.

Northern Bedford added its final touchdown in the fourth quarter, this time on a two-yard run by Keller.

The Bulldogs had an explosive kickoff return by Imler, putting them at their own 48. Following three rushes for 24 yards, the Bulldogs lost a fumble and the Black Panthers went on to win the game, 56-9.

“We had lots of guys doing great things for us,” Black noted. “Each and every week that’s the way it’s been. It continues to be that way with different guys making plays. I’m happy with how it played out for us.”

Despite the all of the adversity the Bulldogs have faced this season, Bilchak sees a growth from his youthful squad.

“The only sad thing is I wish it would translate into more point and wins. There’s a game bigger than what we’re playing right now. I’m pleased with the progress these kids are making.”

Northern Bedford, 5-1, hosts Conemaugh Township next Friday in the opening round of the District 5-A playoffs. The winner of that game advances to the final against Tussey Mountain. That game will be held on Thursday, Oct. 29 at Bedford.

The Bulldogs, 1-5, host Everett next week.