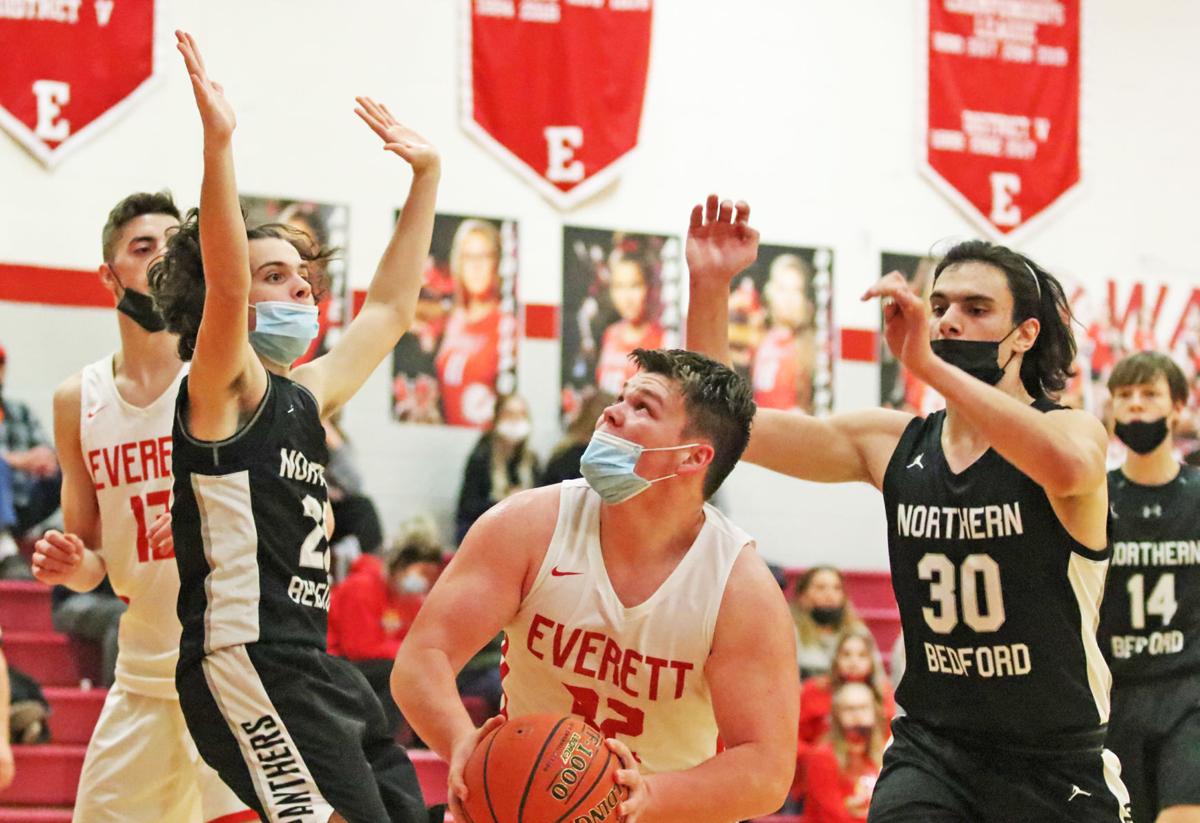 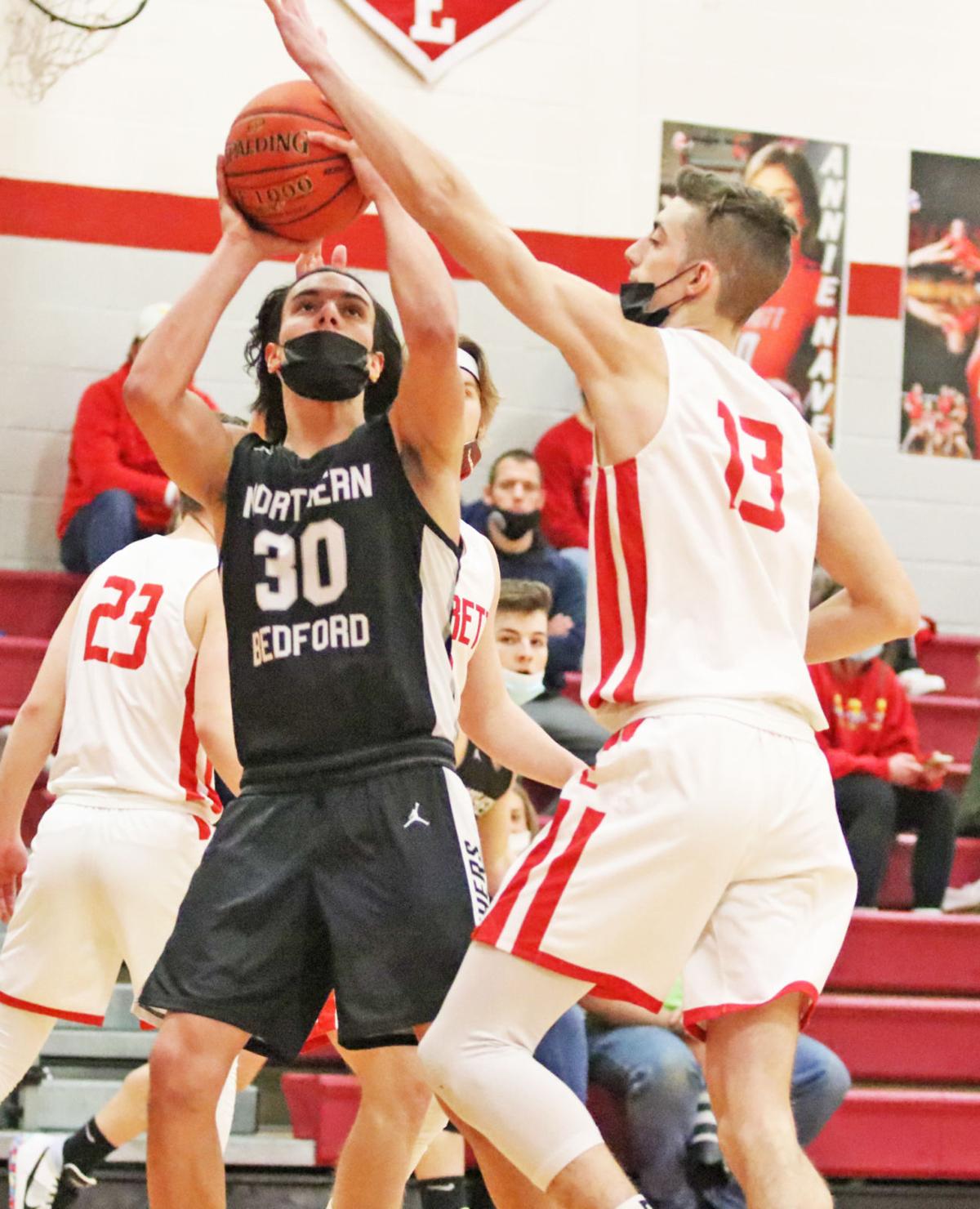 Northern Bedford’s Dakota Claar, 30, gets a shot off past Everett’s Brandon Mills during the first quarter, Friday. 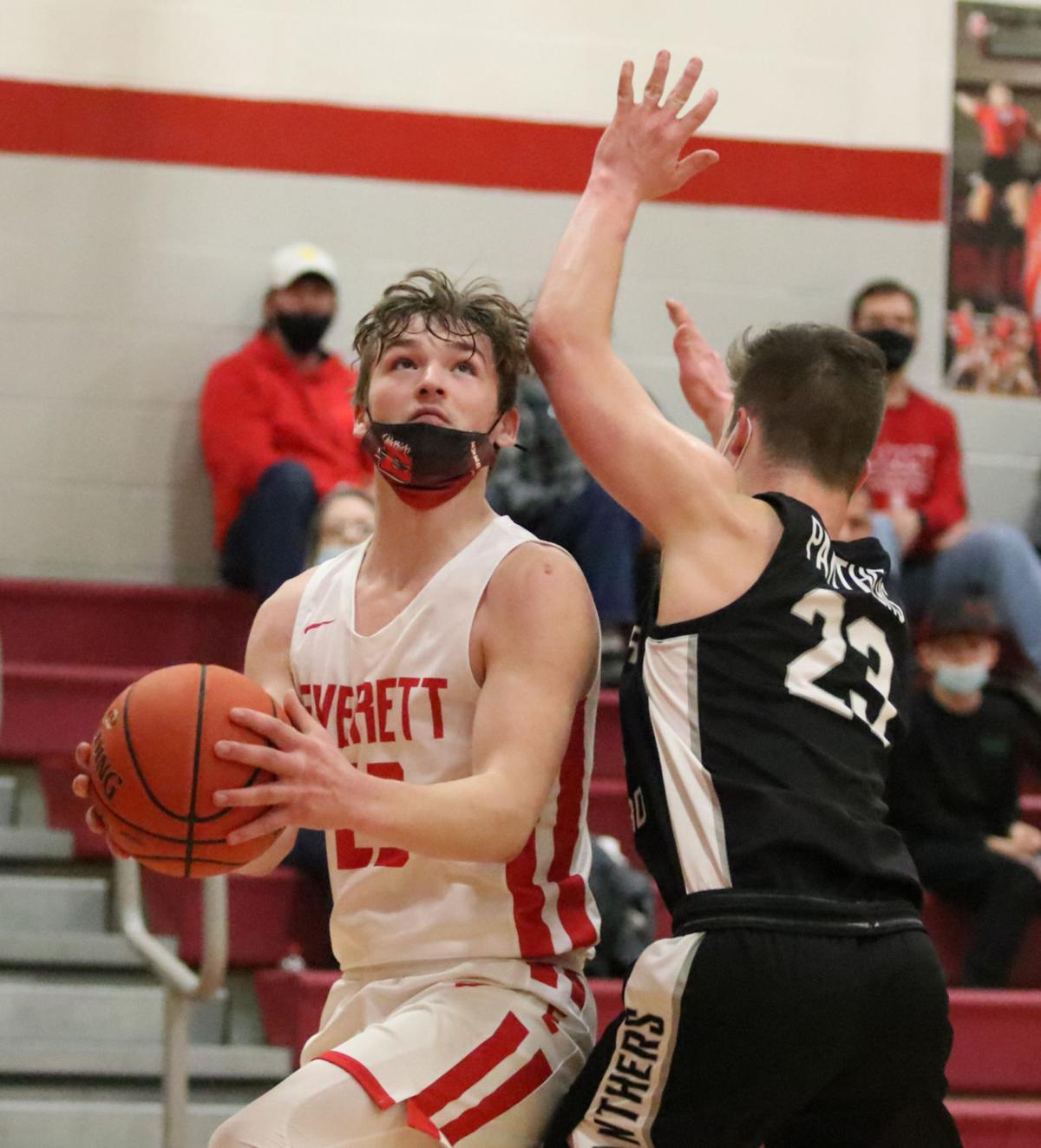 Everett’s Dylan Jesk, left, gets past Northern Bedford’s Haden Reyan as the Warrior scored on a lay-up, Friday.

Northern Bedford’s Dakota Claar, 30, gets a shot off past Everett’s Brandon Mills during the first quarter, Friday.

Everett’s Dylan Jesk, left, gets past Northern Bedford’s Haden Reyan as the Warrior scored on a lay-up, Friday.

EVERETT — The last time Northern Bedford and Everett faced one another in boys’ basketball action, the Black Panthers used a timely run late in the game to blow the Warriors out.

Even though the visiting Black Panthers snagged a late-game run, the Warriors did not fold as easily as they did earlier in the season.

Both teams had runs late in the game with the Black Panthers holding on for a 69-68 victory.

The last time the two foes faced one another, Northern Bedford used a strong run to upend the Warriors, 67-54.

“The last time we played, the game was close until there was about three minutes, and we went on a run to break it open,” said Northern Bedford coach Randy Meck. “Other than that, it was a close game.

Calvin Iseminger put the Warriors ahead with a bucket before Northern Bedford’s Hayden Foor scored a pair of free throws to keep the game deadlocked.

Northern Bedford’s Foor and Diehl pushed the visitors ahead after a four-point run by Everett, 39-37.

Brandon Mills scored a three for the Warriors, and after a Northern bucket, Dylan Jesk kept the Warriors ahead with a free throw.

Diehl, Foor, and Dakota Claar added a trio of buckets to push the visitors ahead, 48-42, with 3:31 left in the third quarter.

After a pair of Jesk free throws, Diehl scored his 1,000th career point with 2:04 remaining in the third quarter, and that bucket was the start of a seven-point run for the Black Panthers, pushing the visitors ahead by 10 points. The two teams exchanged buckets as the visitors led, 59-49, at the end of three quarters.

In the third quarter, Everett kicked off a 13-point run with lay-ups by Jesk and Josiah Seese. Iseminger, Mills, and Jesk added buckets during the end of the run for a 64-60 lead with 3:40 left in the game.

Diehl got a putback and Thad Leidy tied the game with a steal and a lay-up, as the Black Panthers tied the score with 2:44, 64-64.

Seese added a pair of free throws after being fouled by Leidy with two minutes left in the game.

Northern took back the lead as Foor scored three points in a six-point stretch. Iseminger got a lay-up with 11 seconds to go, but the Black Panthers held on to the ball to ensure the 69-68 victory.

“It was back-and-forth,” Meck noted. “We got the lead to 10. We took a couple of bad shots and gave up a couple of turnovers. Everett made us pay for it.”

“This was a pretty good high school basketball game. It’s disappointing to have lost it. Hayden (Foor) had a really big night. So did Dakota (Claar). They left him free a couple of times. They played a whale of a game. When it counted they made plays and we didn’t.

“We only had five turnovers in the second half, but at the beginning of the second half, we had a bad stretch. We turned the ball over several times that gave Northern easy baskets. You just can’t do that in these kinds of games when you’re evenly matched.”

The Warriors held a 16-15 lead at the first quarter, with Iseminger leading the way with 12 of those points. Foor paced the Black Panthers in that period with six points, while Claar added five.

Both teams went toe-to-toe in the second quarter as the two teams remained tied at the half, 31-31.

Foor led all scorers with 31 points, while Claar added 19, and Diehl finished with 11 points for Northern Bedford.

Four of the six Warriors which played scored and all four were in double digits. Iseminger led the Warriors with 28 points, while Mills, Jesk, and Seese followed in order with 16, 13, and 11 points, respectively.

Both teams host on Thursday for the opening round of the District 5-AA playoffs. The third-seeded Black Panthers hosts sixth-seeded Tussey Mountain, while fourth-seeded Everett welcomes fifth-seeded Meyersdale.

The victor of the Everett-Meyersdale quarterfinal faces top-seeded Conemaugh Township, while the winner of the Northern Bedford-Tussey Mountain quarterfinal visits second-seeded Windber. The semifinals will be next Wednesday.