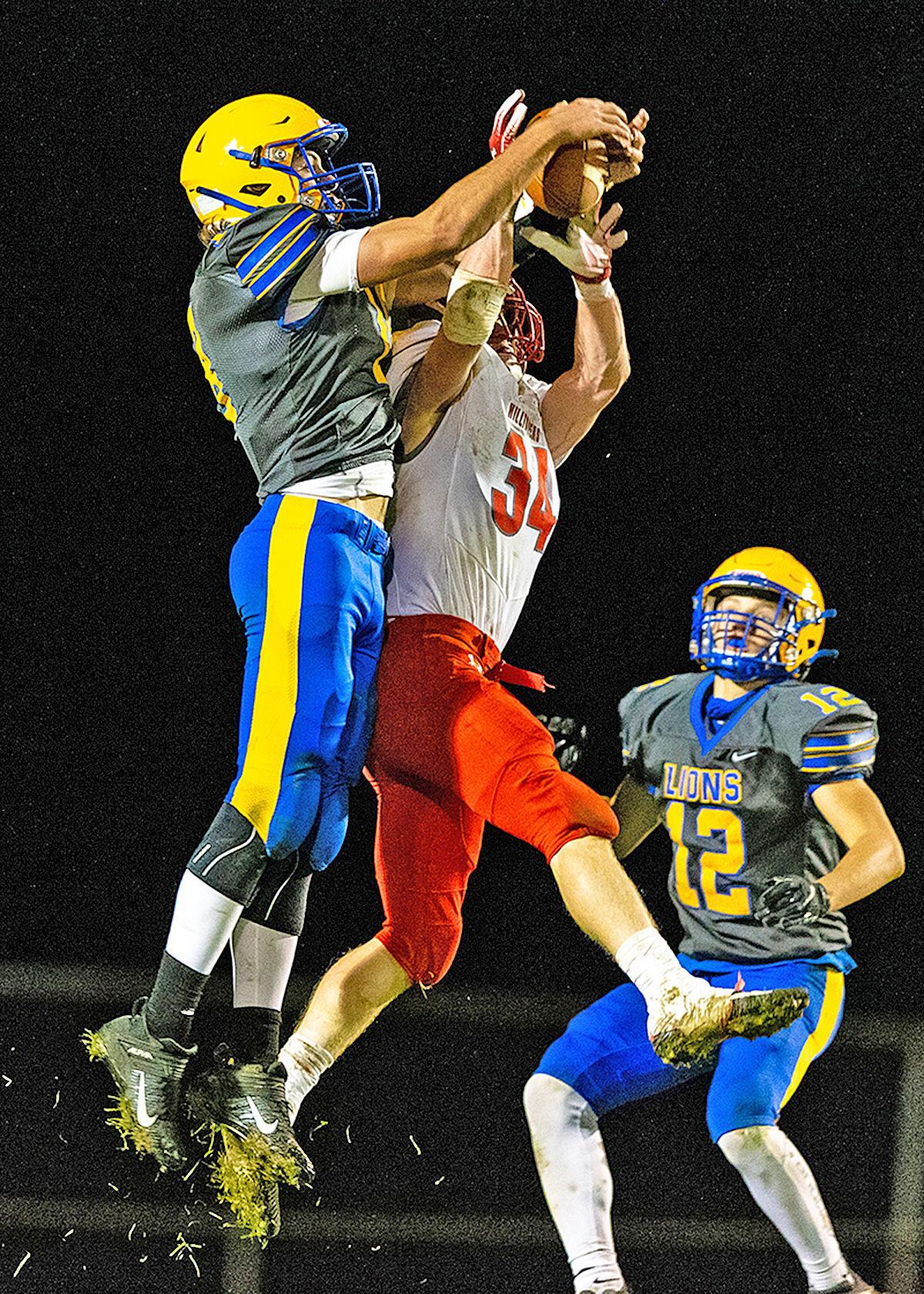 Chestnut Ridge’s Logan Pfister, 18, and Westmont Hilltop’s Hudson Holbay go up for a pass in the fourth quarter, Friday. 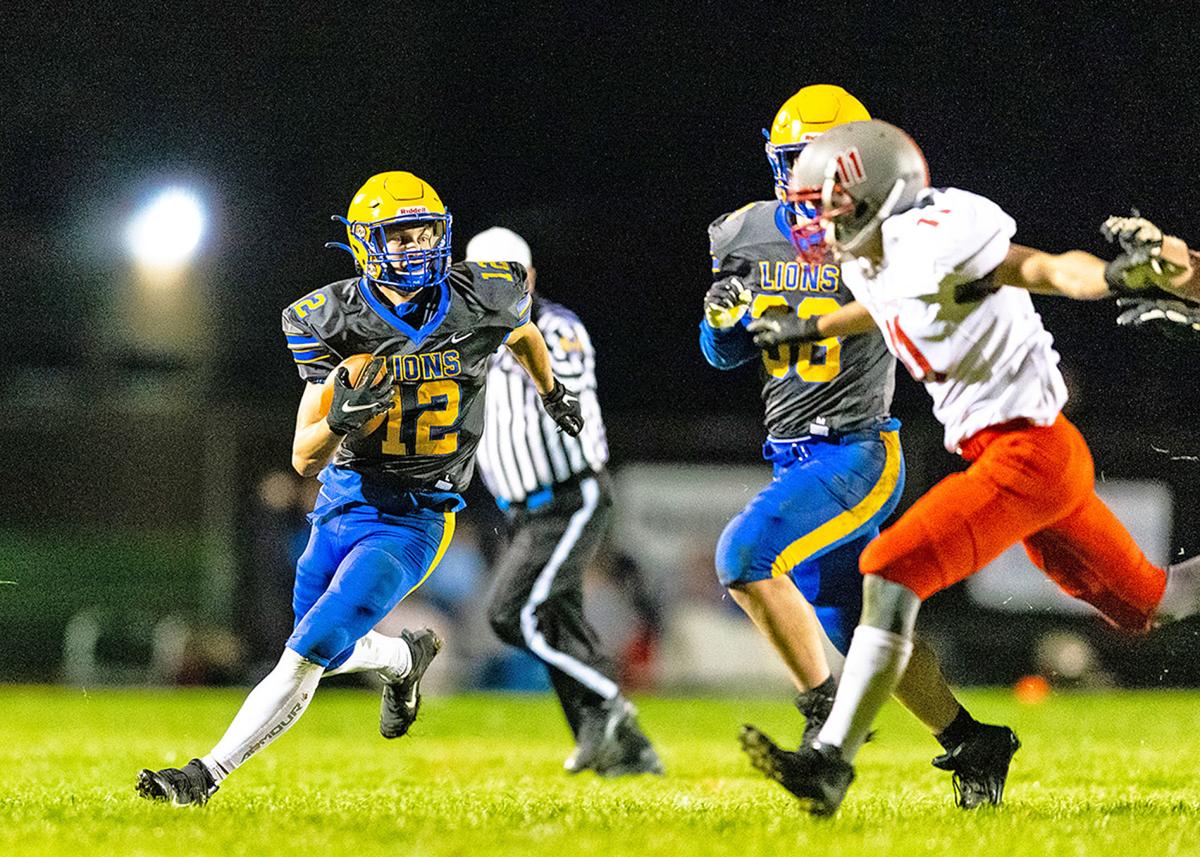 Chestnut Ridge’s Matt Whysong runs in the open field in the third quarter of the Lions’ 28-7 win, Friday. 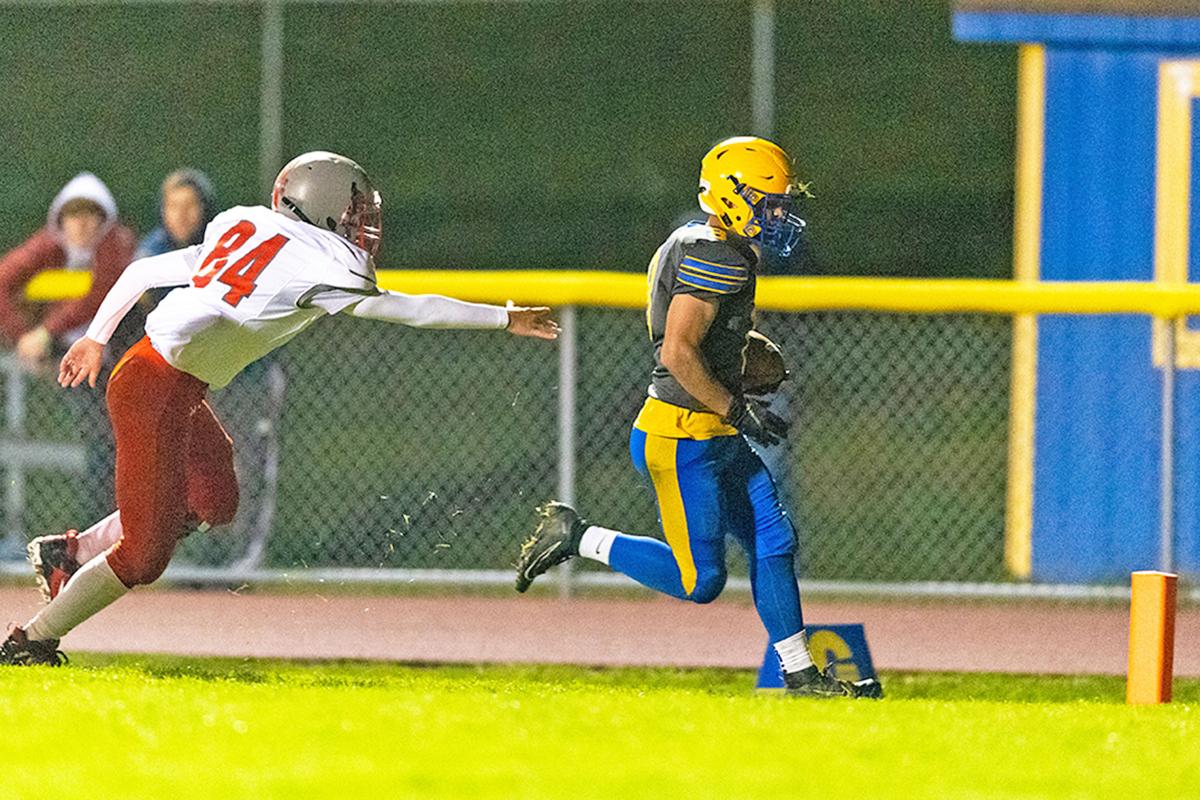 Chestnut Ridge’s Trevor Weyandt races into the end zone for a touchdown run in the third quarter against Westmont Hilltop, Friday.

Chestnut Ridge’s Logan Pfister, 18, and Westmont Hilltop’s Hudson Holbay go up for a pass in the fourth quarter, Friday.

Chestnut Ridge’s Matt Whysong runs in the open field in the third quarter of the Lions’ 28-7 win, Friday.

Chestnut Ridge’s Trevor Weyandt races into the end zone for a touchdown run in the third quarter against Westmont Hilltop, Friday.

FISHERTOWN — It was billed as a battle of the big-play offense of Chestnut Ridge against the ground and pound running game of Westmont Hilltop in an LHAC matchup, Friday night.

The Hilltoppers got its running game going, but the Lions used three different types of touchdowns for scores of 14 yards or longer in a 28-7 victory.

Chestnut Ridge ran only 12 offensive plays in the first half, but the Lions had a halftime lead.

“Westmont has its own style of play,” said Chestnut Ridge coach Max Shoemaker. “We gave up some yards, but we made some plays when we needed them.”

After forcing a Westmont punt on the Hilltoppers’ first drive, the Lions got the ball at their own 30-yard line. Matt Whysong raced 12 yards on a quick pitch for a first down, and two plays later, Logan Pfister faked the quick pitch and ran to the outside. After getting about 20 yards downfield, he weaved his way through several defenders unscathed and finished off the 59-yard run in the end zone for the opening score.

Jack Moyer’s PAT kick gave the Lions a 7-0 lead with 4:17 left in the first quarter.

After Westmont failed to get a first down, Ridge got the ball in the 50 after the punt. The Lions moved down the field, but a penalty hurt the Lions and forced them into a third and 18. Pfister rolled out and threw the ball to Weyandt. The junior bobbled the ball, hauled it in, and raced past the first-down marker. However, he fumbled the ball with Westmont recovering the ball at the one-yard line.

Westmont had to punt again on its next possession. David Assad’s punt landed in the hands of Whysong at the Westmont 49. He took off to his right and raced down the Westmont sideline untouched for a 49-yard punt return. Moyer’s kick made it 14-0 with 7:06 left in the first half.

The Hilltoppers used most of the rest of the half to get their only score of the game. Starting at their own 40, the Hilltoppers ran 12 straight times to get the 60 yards necessary. Hudson Holbay had two runs of 11 yards on the drive and added a one-yard plunge into the end zone with 43 seconds left in the first half. Assad’s PAT made it a 14-7 deficit.

Ridge returned the kickoff to the Westmont 40. A Westmont penalty gave the Lions a first down, but as time was running low in the half, the Lions attempted a 37-yard field goal. Moyer’s kick just missed and the Lions held a 14-7 lead at the half despite only running 12 plays on offense to 30 for the Hilltoppers.

“We felt good at the half, and we knew we were getting the ball back to start the second half,” Shoemaker added. “Special teams played well, and that punt return was big. Our special teams needs to play a bigger role for us. The kickoff coverage was good tonight.”

The Lions opened the second half with their only sustained drive of the game. Starting at their own 40, the Lions got a big third-down reception by Weyandt to get the ball into WH territory for a first down. The Lions used their running attack to get the ball deep into Hilltopper territory. With a second down at the 14, Weyandt took a quick pitch to the short side of the field and ran into the end zone for the score for a 21-7 lead with 7:19 left in the third quarter.

The Lions added another score just a couple minutes later when Westmont’s Roy Dunn fumbled the ball. Whysong picked it up at the 50, looked around and raced to his right, avoiding several Hilltopper attempts at tackles and getting into the end zone for the second time on the night. Moyer’s kick made it 28-7 with 5:32 left in the third quarter.

Westmont drove down the field, getting the ball into Ridge territory, but a penalty put the Hilltoppers in long third and fourth down situations. The Lions held and got the ball back.

The Lions put together a drive into Westmont territory, but Hilltopper Konlee Mastovich stepped in front of Pfister pass for an interception with over six minutes left in the game.

Westmont used most of the rest of the game getting the ball into Lion territory again, but a Westmont pass hit off a players foot and bounced up into the hands of Ridge’s Brennen Shroyer for an interception to seal the win for the Lions.

“The fumble return was big for us, and we had two non-offensive touchdowns,” Shoemaker added.

GAME NOTES – Chestnut Ridge, 4-2, will play next week against an opponent that will be determined this weekend. The Lions were to play Richland, but the District 6-AA playoffs start next weekend with the Rams participating in them. … Westmont ran for 234 yards with Holbay running for 88, and both Ray and Muto adding 70 apiece. The Hilltoppers completed only two passes for a total of zero yards. … Pfister led the Lions with 69 yards rushing, and he threw for 73 more. … Westmont ran 58 offensive plays to only 32 for the Lions. Ridge outgained the Hilltoppers, 242-234, in total yardage. … Both teams had two turnovers and four penalties. … Chestnut Ridge did not put in the game.