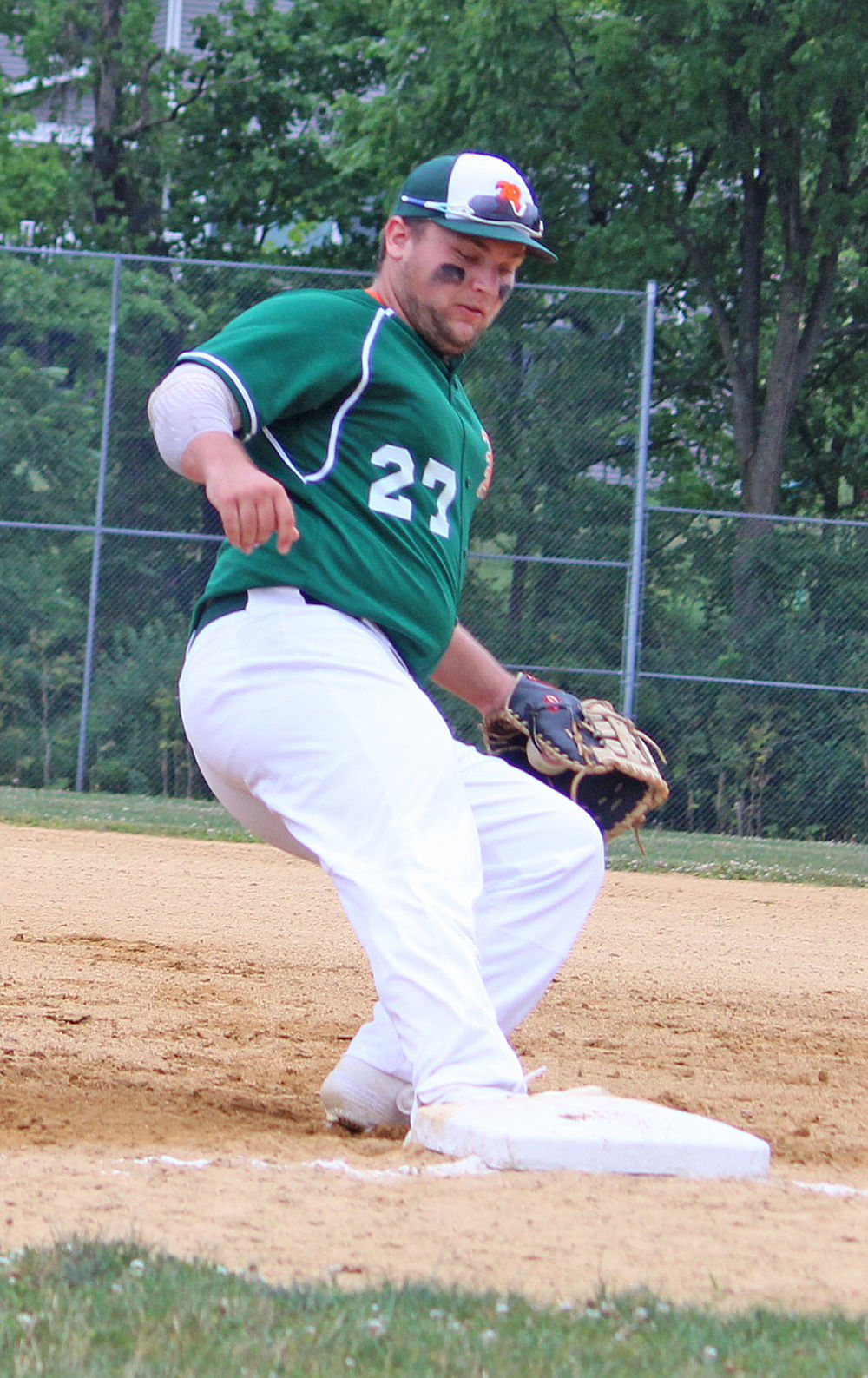 Bedford first baseman Jesse Arnold steps on the base for an out to end the first inning in a win against St. Michael, Tuesday. 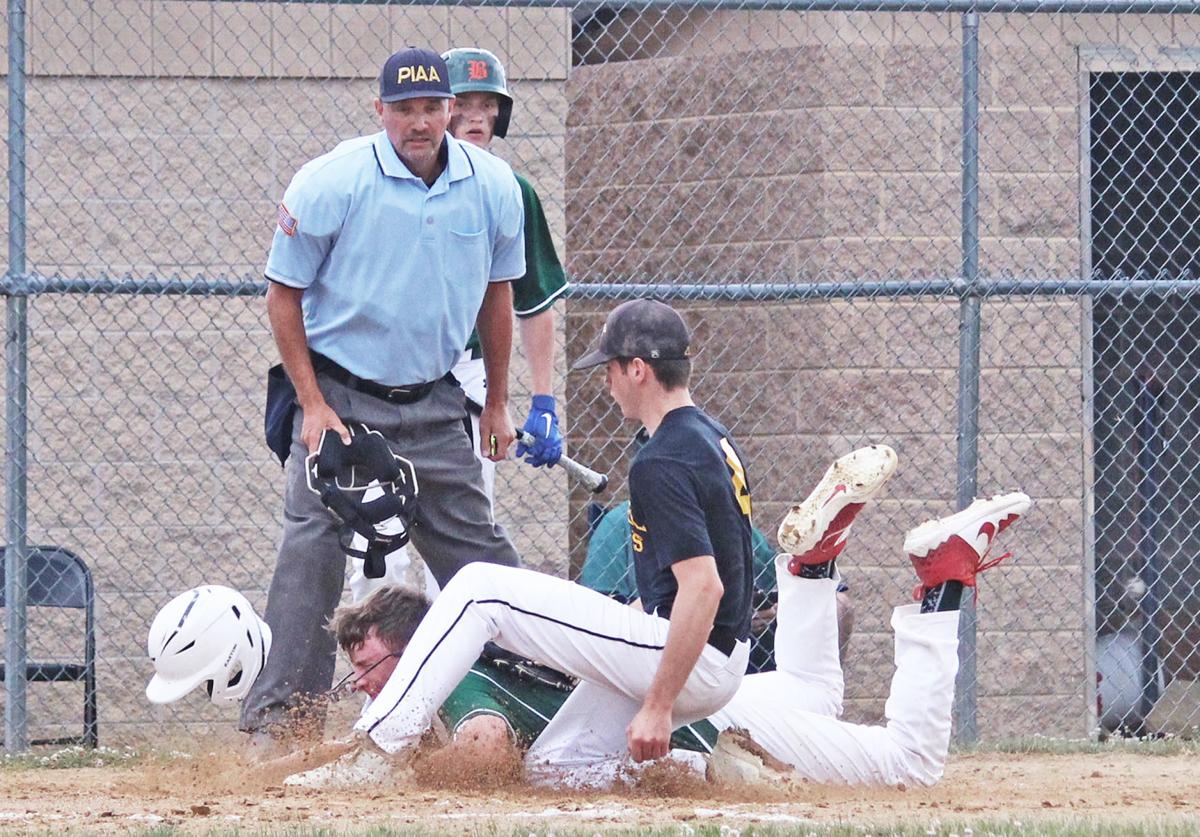 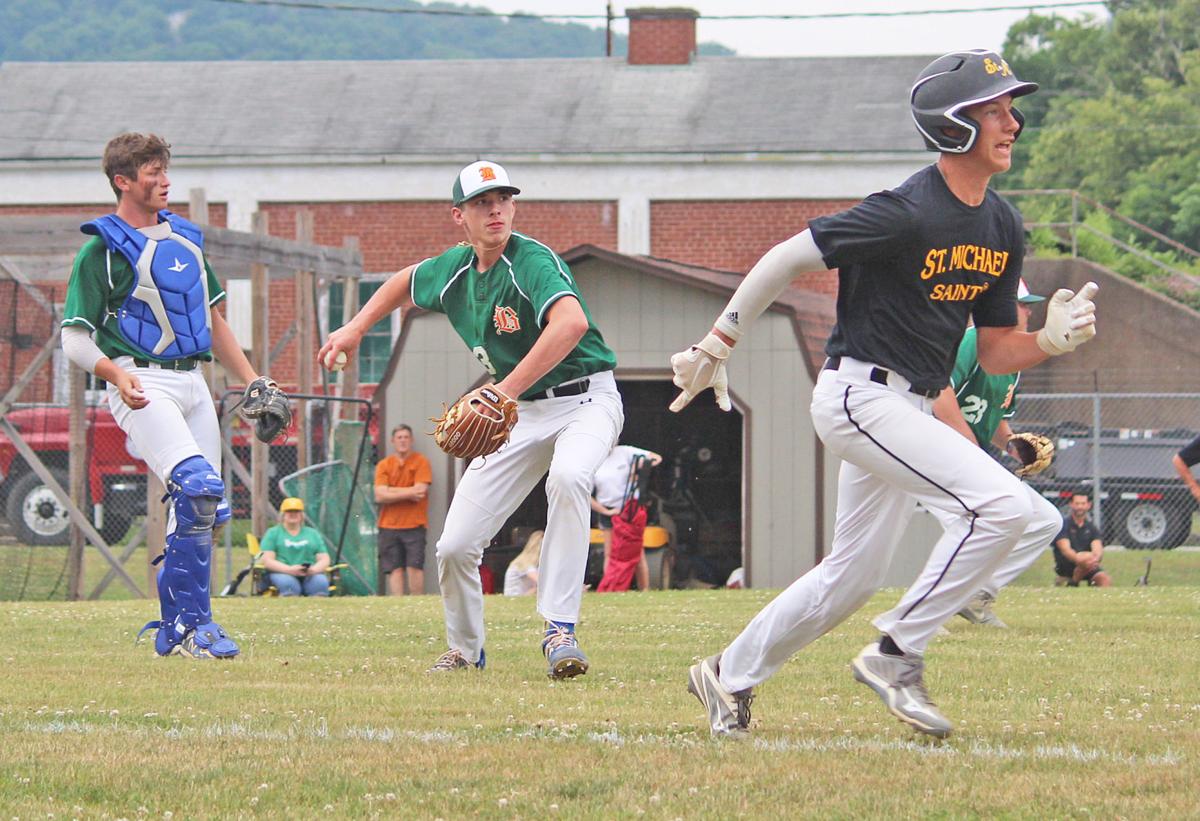 Bedford first baseman Jesse Arnold steps on the base for an out to end the first inning in a win against St. Michael, Tuesday.

Playing a good team twice in a short period of time can be tough, and the Bedford Hurricanes had to meet up with St. Michael on Tuesday after beating the Saints on Sunday, 10-0.

However, the Hurricanes needed only six innings to top the visitors, 14-4.

Bedford got a strong pitching performance from Lucas Nicodemus, who went five innings, allowing four runs on six hits. Rhett Frazier came in to pitch the final inning for Bedford.

Bedford also scored 14 runs on only eight hits, but the Hurricanes took advantage of nine walks, a hit batsman, and four St. Michael errors to push across the runs.

St. Michael struck first in the game. Seth Richardson led off the game with an infield single. He got bunted to second and went to third on a passed ball. Sam Cobaugh hit a bouncer to the pitcher, and as Nicodemus threw the ball to first, Richardson raced home to beat the throw for a 1-0 lead.

That did not last long. Jared Dowey led off the game with a walk, went to second on a wild pitch, and scored when Trenten Mellott’s bouncer was misplayed by a Saint infielder. Mellott got to third on two wild pitches before Cal Iseminger also walked and stole second.

Another pitch got past the catcher allowing Mellott to slide home for a 2-1 lead. After Drew Hall walked, Ashton Dull doubled home Iseminger and Hall scored on a sacrifice fly by Jesse Arnold for a 4-1 lead.

Nicodemus struck out the side in the second inning before the Hurricanes struck for two more runs in the bottom of the second.

Joey Koontz reached on a bad-hop single and got to third on a double by Dowey. After Koontz scored on a wild pitch, Dowey later scored on a sacrifice fly by Iseminger for a 6-2 lead.

St. Michael had an opportunity to get back in the game in the fourth. Myers walks, Cobaugh singled, and Caleb Sorchilla singled to load the bases before Chase Hudson walked to bring home a run. However, Nicodemus got two strikeouts and a ground ball to get out of the inning without any more damage with Bedford leading, 6-2.

Nicodemus finished with eight strikeouts and fanned five batters in a row over the second and third innings.

“Lucas did a great job for us tonight,” said Bedford coach Jordan Mills. “He threw well. He did well to get out of some tough situations like the one in the fourth inning.”

After Arnold singled in Reffner, Iseminger scored on a wild pitch and Nicodemus walked reload the bases. Koontz reached on another St. Michael error that brought home two more runs for a 12-2 lead.

St. Michael needed a run in the top of the fifth to prevent the mercy rule from going into effect, and the Saints got two runs. Richardson singled and stole both second and third. Myers hit a short fly ball to center, and throw home got away from the Bedford catcher, allowing Richardson to score. Cobaugh followed with a triple and Sorchilla singled him home to cut the deficit to 12-4.

The Hurricanes got two more runs in the bottom of the sixth to end the game. Arnold and Nicodemus both walked, and Dowey hit a deep fly ball to right-center field that went off the glove of a diving Saint, bringing in both Arnold and Nicodemus on the triple for the 14-4 win.

“We scored 14 runs on only eight hits, so we took advantage of the situations given to us,” Mills added. “We played well behind the pitcher and had only one error. I was proud of how everyone stepped up with some of our players not here.”

In a slight change to the schedule, Bedford will host McConnellsburg in a single game on Saturday at noon. There was supposed to be a second game with Dry Run, but that has been postponed for now.