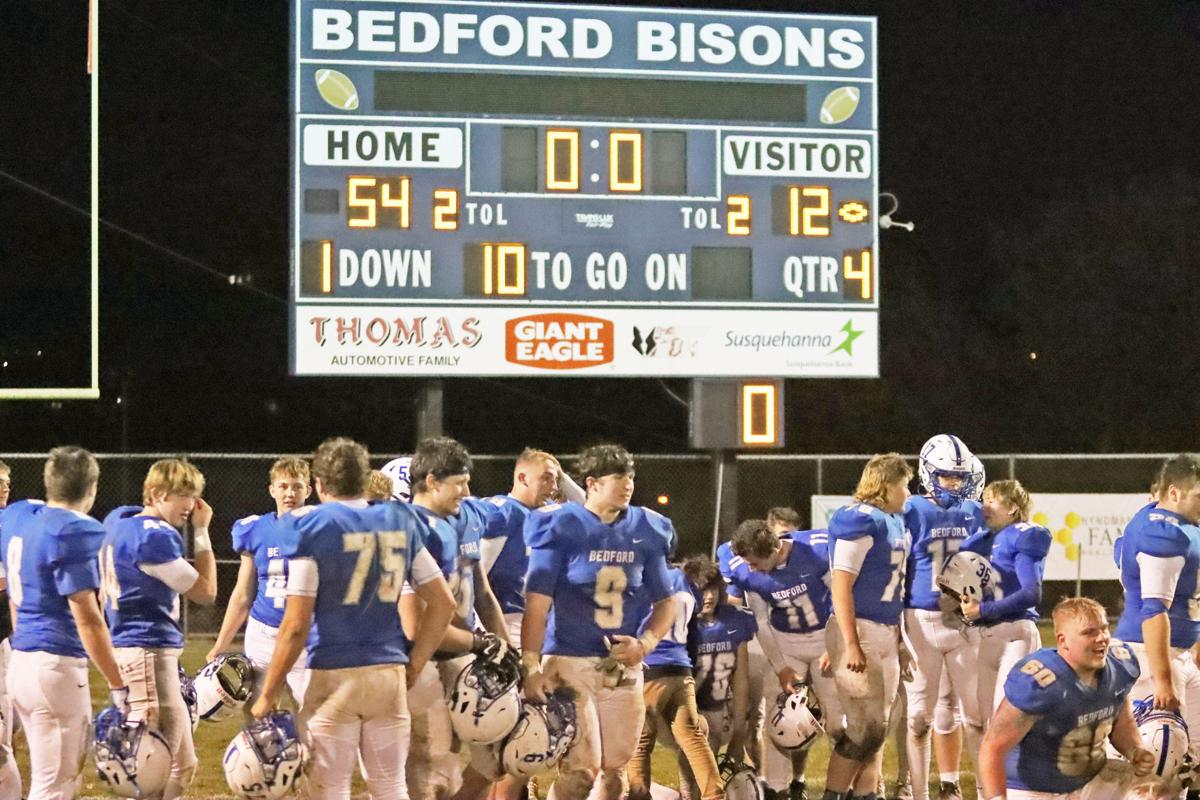 Bedford celebrates its victory over Clearfield in front of the scoreboard in the District 5/9-AAA Subregional Championship, Friday night. 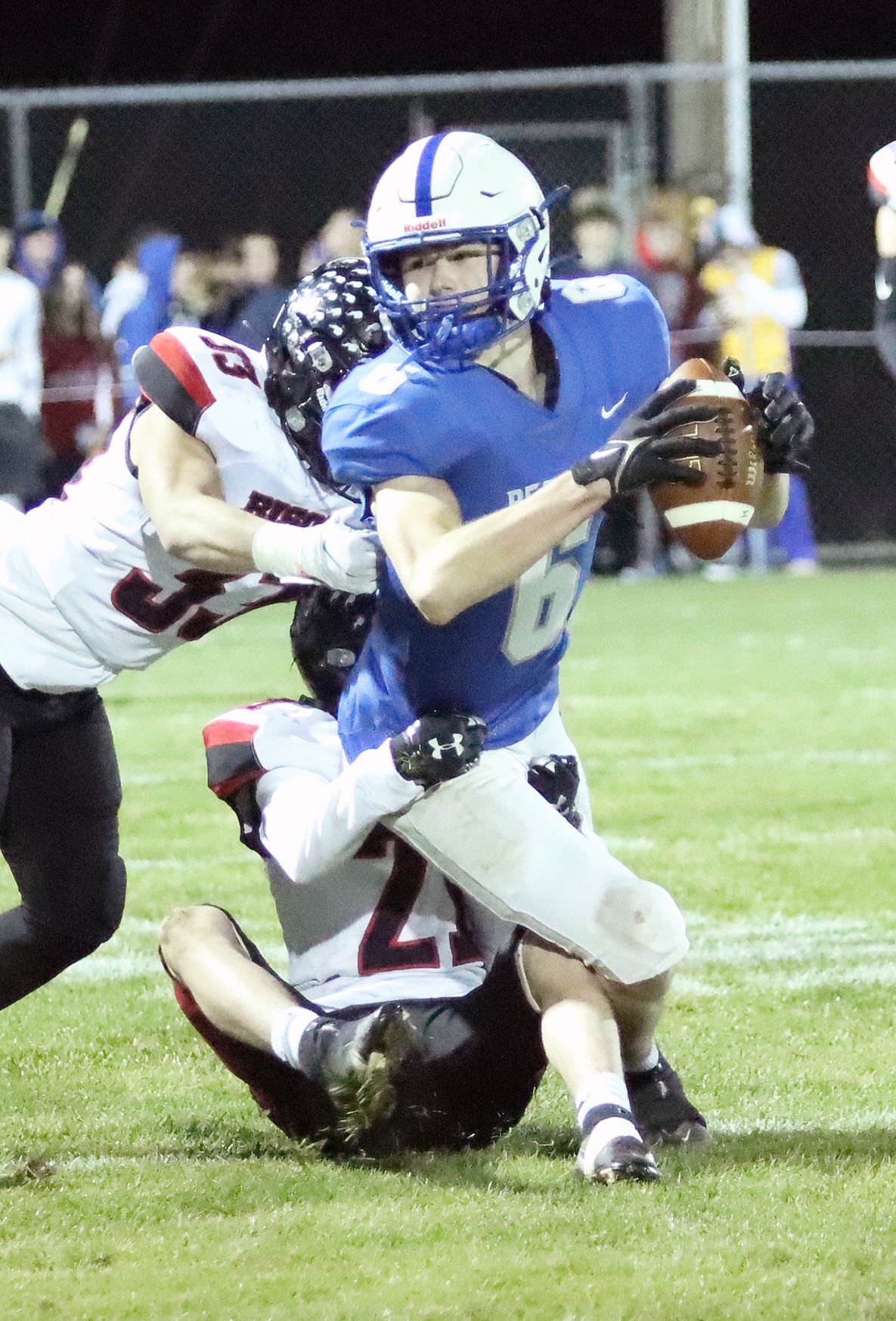 Bedford’s Kevin Ressler, 6, stretches forward to pick up a first down as Clearfield’s Jose Alban, 33, and Brady Collins, 21, try to tackle him, Friday night. 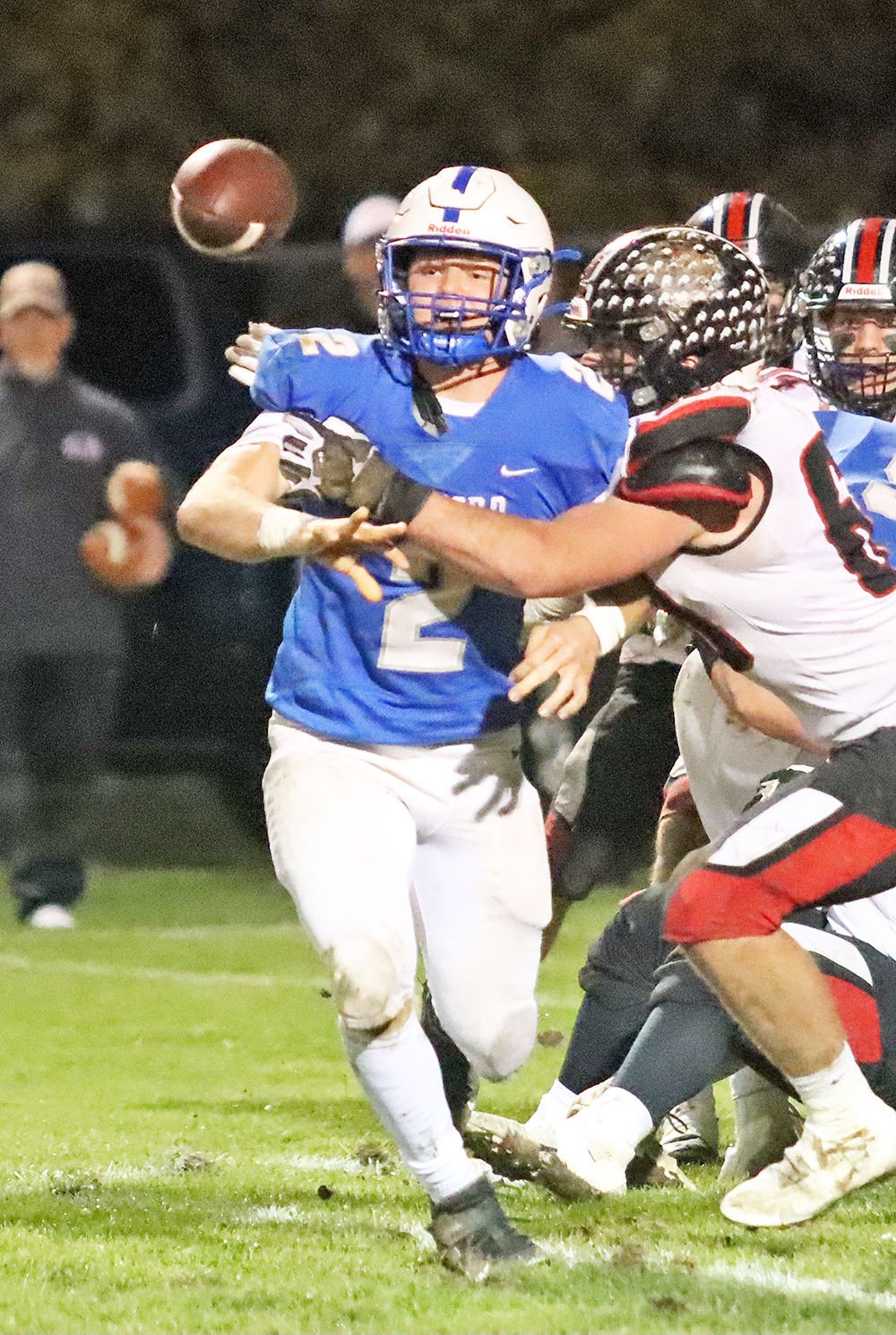 Bedford’s Mercury Swaim pitches the ball to teammate Ethan Weber for a first-quarter touchdown against Clearfield in the District 5/9-AAA Subregional Championship, Friday. 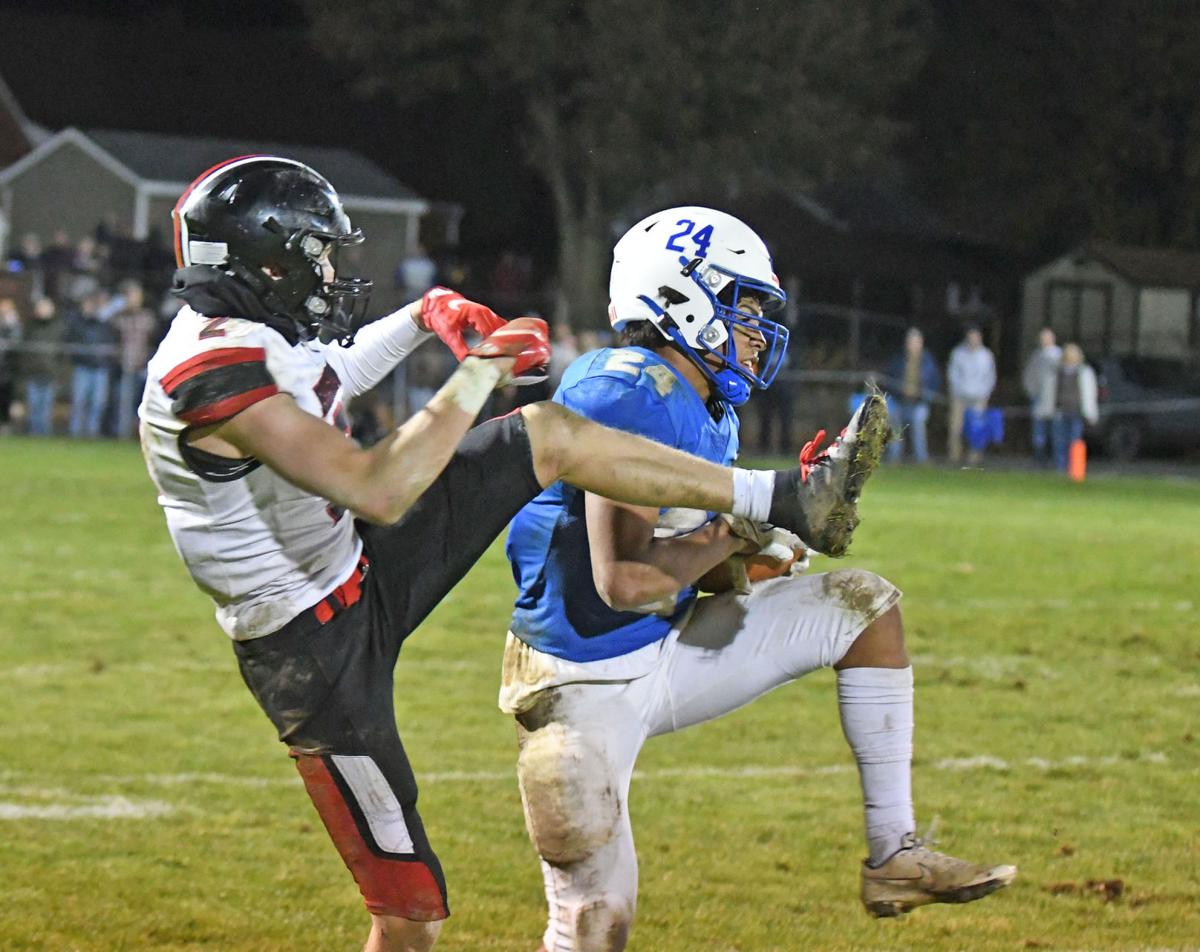 Bedford’s Max Washington, 24, intercepts a pass in front of Clearfield’s Karsen Kline, 2, in the fourth quarter, Friday. Washington returned the interception for a touchdown in the 54-12 win. 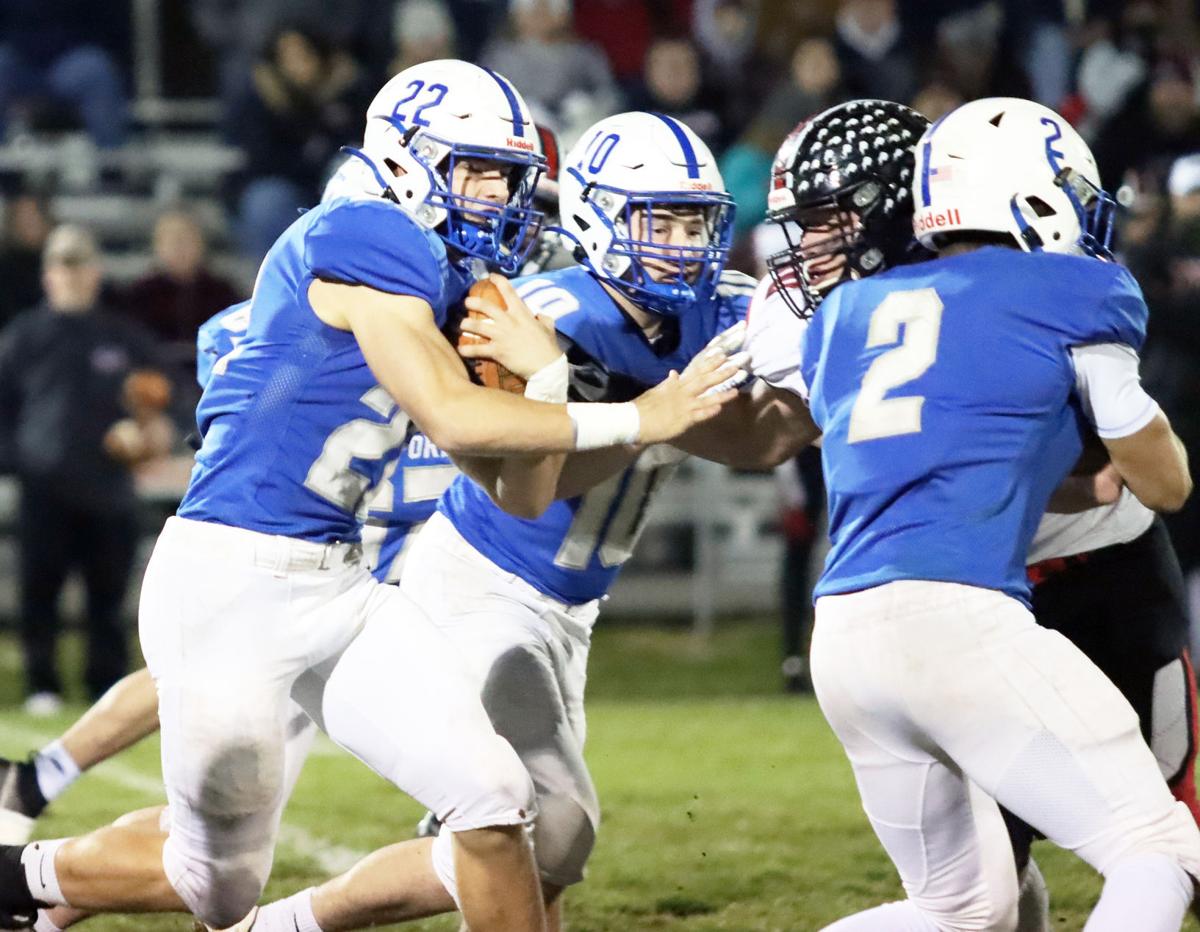 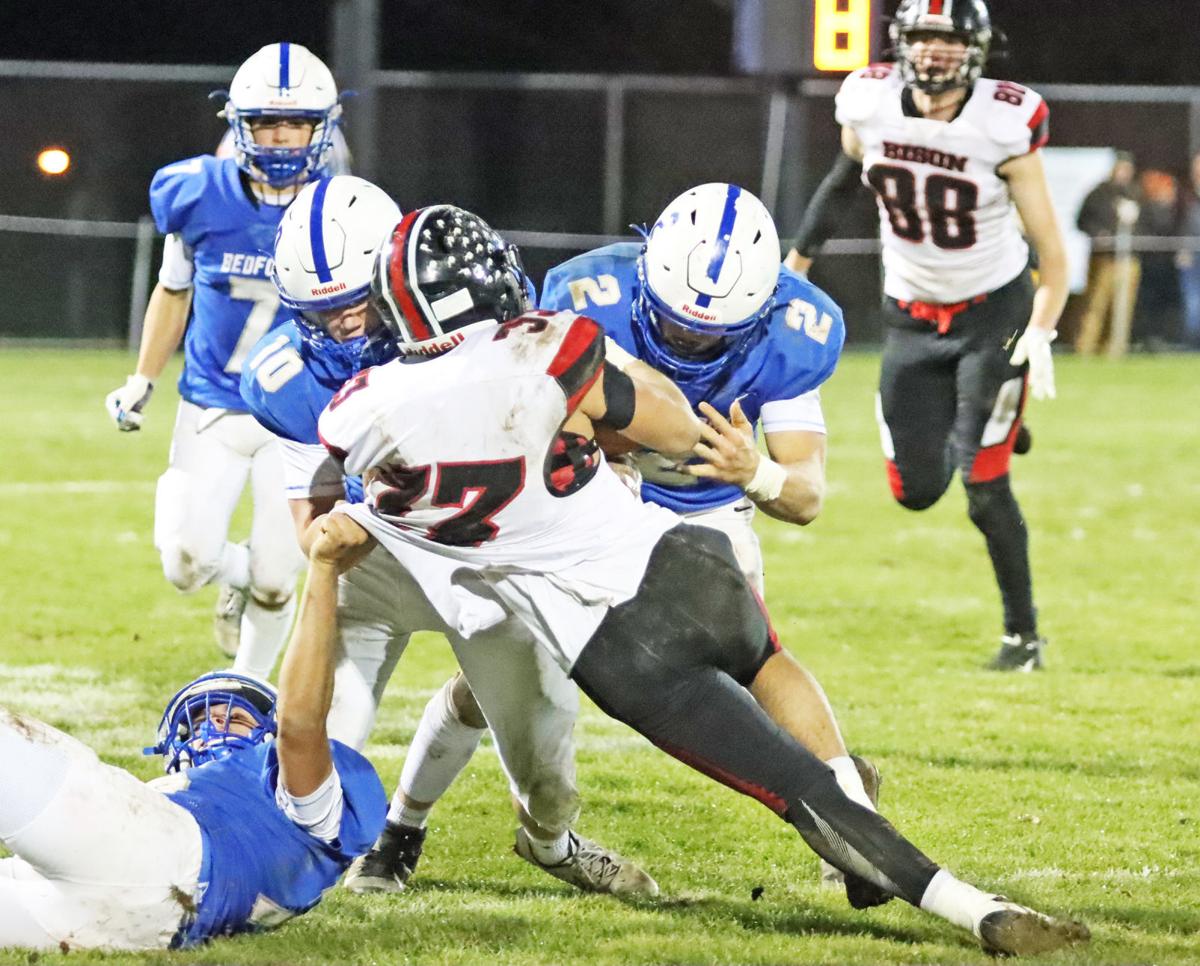 Clearfield’s Jose Alban, 33, is tackled by Bedford’s Mercury Swaim, 2; J.J. Arnold, 10; and an undetermined Bison defender on the ground, Friday. 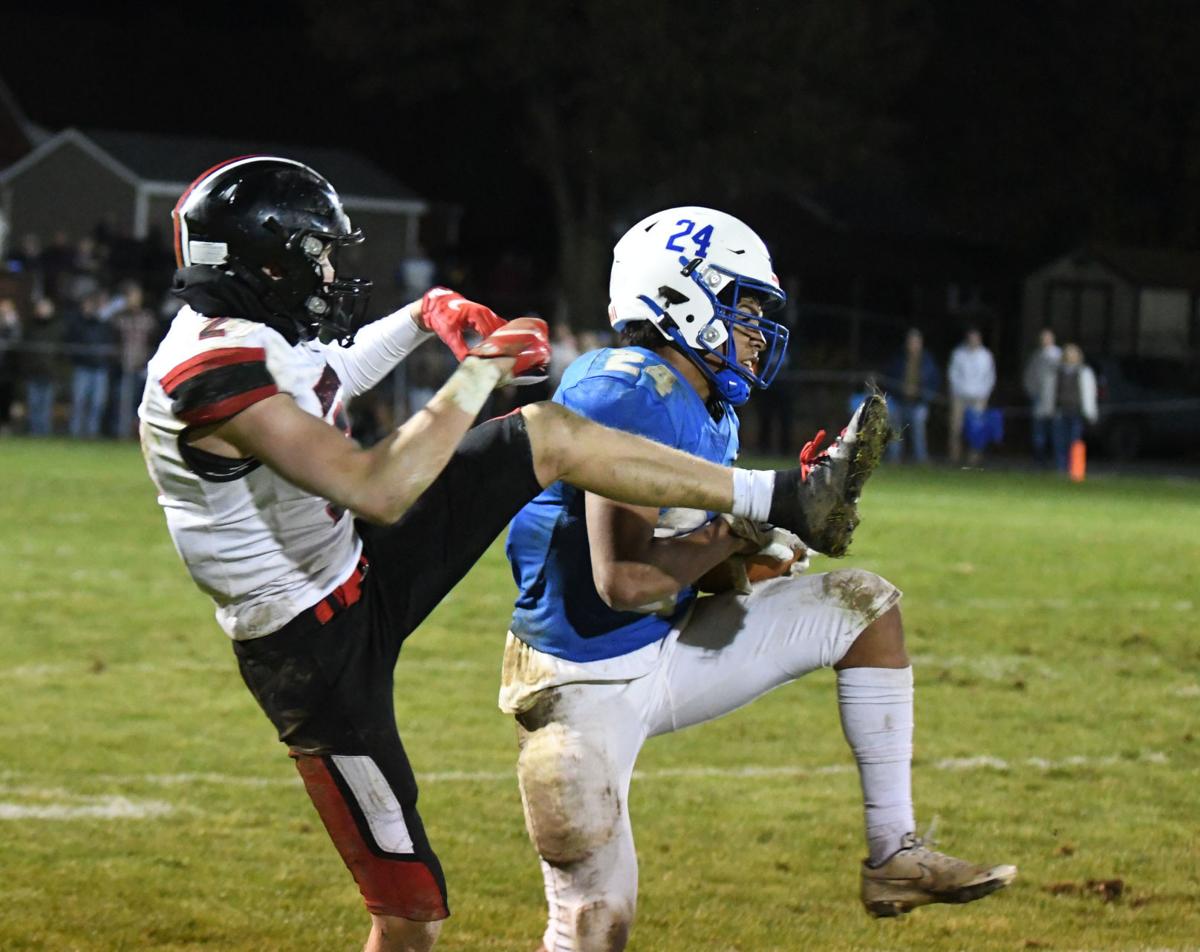 Bedford celebrates its victory over Clearfield in front of the scoreboard in the District 5/9-AAA Subregional Championship, Friday night.

Bedford’s Kevin Ressler, 6, stretches forward to pick up a first down as Clearfield’s Jose Alban, 33, and Brady Collins, 21, try to tackle him, Friday night.

Bedford’s Mercury Swaim pitches the ball to teammate Ethan Weber for a first-quarter touchdown against Clearfield in the District 5/9-AAA Subregional Championship, Friday.

Bedford’s Max Washington, 24, intercepts a pass in front of Clearfield’s Karsen Kline, 2, in the fourth quarter, Friday. Washington returned the interception for a touchdown in the 54-12 win.

Clearfield’s Jose Alban, 33, is tackled by Bedford’s Mercury Swaim, 2; J.J. Arnold, 10; and an undetermined Bison defender on the ground, Friday.

This year’s senior class for Bedford have been part of a winning tradition since their freshman year.

On Friday, Bedford hosted Clearfield for the District 5/9-AAA Subregional final as the locals looked for their fourth consecutive title in as many years.

The two teams opened the game with two quick scores, but the hosts set the tone as they ran away with a 54-12 victory.

“This makes it four in a row,” explained Bedford coach Kevin Steele. “These seniors have won it every year. I’m proud of them. They’re great kids, and they work super hard.

Much of Bedford’s success was in large part of Max Washington. The junior running back scored four times for the locals on a pair of carries, a reception, and an interception return.

“He just keeps learning, growing, gaining more confidence, and getting better and better,” Steele noted on Washington. “He had a nice night on both sides of the ball. We had him following their best receiver, and he shut him down.

“All of our kids made great plays tonight. I’m super proud of their efforts. They’re great kids, and they work so hard. I’m just lucky to be their coach.”

The game opened with the hosts receiving the opening kickoff. Mercury Swaim had a rush of 21 yards for a first down and he later passed the ball to Ethan Weber for 11 yards, putting the hosts six yards out from points.

Washington got the ensuing handoff and trotted the ball in for the six-yard touchdown. Lizzy Martz added the PAT and the locals led 7-0 with 9:30 left in the first period.

Clearfield responded on the ensuing kickoff as Karsen Kline scored on an 83-yard kickoff return with 9:18 left in the first quarter. The kick was no good and the visitors trailed, 7-6.

Heading into the subregional final, Clearfield allowed just 47 points during 10 regular season games and they allowed 27 points in the playoffs prior to the 54-12 loss.

Clearfield turned the ball over on downs halfway through the second quarter as Bedford took over at its own 40. Trent Price had a run of seven yards before Swaim pitched the ball back to Washington, who ran down the field for a 57-yard touchdown, pushing Bedford to a 27-6 lead.

Clearfield added its final points of the game on the following drive.

The visitors had three first downs, converting on a trio of third downs. Carter Chamberlain scored on a four-yard touchdown as the locals held a 27-12 lead at the half.

Following a scoreless third quarter, the locals exploded in the fourth quarter with a 27-0 run.

Bedford started a scoring drive late in the third quarter, slowly moving the ball down the field. Facing a third and nine, Swaim found Kevin Ressler for a 10-yard pass and a Bedford first down. Swaim was tackled on a rush of eight yards, while Clearfield was called for a facemask penalty on the play — helping the locals to another first down.

Facing another third and long, Swaim found Price for an 11-yard pass for a first down. Price added a pair of carries for nine yards, but the hosts were called for an illegal procedure to move the ball back five yards. Price earned another first down on a carry of 13 yards before a short pass and another Bedford penalty, this time for holding.

Washington got the hosts into Clearfield territory with a short carry and he added a 29-yard reception from Swaim to put the hosts 27 yards out from points. Price added a short run after an incomplete pass as the locals sat at the Clearfield 24 on a third and seven as the third period ended.

The hosts faced a fourth and seven after an incomplete pass, but Washington caught a nine-yard pass from Swaim for a Bedford first down. Price added a short run to put Bedford 13 yards shy of points. Swaim called his own number and hit paydirt for a 13-yard touchdown with 10:44 left in the game.

The Bedford defense also shined in the 54-12 victory, having two interceptions in the fourth quarter. Washington nabbed the first one and ran the ball back for a 68-yard interception return. Martz added the PAT and the locals led, 40-12, with 8:43 remaining in the game.

Clearfield went four and out on its next drive and Bedford lined up at its own 22 after a 43-yard punt.

Swaim passed the ball down the field to Washington as the locals added another touchdown — this time on a 78-yard pass with 7:17 left.

Weber added the second interception for Bedford. Much like Washington’s pick six, Weber’s interception resulted in points as the senior ran the ball in from 26 yards. Martz’s PAT solidified Bedford’s 54-12 victory.

Washington led all receivers with 116 yards. He sat second on the team in rushing with 71 yards. Swaim led the locals with 77 yards.

Bedford improves to 10-1 and the subregional champs will advance to next week’s PIAA Class AAA opener against District 6 champion Central. The two faced one another earlier this season with the Dragons handing the locals their only loss of the year, 41-27. The Dragons toppled Penn Cambria in the District 6-AAA final, 42-7.