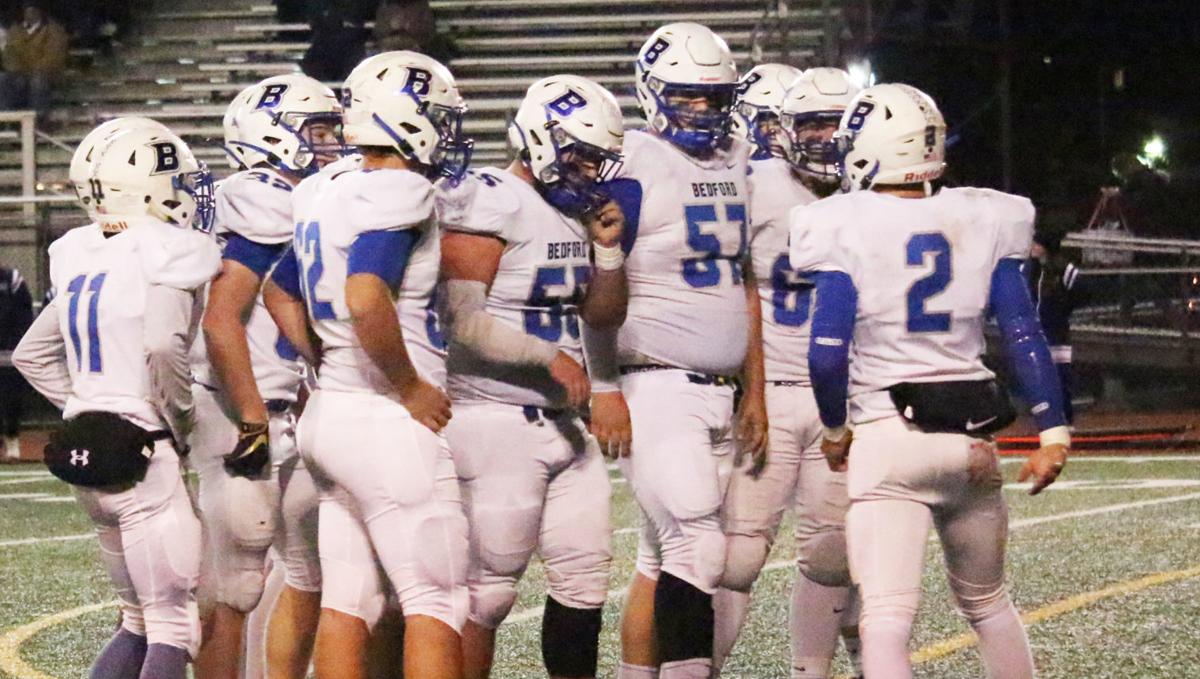 Bedford quarterback Mercury Swaim, 2, gives the play to the huddle during the first half against Bald Eagle Area, Friday. 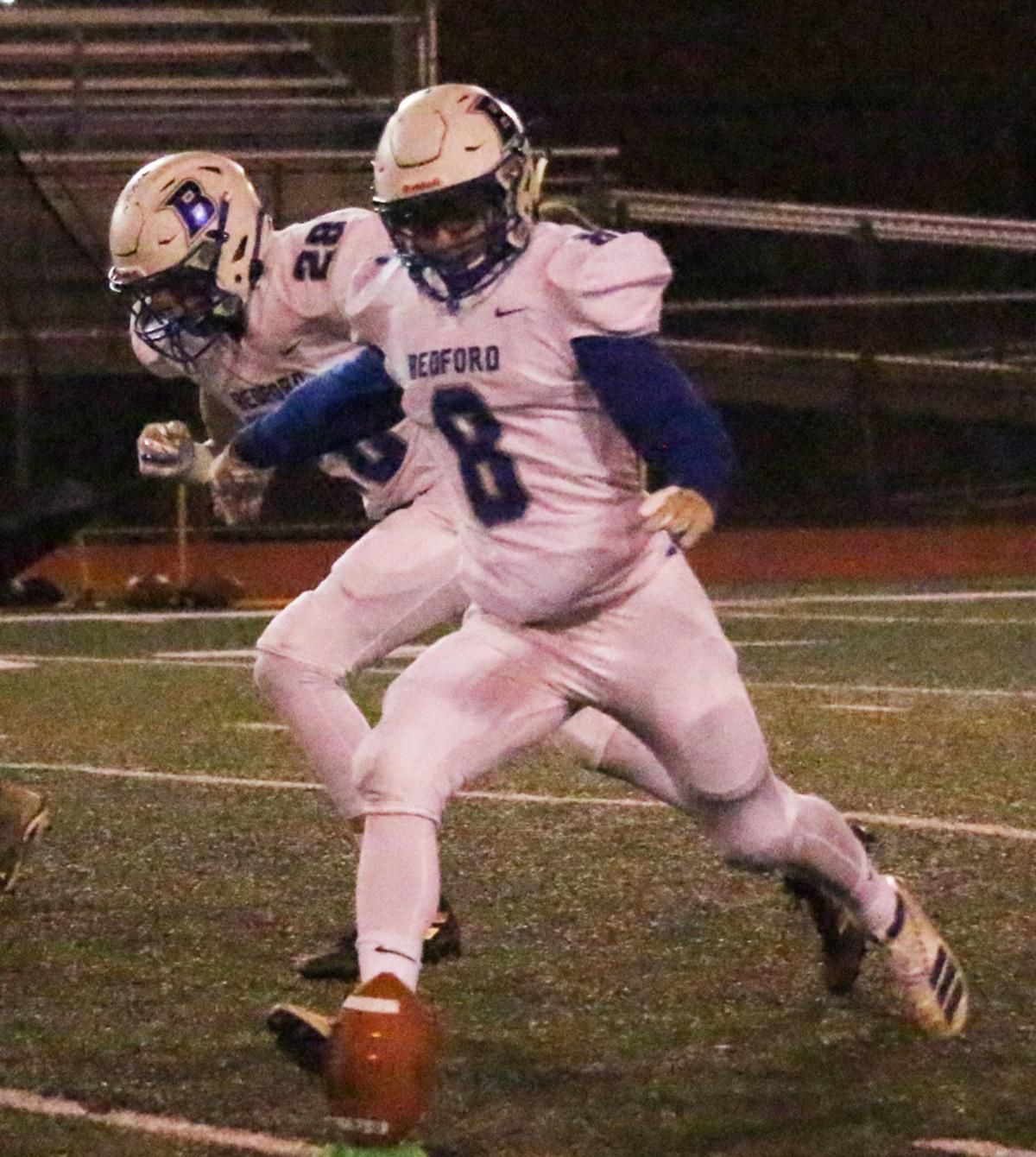 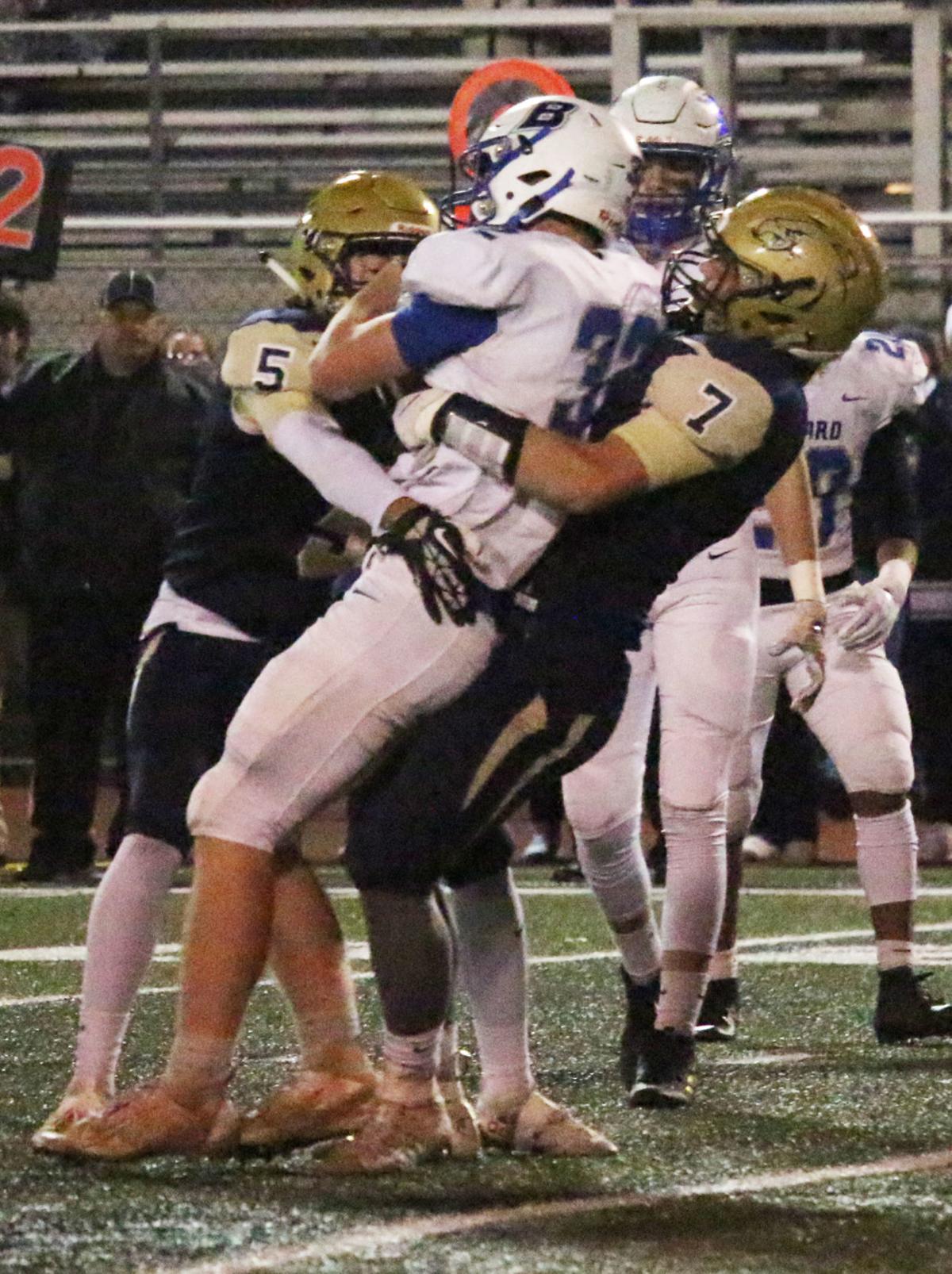 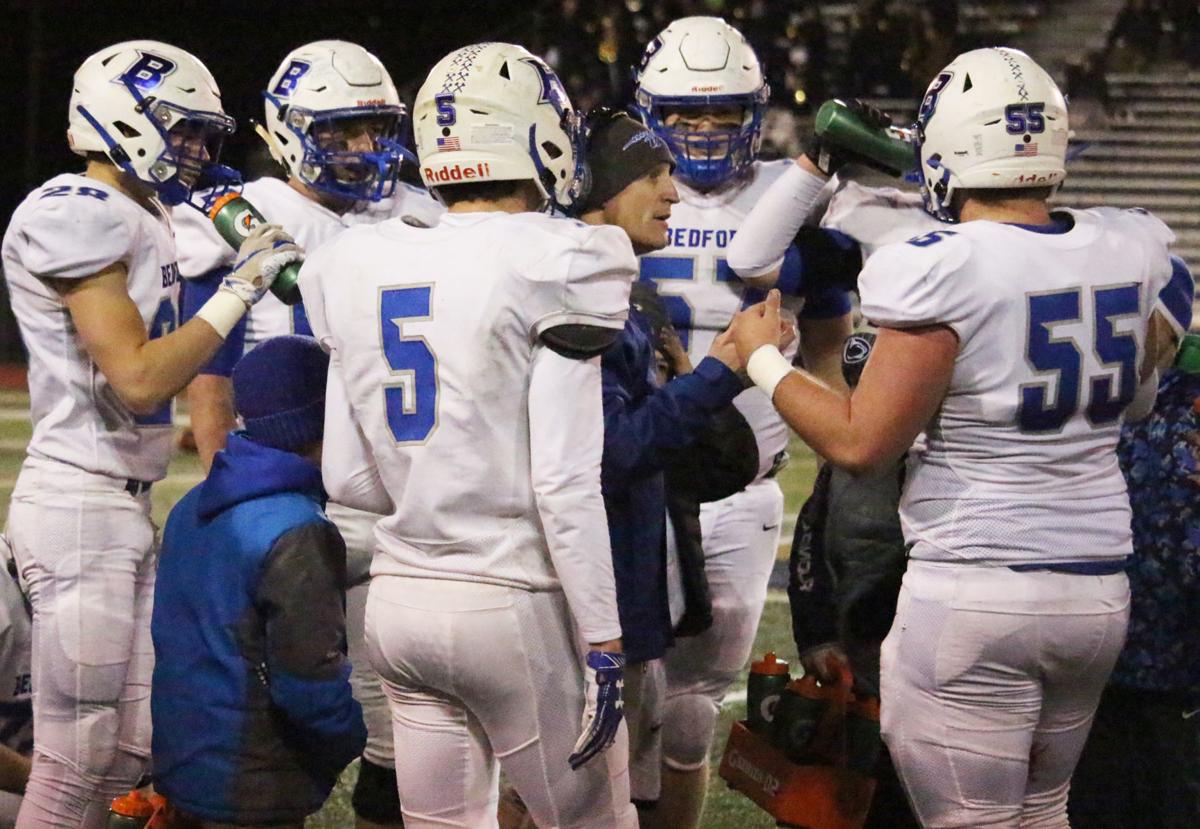 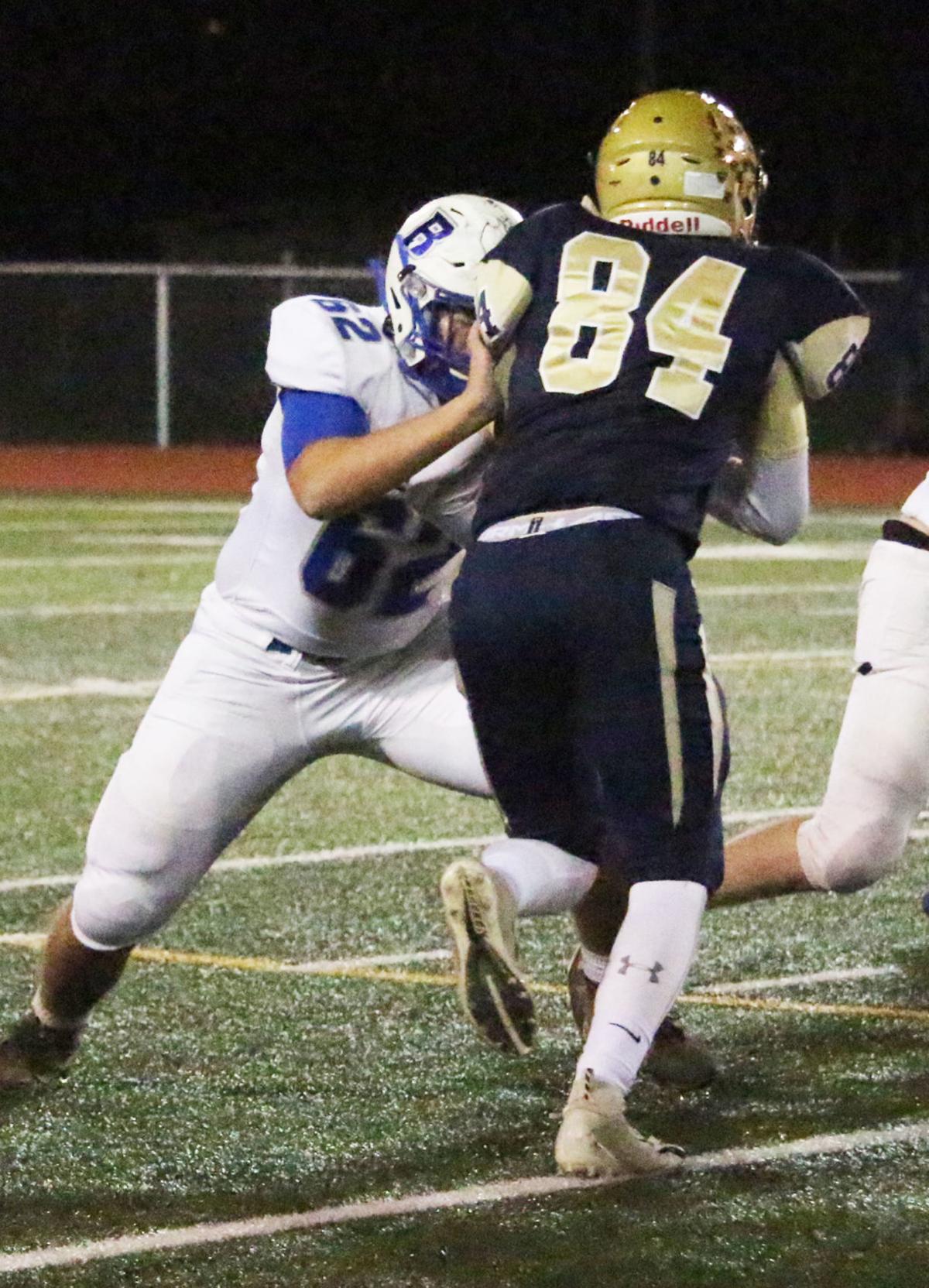 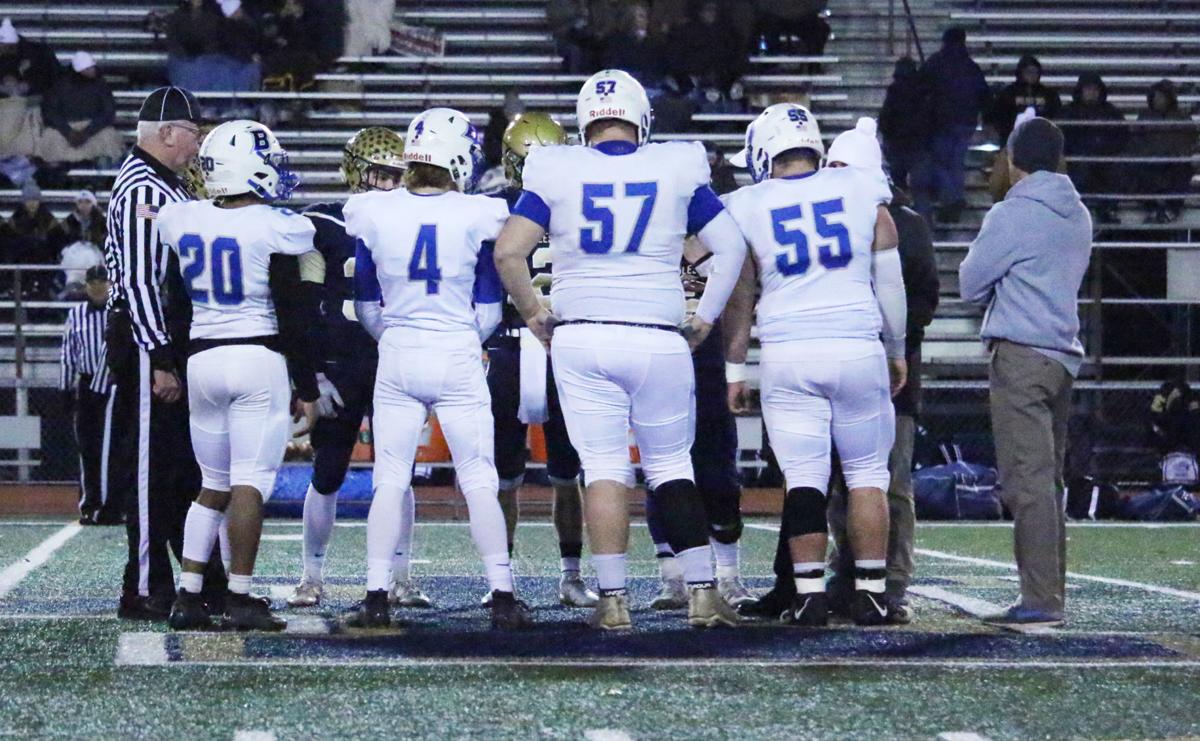 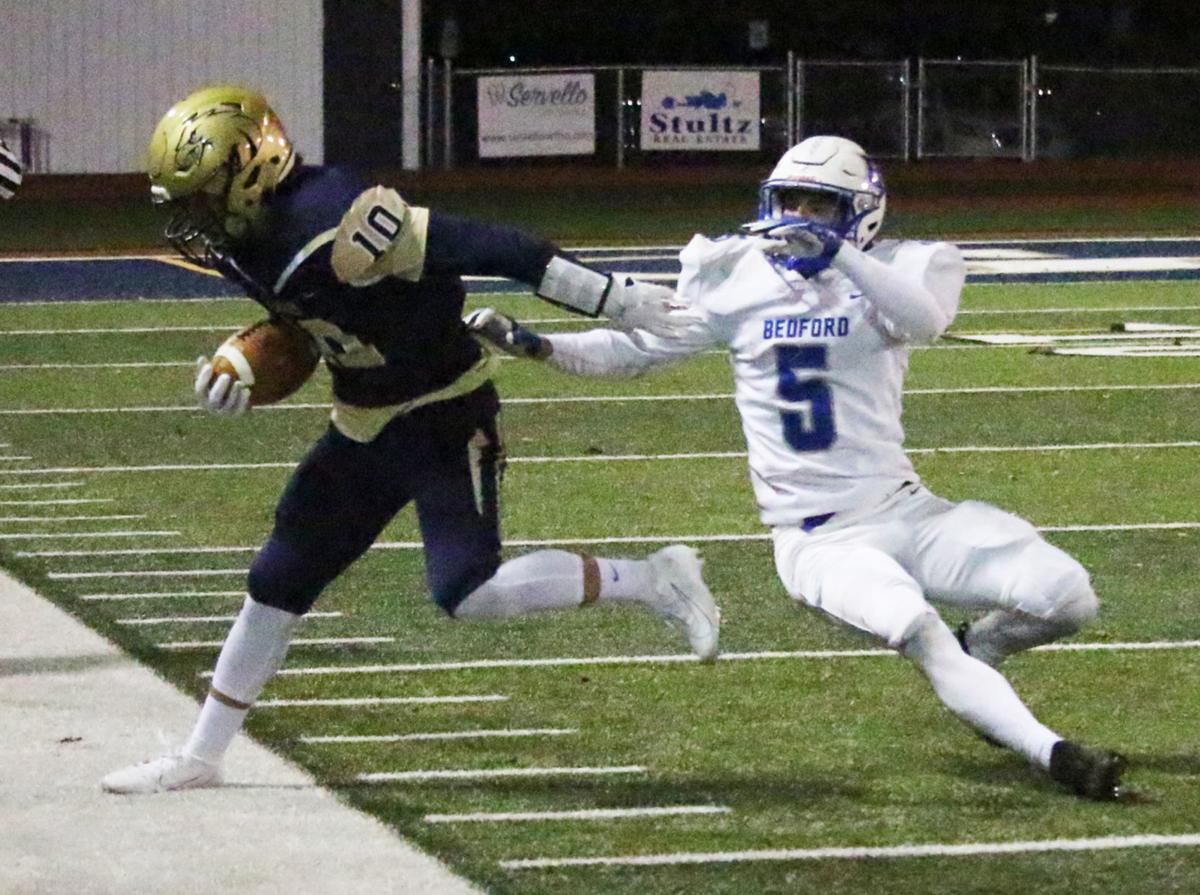 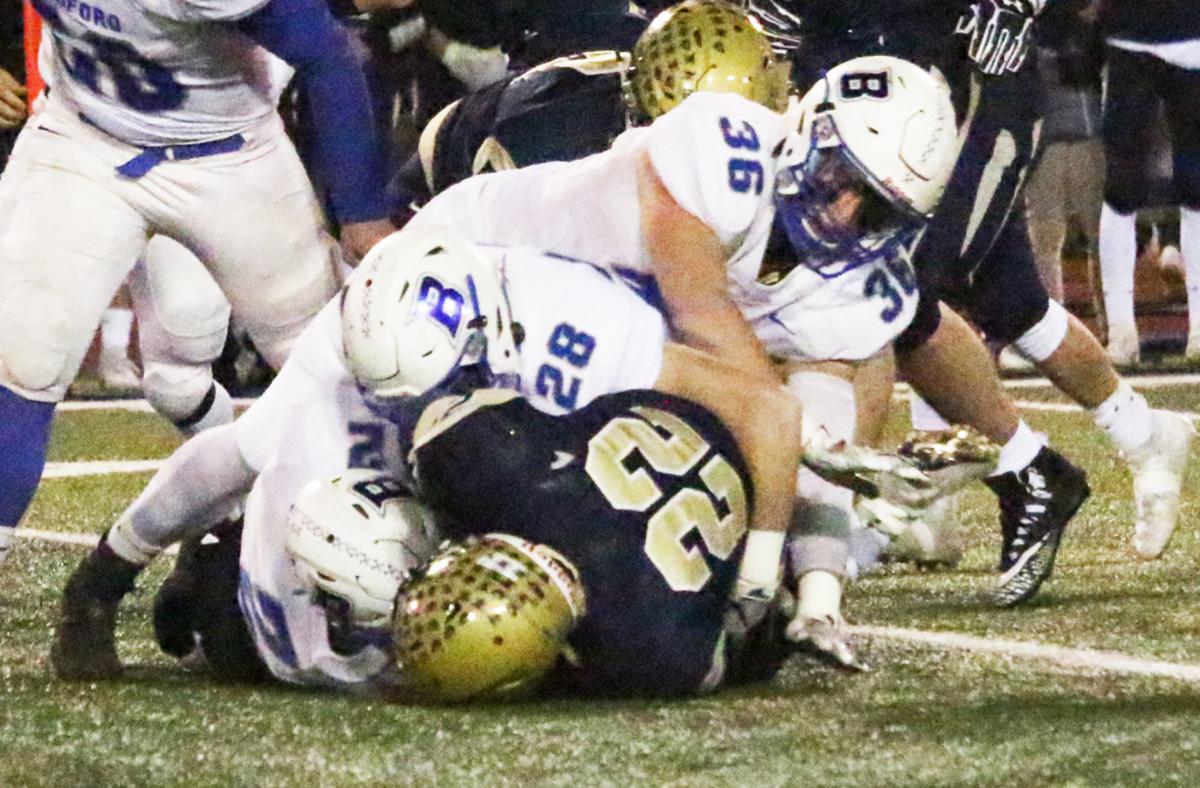 Bedford quarterback Mercury Swaim, 2, gives the play to the huddle during the first half against Bald Eagle Area, Friday.

HOLLIDAYSBURG – Friday night’s PIAA Class AAA first round game came down to which team made the fewer mistakes.

The Eagles rallied from a 14-0 deficit to top Bedford in overtime.

The Bisons three fumbles and gave up two interceptions, with both Bald Eagle’s touchdowns scored in regulation coming off of those turnovers.

“Our kids always play hard and we never faulted our kids’ efforts,” said Bedford coach Kevin Steele. “We just didn’t play particularly well offensively, taking care of the football. You can’t turn the ball over (five) times against a good team like that and expect to win.

“We needed to be better offensively in the second half, and we weren’t. Those turnovers and mistakes eventually did us in.”

The Eagles scored in the second half after trailing, 14-0, at the half. After tying the game with 1:06 remaining in regulation, the Eagles had the opening possession as the overtime period began.

BEA’s Gage McClenahan had a rush for no gain before Jaden Jones hit McClenahan in the end zone on the following play for a touchdown. Carter Stere’s PAT was good, and the Eagles took a 21-14 lead.

Bedford’s Mercury Swaim responded with a 10-yard touchdown run on the next play, but the PAT hooked left of the up rights as the BEA sideline rushed onto the field to celebrate the win.

“Our kids battled. They played hard,” Steele added. “(Bald Eagle) is a good offensive football team, and we held them to 14 points. We needed to do a better job on the offensive side of the ball in the second half, and we’re not standing here having this conversation we are now.”

Bedford opened the game with a very strong first quarter push but the momentum tapered off after the opening 12 minutes.

The Bisons recorded seven of their 13 first downs in the opening period.

Following a 33-yard BEA punt to begin the game, Bedford fumbled the ball on its third play of the drive. BEA had to punt once again ,and the Bisons lined up on their own six-yard line with 6:32 left to play in the opening quarter.

Swaim picked up a first down on a 12-yard scamper before the line was hit with a false start penalty. Steven Ressler shook off the penalty and took off down the field to pick up 17 yards for the Bisons. Swaim added another run, this time for 13 yards, after a small gain by Elijah Cook.

Cook, Ressler, and Miles Washington each had a carry as the Bisons erased 21 yards, but a holding called moved back what could have been an eight-yard run by Washington back to a six-yard run.

Two plays later, the Bisons were at the BEA 1, but another false start call against the locals pushed the ball back five yards.

Washington took the quick pitch and trotted the ball in for a six-yard touchdown with 30 seconds left in the first quarter. Lizzy Martz hit the PAT and the Bisons led, 7-0.

Ressler recorded an interception on the Eagles’ first play of their next drive, but the Bisons struggled to find yardage and had to punt the ball.

The Eagles added two first downs on the ensuing drive but struggled late and turned the ball over on downs. Ressler took the following handoff from Swaim and shuffled through traffic to score a 59-yard touchdown run with 9:04 left in the first half. Martz added the PAT and the Bisons held a 14-0 lead.

The Eagles tried to score late in the first half, facing a fourth and goal after a nine-yard pass between Kaden Bittinger and Jones. It was ruled on the field that a second remained with BEA coach Jesse Nagle calling for a timeout. The Bisons were called for an encroachment penalty following a pair of timeouts between to the two clubs, but Jones had an incomplete pass to end the opening half.

The Eagles picked off a Swaim pass to begin the second half but struggled to move the ball. The Bisons fumbled the ball just five plays into their next drive and the Eagles recovered.

McClenahan had four carries during the Eagles’ six-play scoring drive, hitting paydirt on a six-yard trot with 3:40 left in the third quarter. Stere added the PAT and Bald Eagle cut Bedford’s lead in half, 14-7.

McClenahan pounced on the loose ball at the Bedford 16 with a little under four minutes left to play. He was the primary workhorse on the short drive, having five rushes for 11 yards. Jones found Reese in the end zone for a five-yard touchdown pass on fourth down with 1:06 left in regulation. After Stere’s PAT the Eagles tied the game as regulation ended.

“We have a great group of kids and they battle,” Steele explained. “I’m proud of them: the way they work hard, the way they practice, and the way they handle themselves on and off the field. They were just one play short tonight.”

“Those kids did a great job. You always feel bad for the seniors on the last game,” Steele noted on the seniors. “They had a great season. They played hard. They represent our program in the way that makes the head coach proud. We’ll certainly miss them and their contributions to the program.”