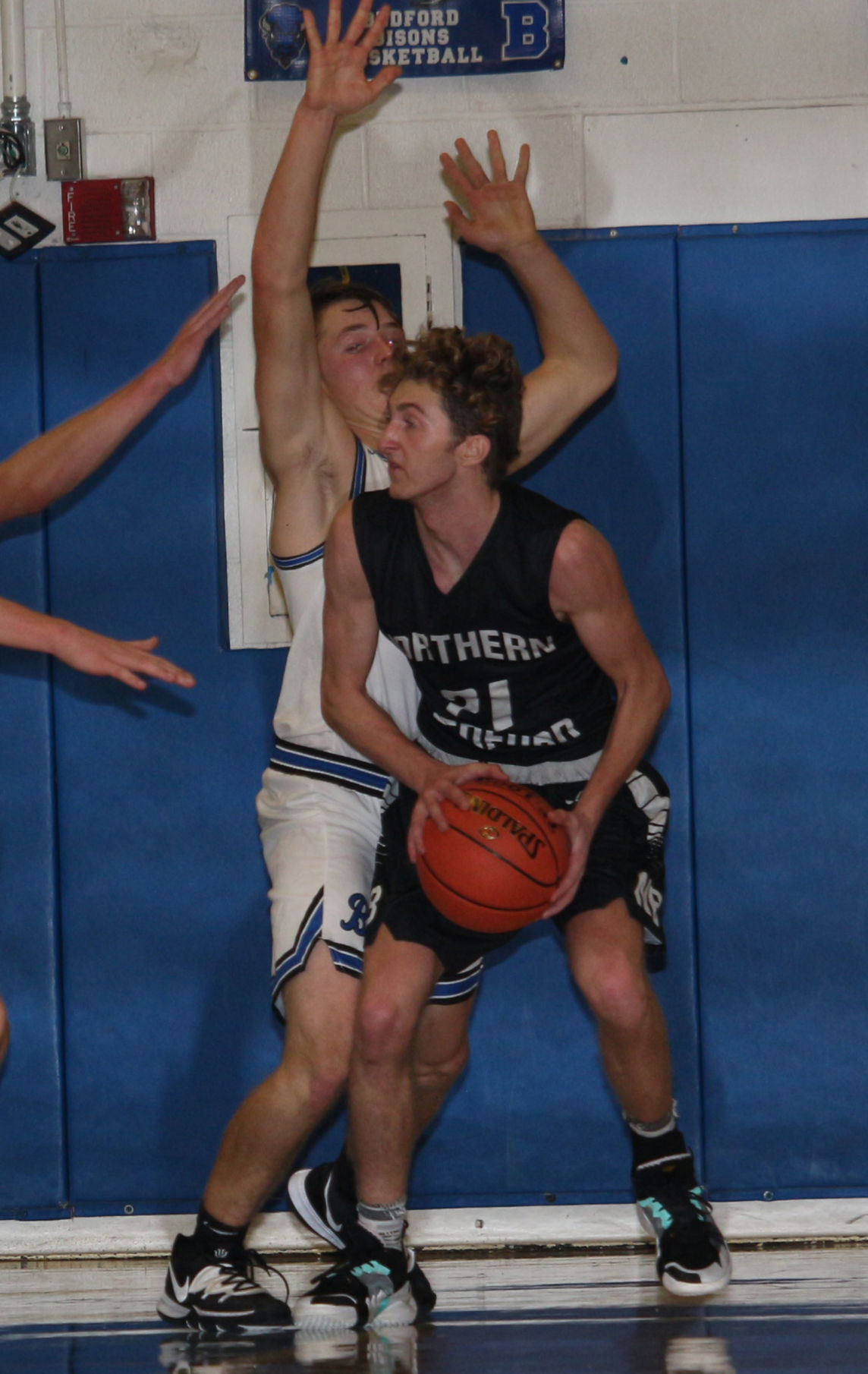 Northern Bedford’s Caleb Diehl looks to pass the ball during the second half against Bedford, Friday. Guarding Diehl is Bedford’s Mercury Swaim. 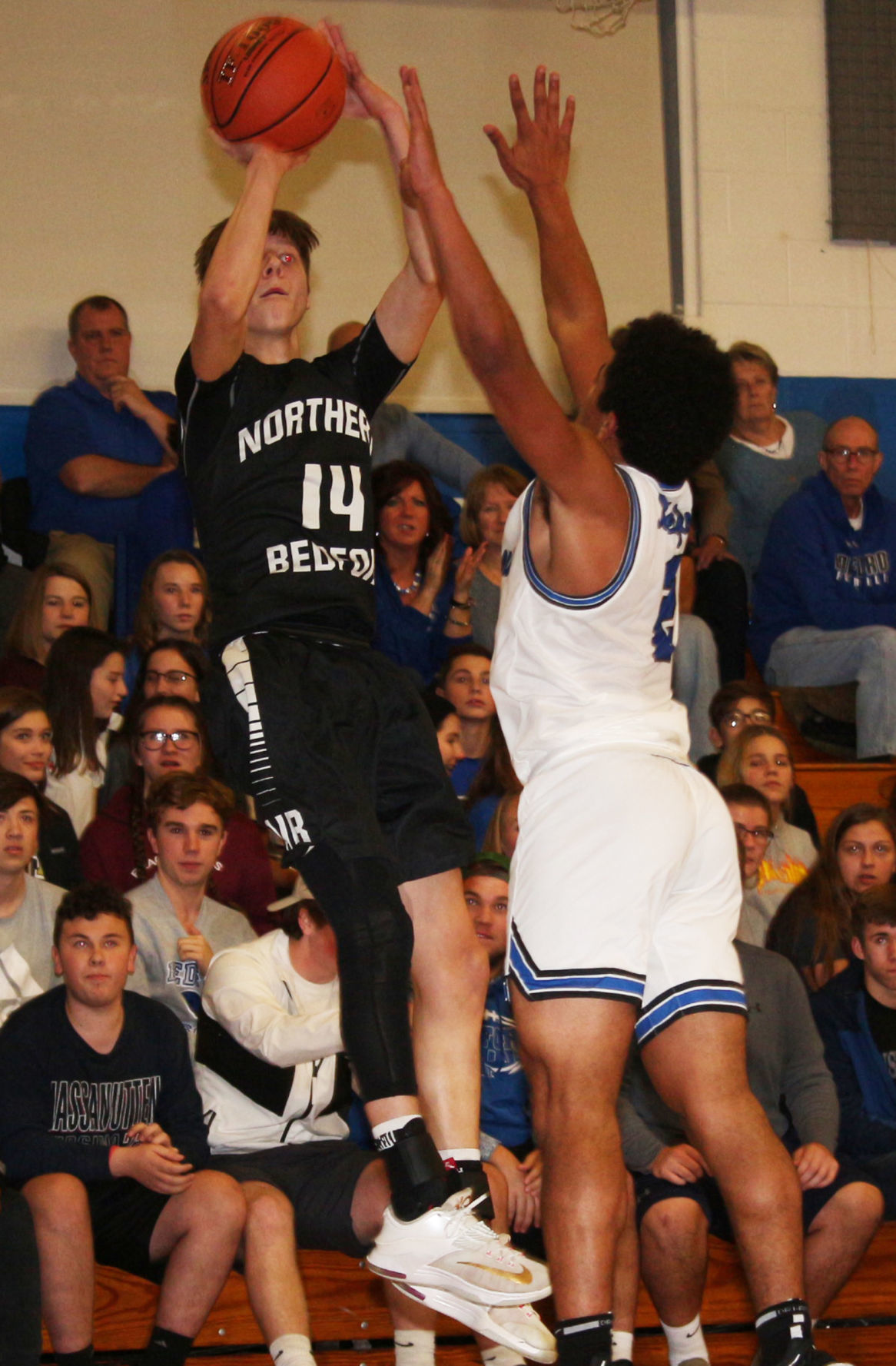 Northern Bedford’s Hayden Foor, 14, gets a shot off despite Bedford’s Miles Washington’s defensive pressure during the first half, Friday. 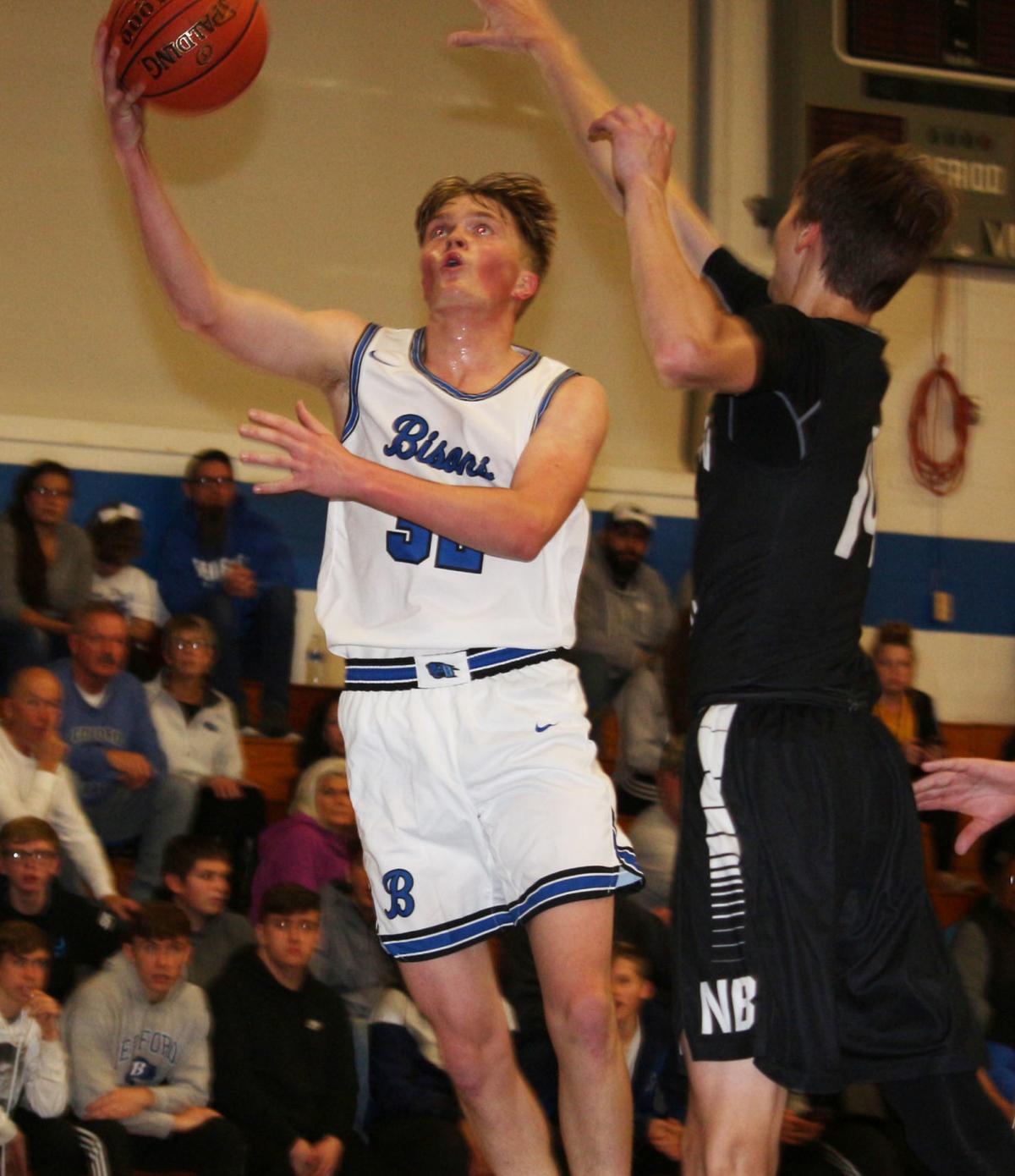 Bedford’s Drew Hall goes up for a lay-up during the third quarter against Northern Bedford, Friday. 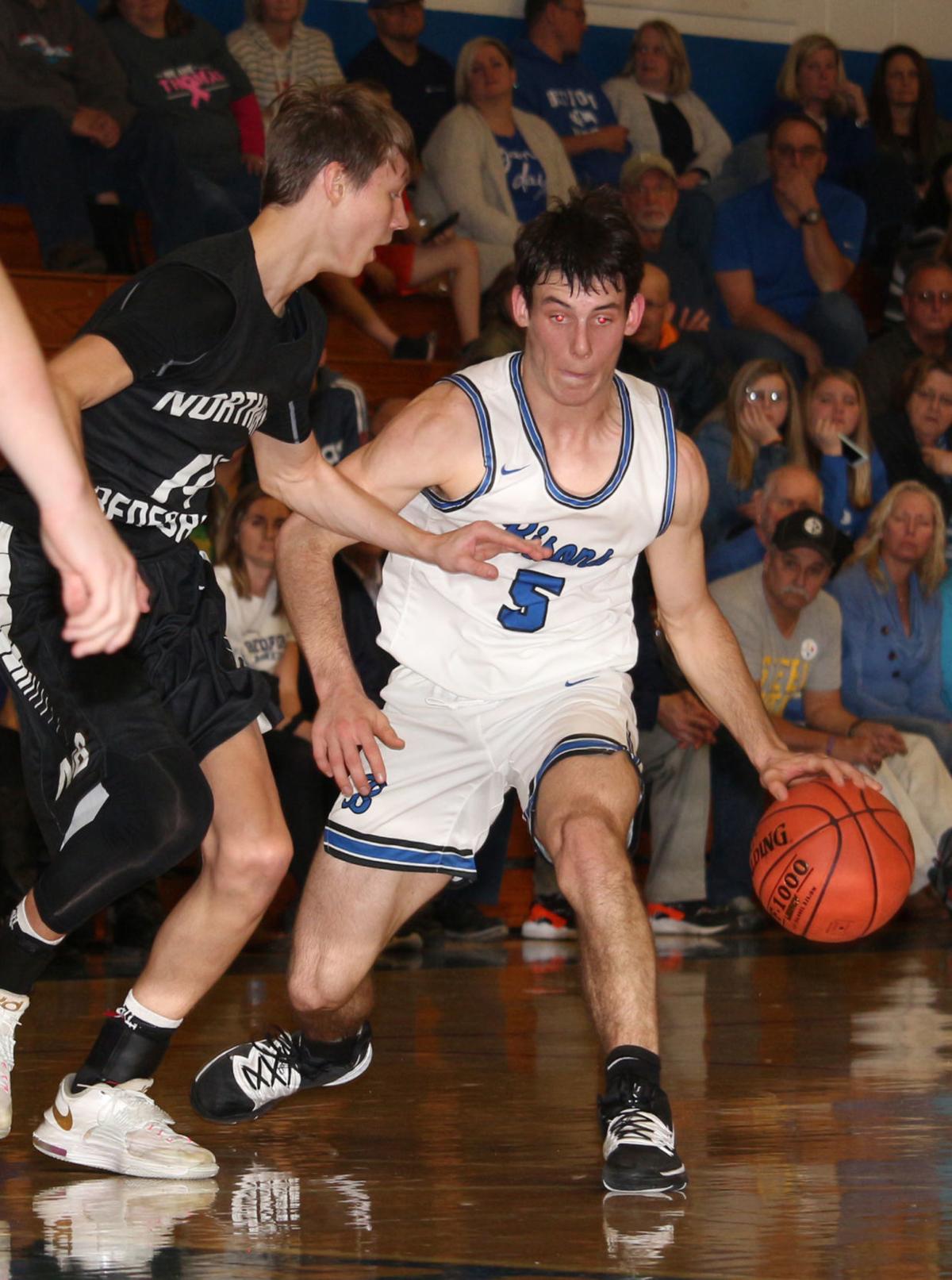 Bedford’s Steven Ressler, 5, dribbles the ball up the court while NBC’s Hayden Foor guards him during the third quarter, Friday. 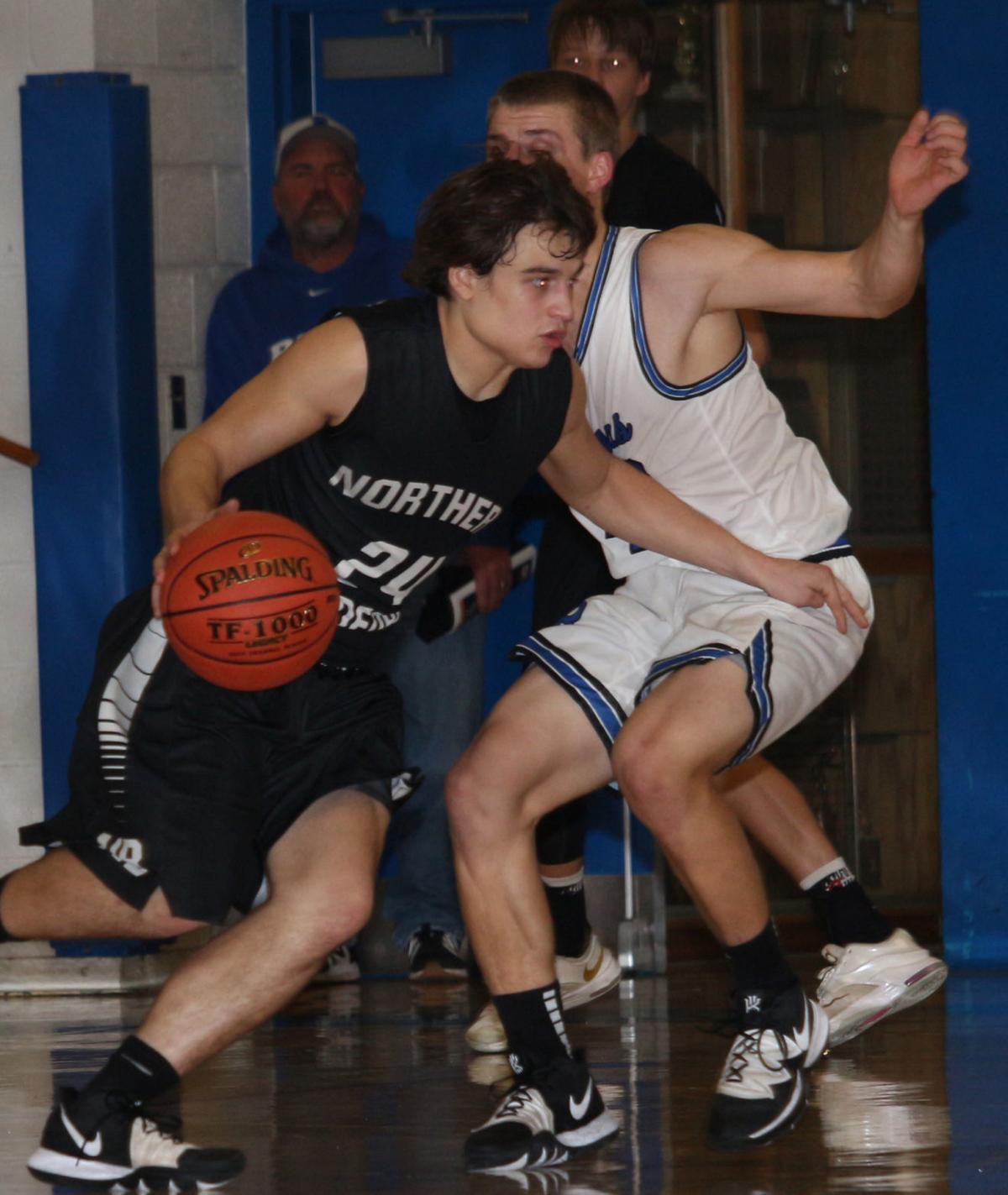 Northern’s Dalton Smith drives around Bedford’s Ethan Weber during the second half, Friday.

Northern Bedford’s Caleb Diehl looks to pass the ball during the second half against Bedford, Friday. Guarding Diehl is Bedford’s Mercury Swaim.

Northern Bedford’s Hayden Foor, 14, gets a shot off despite Bedford’s Miles Washington’s defensive pressure during the first half, Friday.

Bedford’s Drew Hall goes up for a lay-up during the third quarter against Northern Bedford, Friday.

Bedford’s Steven Ressler, 5, dribbles the ball up the court while NBC’s Hayden Foor guards him during the third quarter, Friday.

Northern’s Dalton Smith drives around Bedford’s Ethan Weber during the second half, Friday.

The season opener between the Northern Bedford and Bedford boys was a tight one through the first 19 minutes on Friday.

The two raced up and down the court exchanging baskets and Bedford’s offensive and defensive pressure allowed the hosts to outscore the visitors, 31-13 in the third quarter.

The Bisons kept their tempo going in an 83-51 victory.

“That third quarter was big for us,” said Bedford coach Jason Ressler. “It stretched it out for us.

“The second half was better defense and better rebounding. We got the ball to the rim.”

“We brought a lot of energy in the first half,” said Northern Bedford coach Randy Meck. “Bedford is a very talented team.

“We knew coming out in the third quarter we probably surprised them a little bit in the first half. We knew they’d come at us in the first two minutes. To their credit they hit shots. We just didn’t get it done.”

Holding a 38-33 lead at the half, Bedford opened with the initial basket scored at the start of the second half, but the Black Panthers added five points to make it a two-point game.

Steven Ressler hit a three-pointer, and after a free throw made by a Black Panther, he was one of four players to score for Bedford in a 13-point rally to push ahead and set the tone for the second half with a 56-39 lead.

Drew Hall opened the Bisons’ rally with a lay-up and Ethan Weber added one as well. Hall added a putback before Joey Koontz had a jumper inside the paint. Steven Ressler had another three-pointer before Koontz scored another basket.

Northern Bedford’s Caleb Diehl hit a three-pointer and Dalton Smith added one as well for the visitors after Koontz sandwiched a basket between the two NBC scores.

Bedford added to the lead outscoring Northern Bedford, 11-1, as the third quarter ended.

Hall scored both a three and a lay-up, while Koontz, Mercury Swaim, and Steven Ressler all had lay-ups during the stretch. Diehl added a free throw as the Black Panthers trailed, 69-46.

Hall was fouled as he scored a basket as the final period started, but he missed the free throw.

Diehl scored the lone NBC field goal of the fourth quarter with 7:13 remaining in the game.

Koontz, Hall, and Steven Ressler tallied a seven-point run before Smith went three for four at the line.

Bedford finished out the game with five points en route to an 83-51 victory.

“Northern Bedford is a lot better than they were last year,” coach Ressler added. “What an improvement they have made since last year.

“That first half was tough.”

While the second half was a blowout, the first half was anything but that.

Diehl opened with a four-point run, and after a putback by Koontz, the Black Panthers scored just one free throw out of four attempts.

Hall scored his first three of the game, while Northern Bedford’s Hayden Foor and Smith added back to back lay-ups to hold a 9-5 lead.

Swaim scored a jumper, and Steven Ressler added a pair of threes to push Bedford ahead, 13-9.

Northern Bedford took back the momentum with a six-point run by Diehl, Smith, and Evan Clouse as the Black Panthers led, 15-13, at the end of the first quarter.

Bedford rallied to take a lead as the second quarter began using a five-point stretch by Hall and a three by Steven Ressler for a 21-15 lead.

The two teams continued to exchange small runs in the second quarter, with Bedford’s final run of five points pushing them ahead at the half, 38-33.

“We turned the ball over,” Meck noted on the Panthers’ breakdown. “We quit running our offense. A lot of that had to do with Bedford’s defensive pressure.”

Bedford is back in action on Monday when the Bisons host Penn Cambria, while Northern Bedford visits Forbes Road on Tuesday.