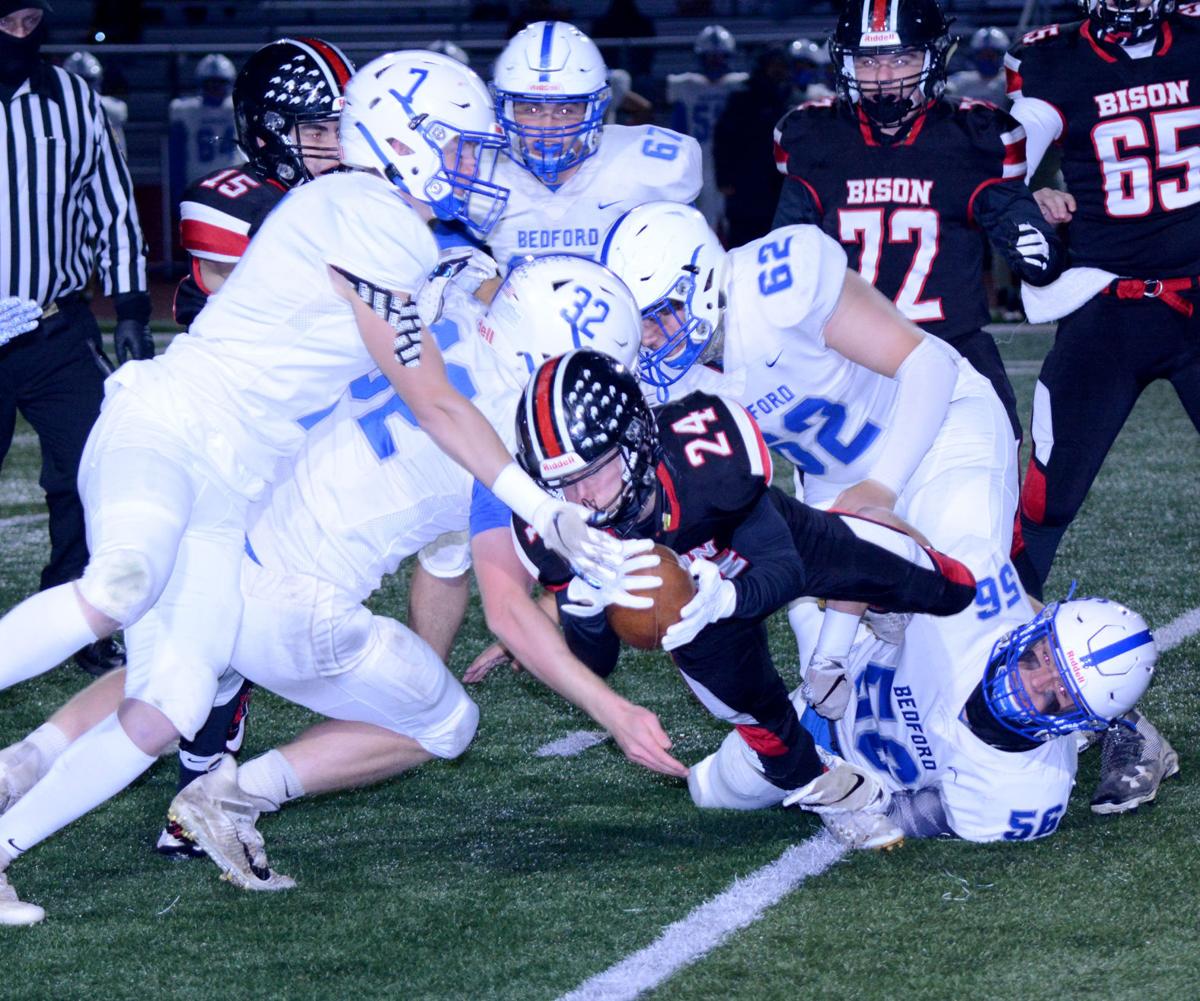 Five Bedford defenders team up to stop Clearfield running back Jason Plubell during the first quarter of Friday’s game. Bedford forced a pair of turnovers in the 40-21 win. 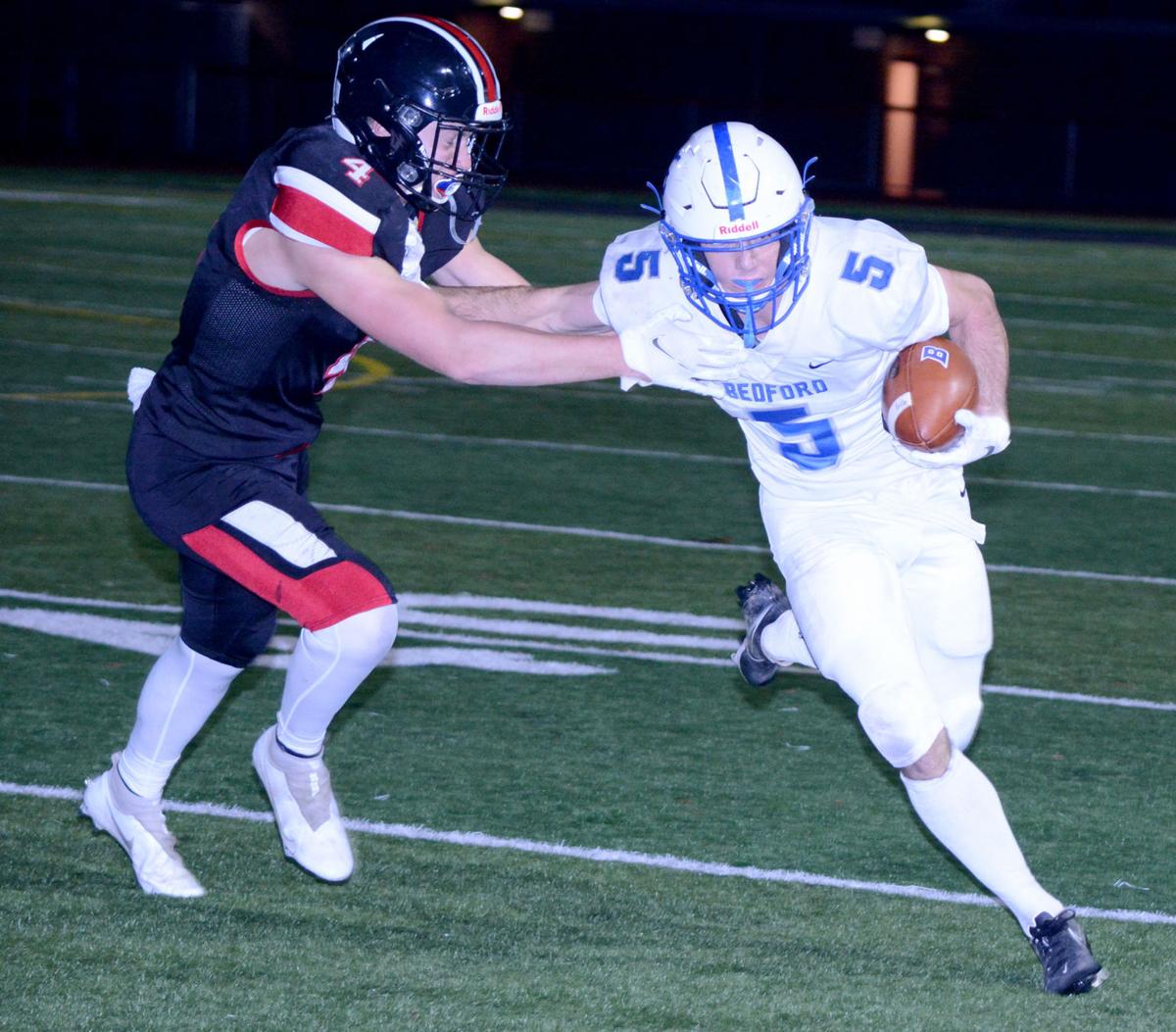 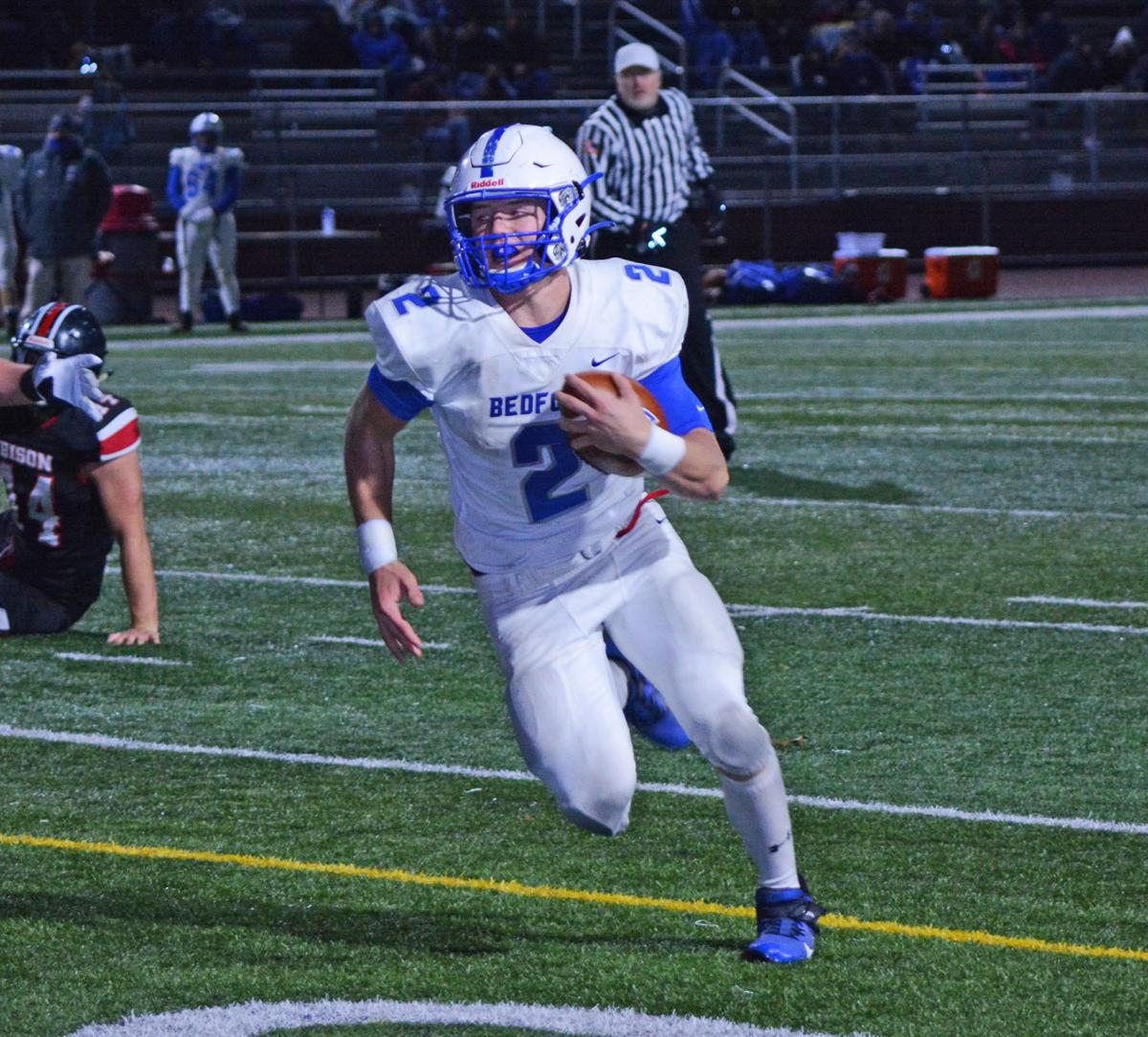 Bedford quarterback Mercury Swaim runs the ball during the second half of Friday’s game against Clearfield. Swaim rushed 19 times for 143 yards and two TDs, while throwing for 197 yards and three more scores in a 40-21 victory.

Five Bedford defenders team up to stop Clearfield running back Jason Plubell during the first quarter of Friday’s game. Bedford forced a pair of turnovers in the 40-21 win.

Bedford quarterback Mercury Swaim runs the ball during the second half of Friday’s game against Clearfield. Swaim rushed 19 times for 143 yards and two TDs, while throwing for 197 yards and three more scores in a 40-21 victory.

CLEARFIELD — The combination of Bedford quarterback Mercury Swaim and receiver Steven Ressler has become one of the area’s top pairings.

Clearfield found that out Friday night, as the two combined for seven passes and 153 yards, including three touchdowns, as the Bedford Bisons beat the host Bison, 40-21, in a District 5/6-AAA Subregional Championship.

The Bisons advance to the first round of the PIAA playoffs next weekend against the winner of Saturday’s District 6-AAA championship between Central and Tyrone.

The win was also a significant milestone for Bedford’s Kevin Steele, who earned his 100th career victory as a head coach at Bedford and Tussey Mountain.

While the final tally indicated a lot of scoring, the only points of the first quarter came late. Bedford turned the ball over with an interception on its first possession, and the Bisons had to punt on their second.

On their third possession, Swaim hit senior Greg Edwards for a 33-yard gain to get the ball into Clearfield territory. Swaim found Ethan Weber for a third-down conversion to get the ball to the 33.

Swaim threw his next pass to the back of the end zone, where Ressler caught it, just getting his two feet in bounds for the touchdown with 40 seconds left in the first quarter for a 6-0 lead.

The two teams exchanged fumbles, which gave Clearfield the ball on the Bedford 11. Three plays later, 6-5, 240-pound quarterback Oliver Billotte ran a quarterback sneak for a two-yard touchdown, and Grayson Graves kicked the extra point for a 7-6 lead with 9:02 left before the half.

The Swaim-to-Ressler combination came up big again on the locals’ next drive. Starting at the nine. Ressler caught a pass for 18 yards. After Swaim ran for four yards, he found Ressler wide open down the middle of the field for a 69-yard touchdown pass. The two-point attempt failed, and Bedford led, 12-7.

Bedford sacked Billotte six times in the game, and the Bisons got another to force a punt near the end of the half.

Bedford took over at its 16-yard line, and it took them 11 plays to go the length of the field, running a lot of quarterback draws with Swaim getting the final 10 yards for the scored with 20 second left on the clock before the half. Lizzy Martz made the PAT for a 19-7 lead going in at the half.

Bedford had the momentum to start the third quarter, but the Bisons threw an interception. Three plays later, Josiah Weyandt got a sack on Billotte with Brett Wilson recovering the ball at the home 24.

Weber got the touchdown on this drive, taking a pitch and rounding the corner for a 10-yard run. Martz’s kick made it 26-7 with 6:09 to go in the third quarter.

Weyandt got another sack of Billotte, this one on fourth down to give the ball to the local Bisons again.

Clearfield got a drive going and answered with Billotte finishing a drive with a one-yard sneak to cut the lead to 33-14 on the first play of the fourth quarter.

Swaim answered the call again after the teams exchanged possessions. Bedford ran the option and with Price and Swaim pulling against teach other for the ball, Swaim, kept control, stepped out of a tackle, and raced 54 yards for another score. Swaim finished the game with 155 yards rushing on 19 carries.

Clearfield scored late in the game to cut into the Bedford lead, but the Bisons held on for the 40-21 victory.