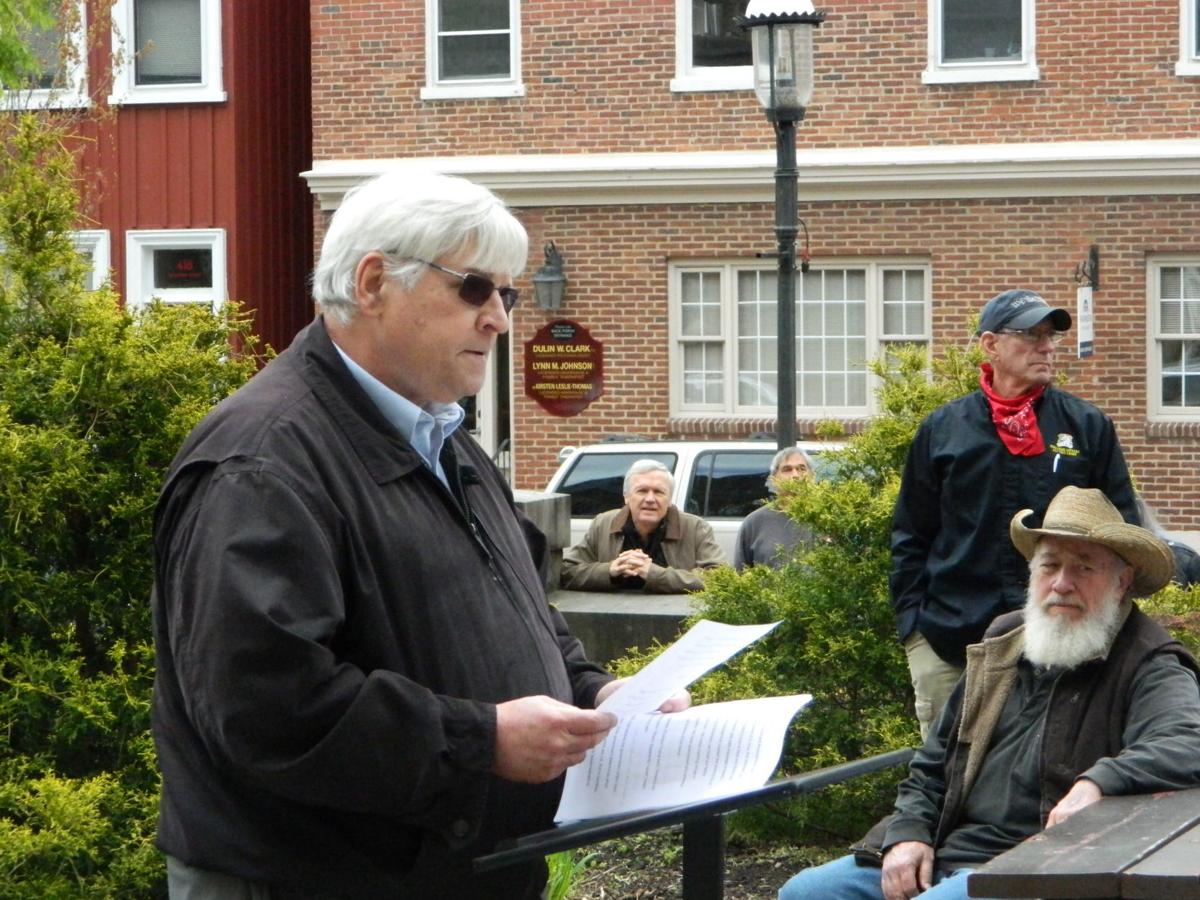 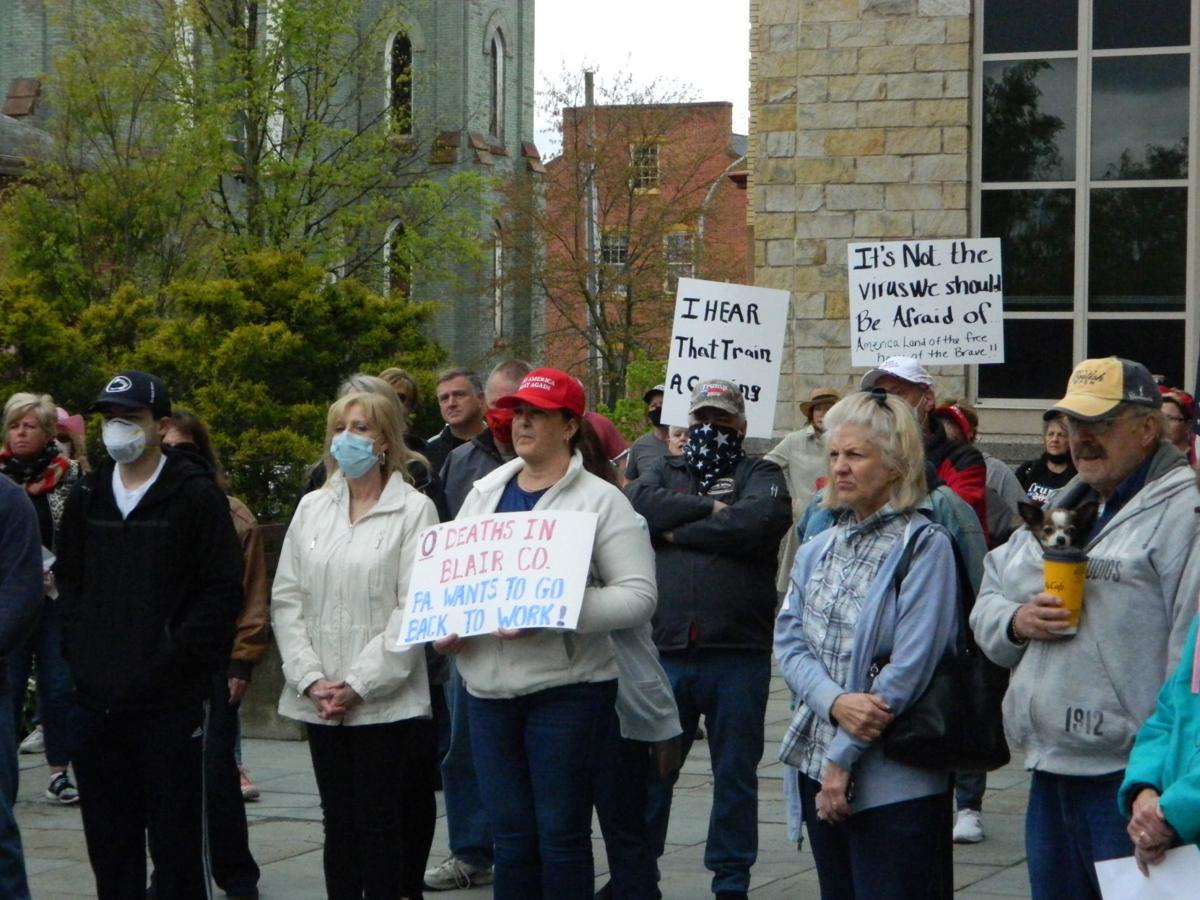 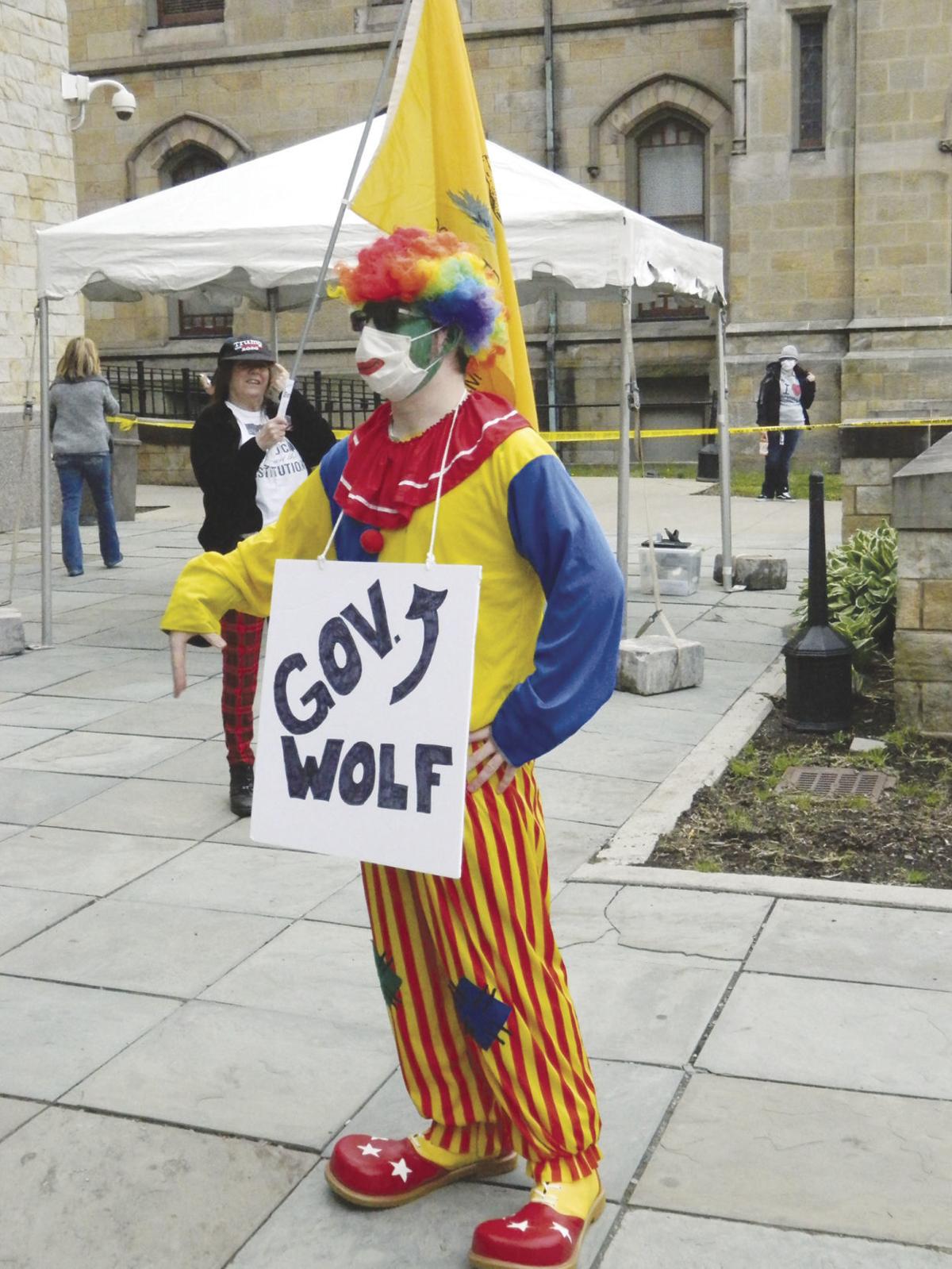 A man who gave his name only as “Honkler the Clown” poses for photos at a rally on Friday at the Blair County courthouse in Hollidaysburg.

A man who gave his name only as “Honkler the Clown” poses for photos at a rally on Friday at the Blair County courthouse in Hollidaysburg.

HOLLIDAYSBURG — Amid a general atmosphere of defiance, several dozen people from the region turned out Friday at a rally organized by the Blair County Tea Party to denounce Gov. Tom Wolf’s COVID-19 restrictions and call on the governor to allow Blair County and its neighbors to reopen.

The rally at the Blair County courthouse opened with the reading of a petition from Blair County Commissioner Amy Webster to Wolf, calling on him to abandon his statewide regional approach. Instead, it called on the governor to open the six-county Southern Alleghenies region as a group, as the entire region has had a markedly low incidence of the virus. It is an approach that also was urged by the Bedford County commissioners earlier in the week.

While some masks were in evidence, most at the rally went without, despite Wolf’s directive requiring them, and social distancing guidelines were widely ignored.

Among the speakers was former state Rep. Dr. John McGinnis, who represented Altoona in the state House from 2012 to 2018. McGinnis, now a WRTA radio morning personality, was scathing in his criticism state and national shutdown orders.

“How do we look around America and Pennsylvania with anything but shame?” he asked.

“We have abandoned any pretext of being the land of the free and the home of the brave.”

McGinnis, pointing to President Donald Trump’s 2019 State of the Union address in which he asserted that “America will never be a socialist country,” said “Make no mistake. We are a socialist nation right now.”

He went further, pointing out that the rally was taking place on May 1, May Day, “the traditional day of celebrating communism and the ideas of Karl Marx.”

Also speaking at the rally was Harrisburg attorney Marc Scaringi, who sued unsuccessfully in the state Supreme Court to overturn Wolf’s directives. Scaringi, who has taken his case to the U.S. Supreme Court, argued that, “The Constitution has, in fact, been suspended.”

Scaringi said one of his arguments challenging the state Supreme Court decision was that its reasoning was based on data from the state Department of Health that he felt was inaccurate, and saved some of his harshest criticism for state Health Secretary Dr. Rachel Levine.

Pointing out that a large percentage of the state’s deaths due to the virus have happened among residents of nursing homes and other senior care facilities, Scaringi said, “She has been so busy shutting down businesses and quarantining healthy people that she left those most at risk. This is not science; this is gross negligence.”