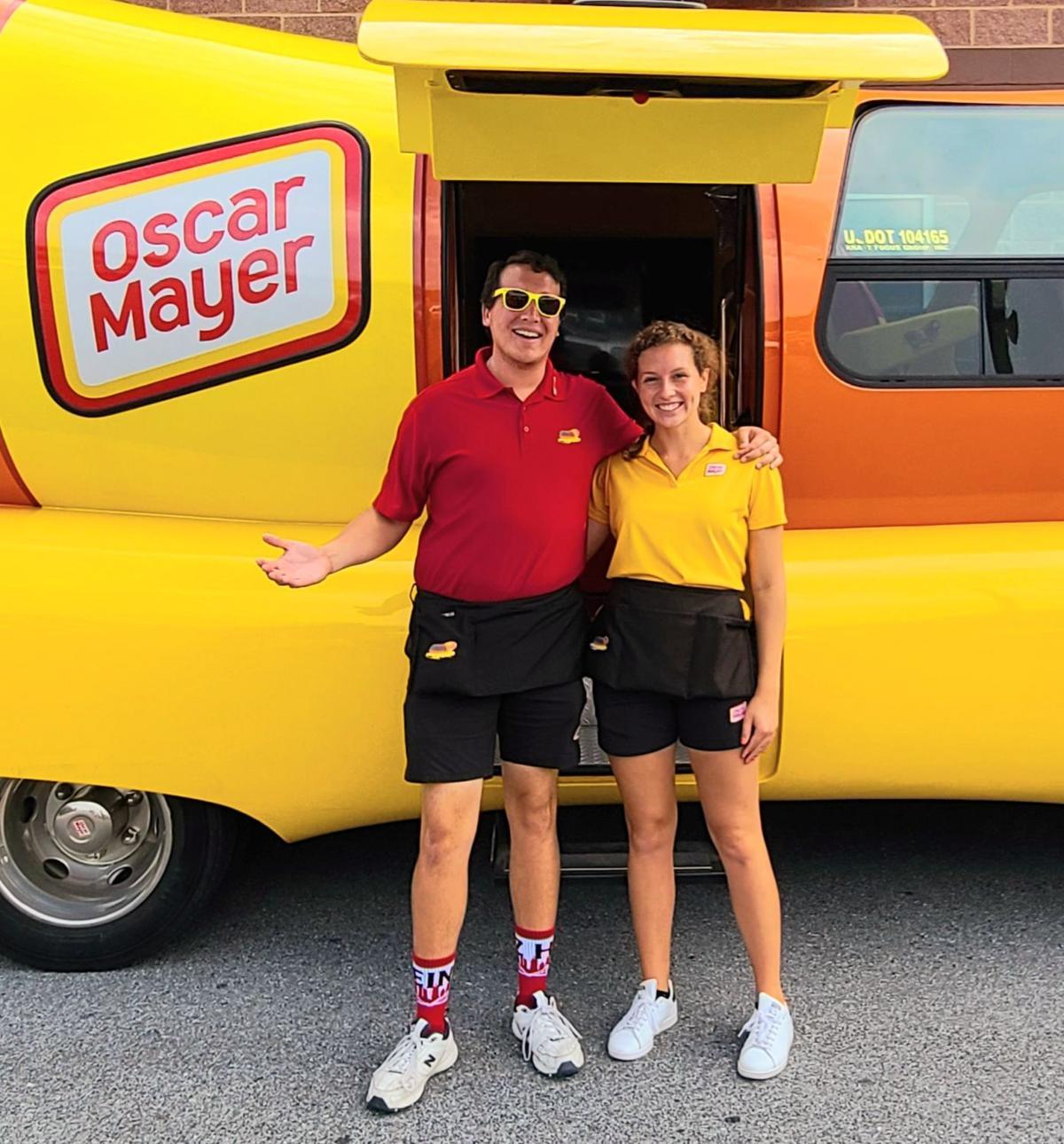 Oscar Mayer employees Nick Ruybalid and Caroline Frankenfeld brought the famous wienermobile to the Saxton on Sunday for a visit. The wienermobile made an appearance at the Saxton Market. 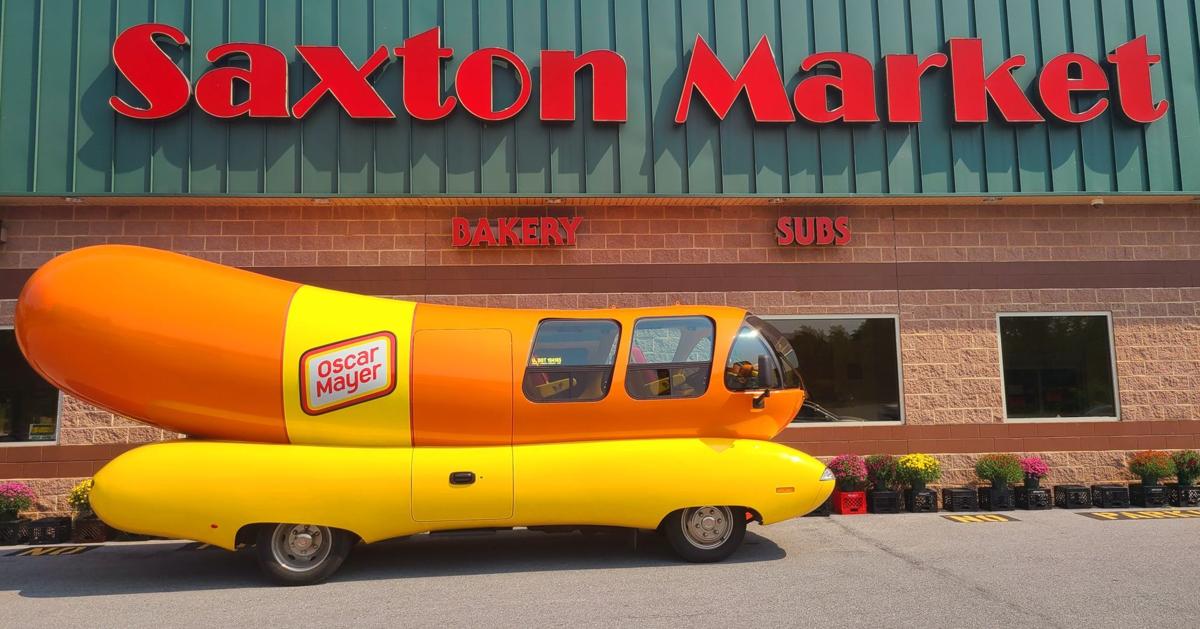 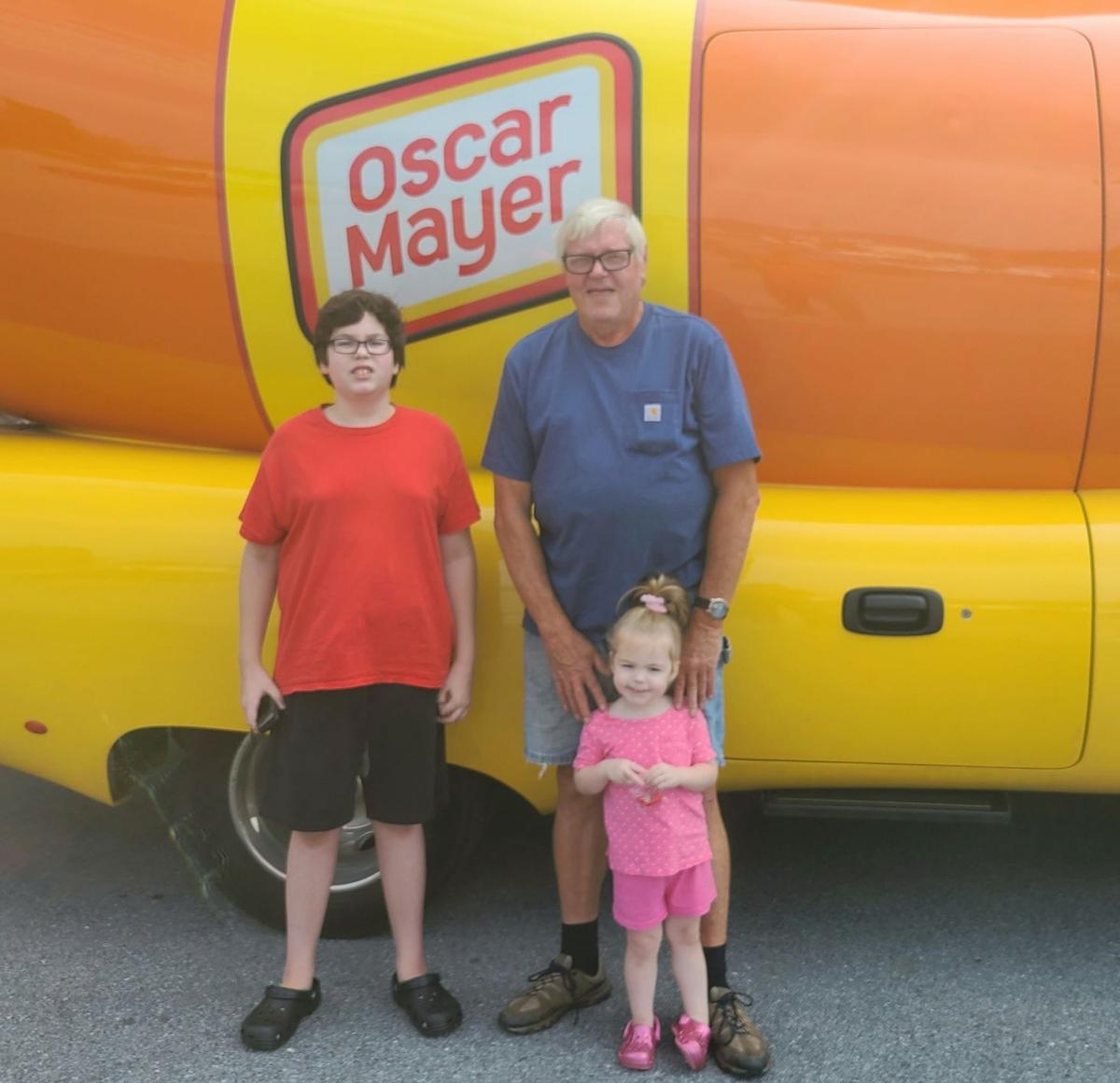 Saxton R.D. resodent William “Pete” Ritchey and his grandchildren Michael 12, and Amanda, 2, were three of several area adults and children who stopped by the Saxton Market on Sunday to see the famous Oscar Mayer wienermobile.

Oscar Mayer employees Nick Ruybalid and Caroline Frankenfeld brought the famous wienermobile to the Saxton on Sunday for a visit. The wienermobile made an appearance at the Saxton Market.

Saxton R.D. resodent William “Pete” Ritchey and his grandchildren Michael 12, and Amanda, 2, were three of several area adults and children who stopped by the Saxton Market on Sunday to see the famous Oscar Mayer wienermobile.

Children of several past generations sang along with that familiar jingle for many years when it came across the television. They also sang along with it when the familiar orange and yellow Oscar Mayer wienermobiles made their way across the country in personal appearances like the one held from 10 a.m to 2 p.m. Sunday at the Saxton Market.

Many area residents both young and old alike had their photographs taken beside the large wienermobile that was poised in front of the building. Bringing the 27-foot long, 11-foot tall and 8-foot wide wiernermobile to Saxton were Oscar Mayer employees Caroline “Chili Cheese” Frankenfeld and Nick “Nick-a-Roni” Ruybalid.

Ruybalid said this is the 85th year for the Oscar Mayer wienermobile. The first wienermobile was created in 1936 by Carl G. Mayer, nephew of company founder and namesake Oscar Mayer.

Ruybalid explained that there have been numerous wienermobiles over the years since 1936. The 1936 and 1940 models were disassembled and turned over to the United States government to be used during the scrap drive of World War II.

The 1952 model is in the Henry Ford Museum in Dearborn, Michigan, and the 1958 model no longer exists. The 1969 model is on display in Puerto Rico and the 1976 model on display in Mexico. In 1988 a “Hotdogger” program was started and six individual wienermobiles were put on the road with them being headquartered on Madison, Wisconsin.

Frankenfeld and Ruybalid said the wienermobiles travel all over the country and have been in all 50 states and in London and Europe. They were ferried by boat to Alaska and Hawaii and one in 1999 was loaded on to Air Force One and flown to England where it was later ferried to Germany where it toured different cities in Europe.

Ruybalid said the entire wienermobile, a 2018 model, weighs seven tons and is made entirely of Fiberglas. The vehicle contains six seats and a large compartment area where employees keep personal items while traveling on the road.

While 3,000 to 4,000 applications are received to be Oscar Mayer wienermobile driver, Frankenfeld said only 12 are chosen to drive the six wienermobiles. Those chosen are required to attend “Hotdog High,” a two-week training program to learn the in and outs of the Oscar Mayer program.

Ruybalid said that he and Frankenfeld have worked as a team since mid-June and their partnership will end in January, 2022 when they will each be assigned another partner and another area of the country to cover. Their jobs will both end in mid-June 2022 when new employees will take their place as “hotdoggers.”

Frankenfeld is originally from Austin, Texas while Ruybalid is from Trinidad, Colorado. Ruybalid said Trinidad is much like Saxton.

Both stated the wienermobile is actually easy to drive. It is equipped with four-wheel drive and had “dualies” or two tires each on its back side.

Many who came to see the wiernermobile at Saxton had never actually seen one before. Some adults stated they have passed them on different places on the highway while others still said they had only seen them on television.