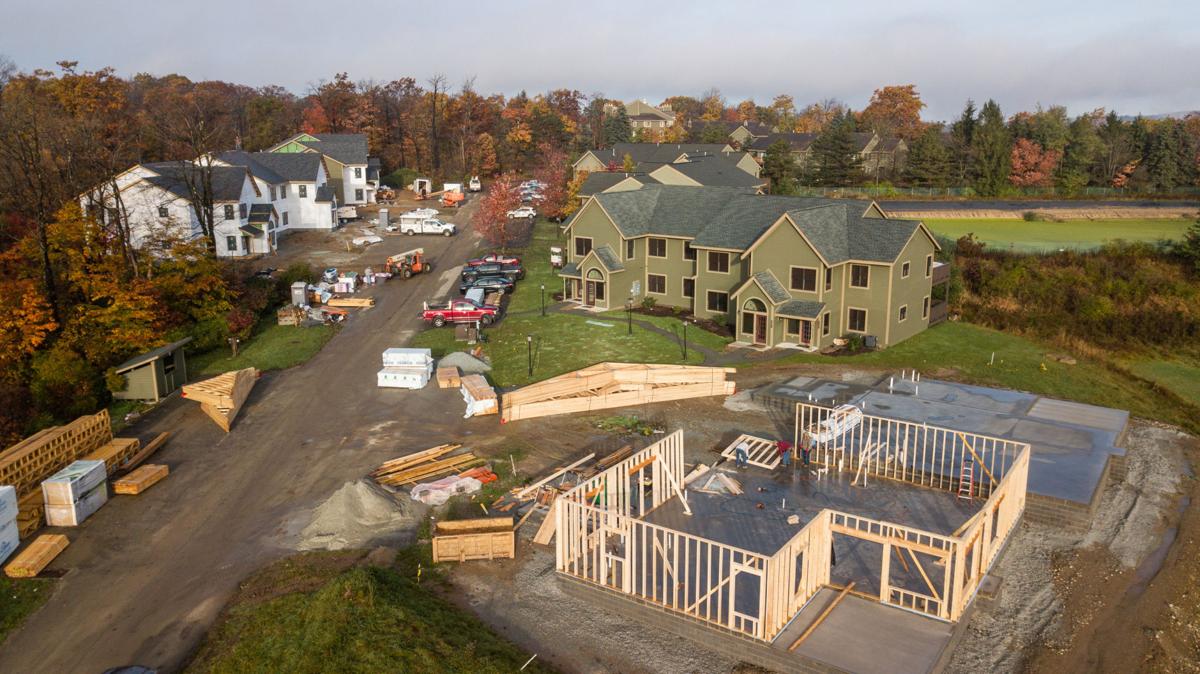 New construction in the North Summit Condominium neighborhood in Hidden Valley photographed on Oct. 28 in Somerset County. The 3-bedroom, 2-bath resort homes are listed starting at 395,000. Sales of resort homes in Hidden Valley, Seven Springs and Indian Lake have boomed in recent years along with other rural areas of Pennsylvania, according to a new report by the Pennsylvania Rural Association. 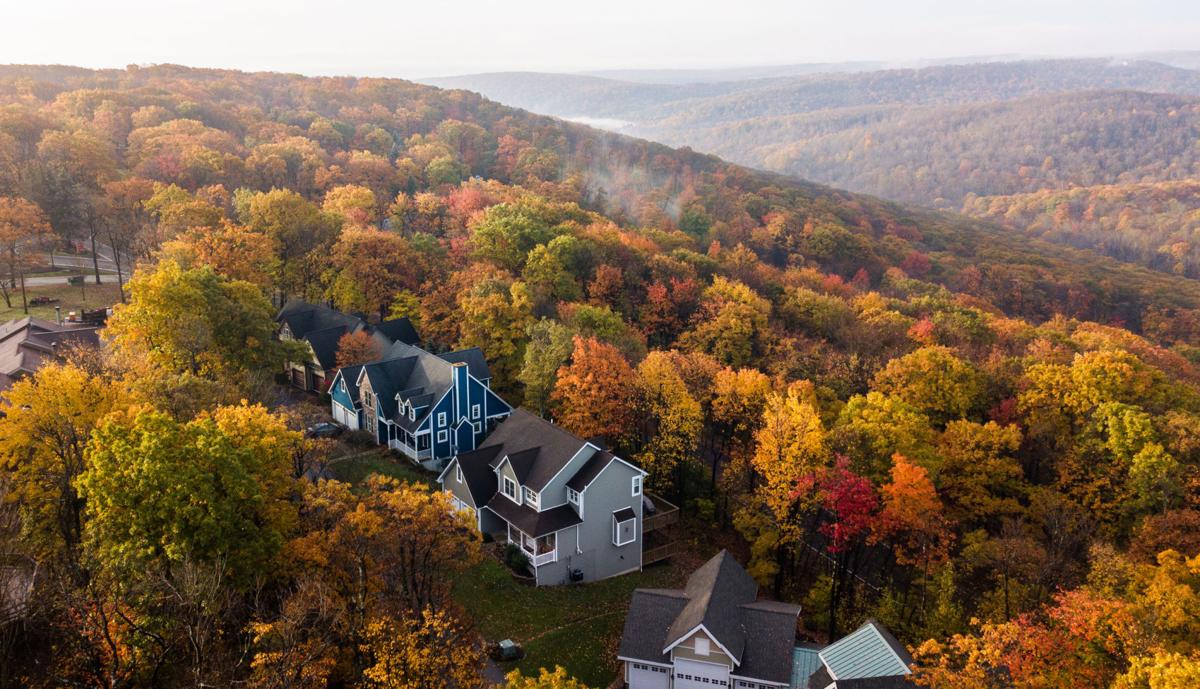 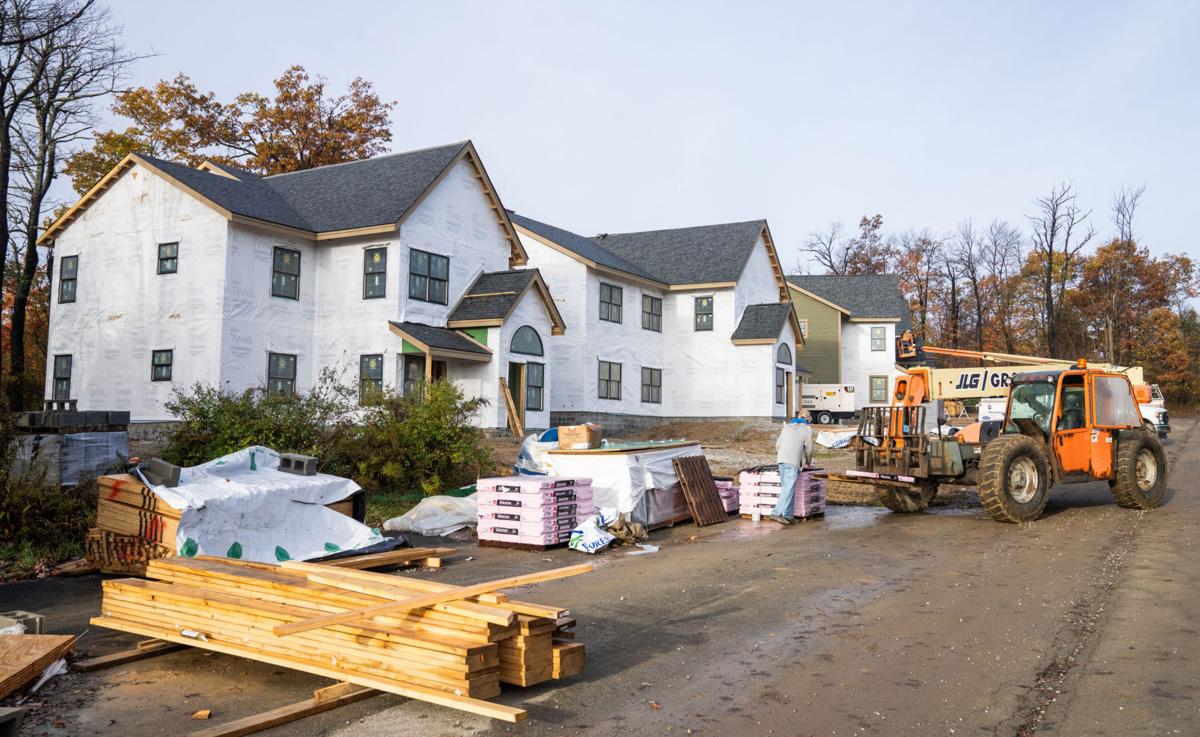 New construction in the North Summit Condominium neighborhood in Hidden Valley photographed on Thursday, Oct. 28, 2021, in Somerset County. The 3 bedroom, 2 bath resort homes are listed starting at 395,000. Sales of resort homes in Hidden Valley, Seven Springs and Indian Lake have boomed in recent years along with other rural areas of Pennsylvania, according to a new report by the Pennsylvania Rural Association.(Andrew Rush/Pittsburgh Post-Gazette)

New construction in the North Summit Condominium neighborhood in Hidden Valley photographed on Oct. 28 in Somerset County. The 3-bedroom, 2-bath resort homes are listed starting at 395,000. Sales of resort homes in Hidden Valley, Seven Springs and Indian Lake have boomed in recent years along with other rural areas of Pennsylvania, according to a new report by the Pennsylvania Rural Association.

New construction in the North Summit Condominium neighborhood in Hidden Valley photographed on Thursday, Oct. 28, 2021, in Somerset County. The 3 bedroom, 2 bath resort homes are listed starting at 395,000. Sales of resort homes in Hidden Valley, Seven Springs and Indian Lake have boomed in recent years along with other rural areas of Pennsylvania, according to a new report by the Pennsylvania Rural Association.(Andrew Rush/Pittsburgh Post-Gazette)

With their daughter Abby ready to graduate from college, Kevin and Cathy Glikes, of Robinson, went shopping for a second home.

What they found for sale online was a cozy, three-bedroom, 2½-bath condominium in Seven Springs Mountain Resort that Ms. Glikes, 58, said she and her husband, 63, quickly fell in love with.

“When we saw our place — it was just home,” said Ms. Glikes, a retired preschool teacher. “It’s a nice getaway from the big city. It was just the right time.”

It has been just the right time for many others to move to rural Pennsylvania — even from Maryland, Virginia, Florida and Texas, a new report by the Center for Rural Pennsylvania found. But along with the move has come traffic congestion on twisting country roads and worries about broadband speed, trash pickup and other municipal services that can be lacking in small towns.

The Center for Rural Pennsylvania, an advisory group to the General Assembly, found the number of home sales and median home prices boomed in five rural Pennsylvania counties during the height of the COVID-19 pandemic — March through December 2020 — when compared to the same period in 2019.

The focus of the study was the counties of Monroe, Pike, Wayne, Susquehanna and Somerset, where the Glikes bought their condo about two months ago.

Along with an increasing number of property transfers came ballooning median home prices.

In Somerset County, for example, the median pre-pandemic home price was $49,000, according to the study, which was based on state tax and county assessor records.

During the height of the pandemic, the median home price exploded by 200% to $150,000. Actual sale prices were sometimes much higher: The Glikes, for example, paid $316,523 for their condo.

Most of the newcomers to Somerset County from out of state came from urban areas, where the COVID-19 rates were higher than in rural areas as the pandemic hit.

Wayne, Forest and Pike counties had the highest percentage increases in residential property transfers when comparing the March to December periods in 2019 and 2020, each seeing an increase in excess of 40%.

Even Fayette County, which was not part of the study, saw an 11.6% increase in residential property sales between 2019 and 2020, despite a sharp increase in COVID-19 cases that nearly overwhelmed WVU Medicine’s Uniontown Hospital in December 2020.

Armstrong, Philadelphia and Washington counties had the biggest percentage decrease in property transfers over that period, each with a drop of more than 19%.

“The people in the big cities want to get away,” said Patricia A. Peifer, Somerset County recorder of deeds. The office collects a 2% real estate transfer tax that is split among the state, local municipalities and school districts. “Seven Springs, Hidden Valley, Indian Lake — we’ve seen a big increase.”

Spurring the move to the country were the businesses and schools closed due to COVID-19, according to the study. But the influx of newcomers to rural parts also brought concerns about broadband speed, trash collection and other municipal services, according to state Sen. Lisa Baker, a Republican from Luzerne County.

“Business closures, job restructuring and health worries have caused more people to relocate,” she said at a Harrisburg news conference on Wednesday when the report was released. “Traffic congestion — something we only saw during the seasonal summer months — is now becoming a year-round concern.”

At the news conference, state Sen. Gene Yaw, a Republican from Lycoming County who chairs the Center for Rural Pennsylvania, said such issues were the reason that representatives from rural parts of the state must continue to lobby for funding to address problems arising from increasing population.

Some businesses are benefiting from the trend, Ms. Baker added: One supermarket in her district reported a 20% increase in sales due to the spike in residential home sales while truck drivers are reporting “off the chart delivery numbers.”

The increase came just in time for Rockwood Area School District, which has 650 students in kindergarten through 12th grade.

Seven Springs set a real estate sales record of $46 million for the year ending Sept. 30, more than double the sales of $16 million for the previous year, said Alex Moser, director of marketing and communications at the resort.

“As fast they go on the market, they go off the market,” Mr. Moser said. “It’s unbelievable. People saw the value of getting out of the city.”

Although the report suggested that COVID-19 worries drove the real estate boom in rural parts of Pennsylvania, Ms. Glikes said it was not a factor in her family’s decision to buy their condo.

In fact, neither of them ski in a community built around a mountain ski resort and they have no plans of renting their unit for part of the year as some homeowners do to offset the expenses of owning a second home.

Instead, she and her husband enjoy the quiet of the country, especially in a place with nearby restaurants within the complex and so many outdoor activities. And she loves her home’s amenities, which include a galley kitchen and fireplace.

“We just love Seven Springs,” she said, adding that it’s only a little over an hour’s drive from Pittsburgh. “There’s always something to do.”