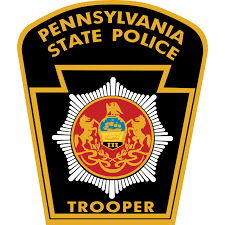 An Ohio man was arrested in Bedford County after he allegedly stole a firearm from a sporting goods store, fled in a stolen vehicle, robbed a man at gunpoint for another vehicle in Breezewood, and then led police on a pursuit through parts of two counties.

The manager of the store told police a man, later identified as Logsdon, entered the store and started looking at knives before requesting to see a Smith and Wesson handgun, according to court documents. As multiple knives and the firearm were on the counter, Logsdon asked an employee the cost of the gun. When the employee turned his back to check the price, Logsdon allegedly took one knife and the gun and ran out of the store.

The employee chased after Logsdon and witnessed him flee in a silver Toyota Corolla, documents said. Police checked the license plate number of the vehicle and determined it was a stolen vehicle out of Altoona.

Later that morning, about 8:45 a.m., police received a report of a robbery at the Marathon Gas Station, 16521 Lincoln Highway, Breezewood.

The victim of the robbery, Bruce Jenkins, told police he was parked at a gas pump when a man, later identified as Logsdon, approached him with a pistol in his waistband and demanded the keys to his Mercedes-Benz SUV, documents said.

After refusing to hand over the keys, Logsdon allegedly pointed the gun at Jenkins and again demanded the keys. Jenkins told police he gave the robber his keys and the man fled the parking lot in his vehicle.

The stolen Mercedes had a tracker and police were able to locate the vehicle using an app on the Jenkins’ phone.

Logsdon was arrested and arraigned before District Judge H. Cyril Bingham. He was lodged in the Bedford County Correctional Facility in lieu of $200,000 bail.

Police later spoke with the owner of the stolen Toyota Corolla, who told investigators he had left his vehicle unlocked and running while he went into a Sheetz in Altoona about 4:30 a.m. that morning.

When questioned by police, Logsdon admitted to stealing the car in Altoona before driving to the store in Saxton, where he stole the firearm and knife, documents said. Logsdon continued to explain that he then went to Sheetz in Breezewood, where he stole an egg sandwich, before stealing the Mercedes at another gas station. Logsdon confirmed that he pointed the gun at the owner of the Mercedes and demanded the keys, police said.

In addition to the robbery and aggravated assault charges, Logsdon was charged with felony counts of theft by unlawful taking, receiving stolen property, retail theft and firearms not to be carried without a license, as well as misdemeanor counts of terroristic threats, simple assault, recklessly endangering another person, unauthorized use of a motor vehicle, fleeing police and receiving stolen property.

The charges resulting from the vehicle theft in Altoona will be prosecuted in Bedford County as it was part of one continuing course of conduct, District Attorney Lesley Childers-Potts said in court documents.