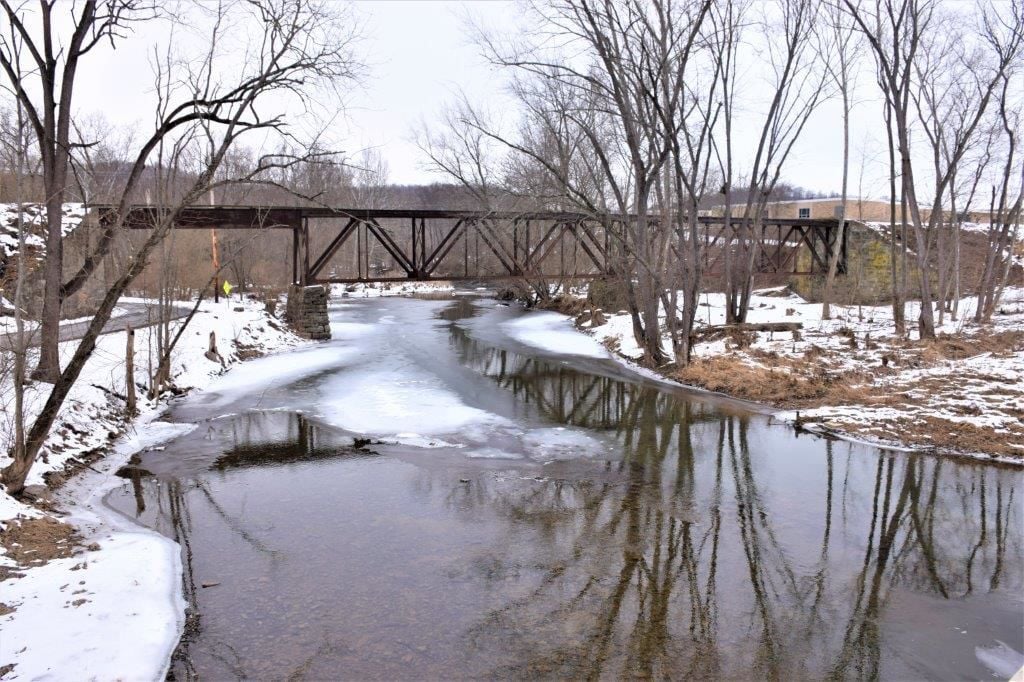 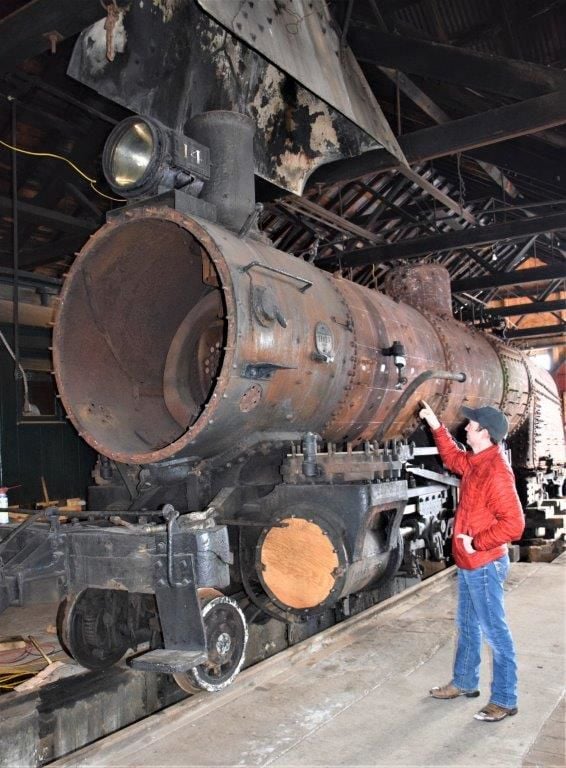 Jonathan Smith, new director of sales and marketing for the historic East Broad Top Railroad Foundation Inc., describes ongoing restoration off EBT steam locomotive No. 14 at Rockhill, one of two locomotives being prepared for service on the historic railroad.

Jonathan Smith, new director of sales and marketing for the historic East Broad Top Railroad Foundation Inc., describes ongoing restoration off EBT steam locomotive No. 14 at Rockhill, one of two locomotives being prepared for service on the historic railroad.

Restoration work continues at the historic East Broad Top with plans to offer a variety of activities this year, reports Jonathan Smith, new director of sales and marketing with the nonprofit East Broad Top Foundation Inc.

“The restoration work is progressing in a variety of ways,” announced Smith, who assumed his duties in December. “Work crews have been busy working on trackage, switches, steam locomotives and stabilization and restoration of several buildings and rolling stock.”

Although an exact date for the return to steam operations this year was not known, foundation officials said that they are moving ahead with rehabilitation of two steam locomotives and other rolling stock, doing most of the work in the railroad shops at Rockhill, home of the coal-hauling railroad.

“Most of the work is taking place in the railroad shops although some specialty work has been contracted out to the Strasburg Railroad,” explained the 22-year-old Smith, a native of Durango, Colorado, who now lives in Huntingdon. “We want to see the steam railroad back in steam service sometime this year, that is the goal we are working toward.”

It has been a year since the Feb. 14, 2020, announcement of the sale of the railroad by the Kovalchick family of Indiana, Pa. to the new EBT Foundation Inc. Since then, a considerable amount of work has taken place at Rockhill, noted Smith.

The East Broad Top Railroad National Historic Landmark, recognized as the only surviving three-foot gauge common carrier railroad east of the Rocky Mountains, includes not only the railroad structures and rolling stock at Rockhill (including six steam locomotives), but 27 miles of intact railroad right of way between the southern end of the concrete-arch bridge (a few miles south of Mount Union) to Robertsdale/Wood on the Broad Top Coal Field.

Tourist service on the EBT ended Dec. 23, 2011, its future uncertain while volunteers from the Friends of the EBT continued various maintenance and restoration work at Rockhill and Robertsdale, Smith explained. The foundation’s plans to reopen the railroad this year has attracted renewed interest and support for the ongoing restoration work with an eye on potentially reopening the railroad south to the Broad Top.

“Nothing is written in stone and we are not making any promises we cannot keep,” said Smith. “But what we would like to do is tell the entire story of the EBT corridor, showcasing all aspects of the railroad.”

Smith went on to explain that the “EBT story” encompasses a variety of components ranging from steam railroading and coal mining to ironmaking and the transportation of other valuable resources during the railroad’s proud century-plus history.

The EBT, documented as the only railroad system left in its entirety, including its multi-purpose 1880s railroad shops at Rockhill, remains a major attraction for rail fans throughout the world, Smith added. A highlight of the original 33-mile-long narrow-gauge operation is the southern stretch of the railroad which offers an abundance of scenic and natural surroundings as well as the industrial importance of the Broad Top area, something rail fans find intriguing.

And while the foundation’s main focus is getting the EBT back into service between Colgate Grove, south of Shirleysburg, and Rockhill, EBT employees and Friends of the EBT (FEBT) volunteers continue to evaluate the railroad right of way south to the Broad Top, said Smith.

To date, inspections of the major railroad trestles between Rockhill and Robertsdale indicate that they are structurally sound but will require rehabilitation before any restoration of the line south takes place.

The Sideling Hill Tunnel was also determined restorable while considerable work will be needed to put the southern-most Rocky Ridge Tunnel back in service, added Smith (There are some hints at reopening the EBT’s scenic Coles Valley branch from the main line in Coles Valley to the former coal mining town of Joller on the eastern side of Wrays Hill--Broad Top--Mountain).

Smith explained that the foundation hopes to complete the rehabilitation of the EBT right of way north to Colgate Grove by this spring as other trackage improvements continue in the EBT yards at Rockhill. Other ongoing restoration work taking place at Rockhill includes steam locomotives numbers 14 and 16 as well as passenger car No. 8, which are in the repair shops.

Work is continuing with the restoration of numerous original EBT coal hoppers (some brought to Rockhill from Mount Union while three other coal hoppers were moved to Robertsdale last fall), railroad carpentry shop (funding for the project coming from the Friends of the East Broad Top), freight station, documentation of the railroad storehouse and much more.

On the southern end of the EBT at Robertsdale, the FEBT is gearing up for the opening of its museum complex on Saturdays beginning this summer, continued work on museum displays, right of way improvements and the construction of a new roof on the former EBT Depot.

As long-term planning continues, the foundation, in cooperation with the Rockhill Trolley Museum and FEBT, is gearing up for several special activities this year. Among them include:

• The revival of the popular EBT Winter Spectacular, set for Saturday, Feb. 20, (nearly sold out) which will feature various train consists pulled by the railroad’s diesel locomotives and the famous M-1 gas-electric passenger coach as well as special caboose consists. The excursions include round trips to McMullin’s Summit, north of Rockhill.

• “Easter on the Rails,” scheduled for Saturday, March 27.

Smith stressed that all events will closely adhere to COVID-19 guidelines, with guests asked to wear facial coverings while the train’s capacity will be limited to 50 percent to allow for proper social distancing.

The new foundation’s sales and marketing director has been a fan of the EBT for many years and is delighted to be a part of the railroad’s restoration efforts. Soon to be a graduate of the Metropolitan State University of Denver with a degree in travel and tourism management, Smith has worked at several popular steam railroads across the nation including the 45-mile-long narrow-gauge Durango & Silverton Railroad in Colorado.

“I’ve followed the EBT for many years and see considerable potential for the railroad as well as economic development for the area; I am proud to be involved with the restoration project,” concluded Smith.