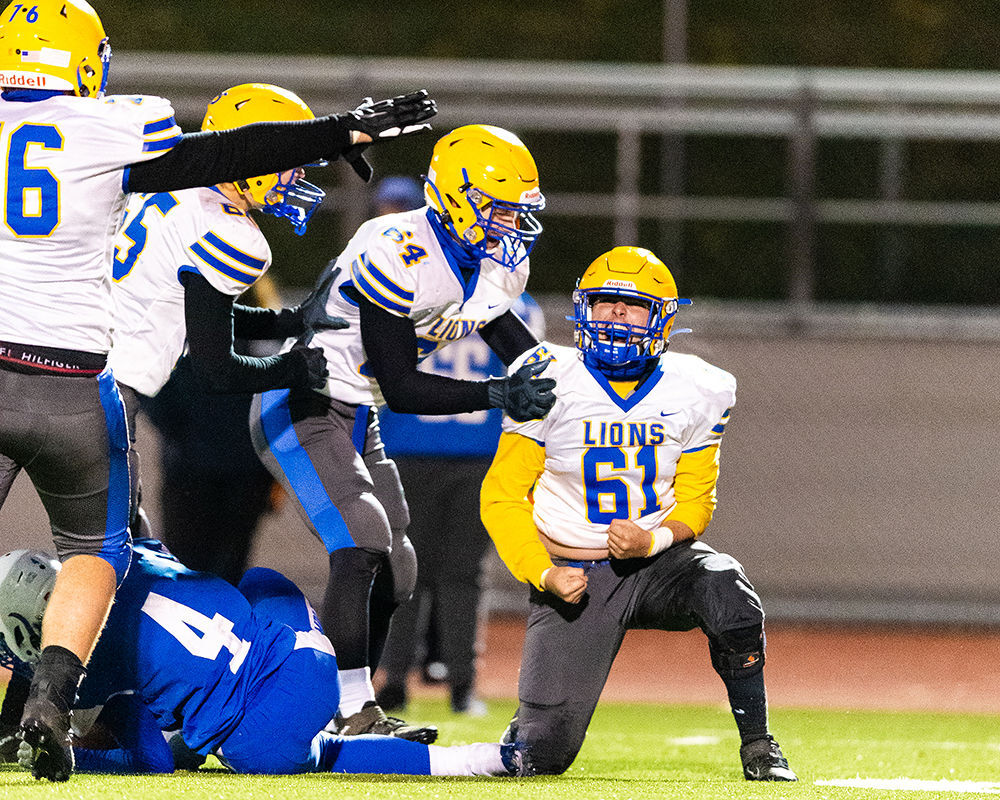 Chestnut Ridge’s Kai Bollman, 61, is congratulated by teammates after a stop on fourth and seven to seal the District 5-AA semifinal victory over Windber, Friday. 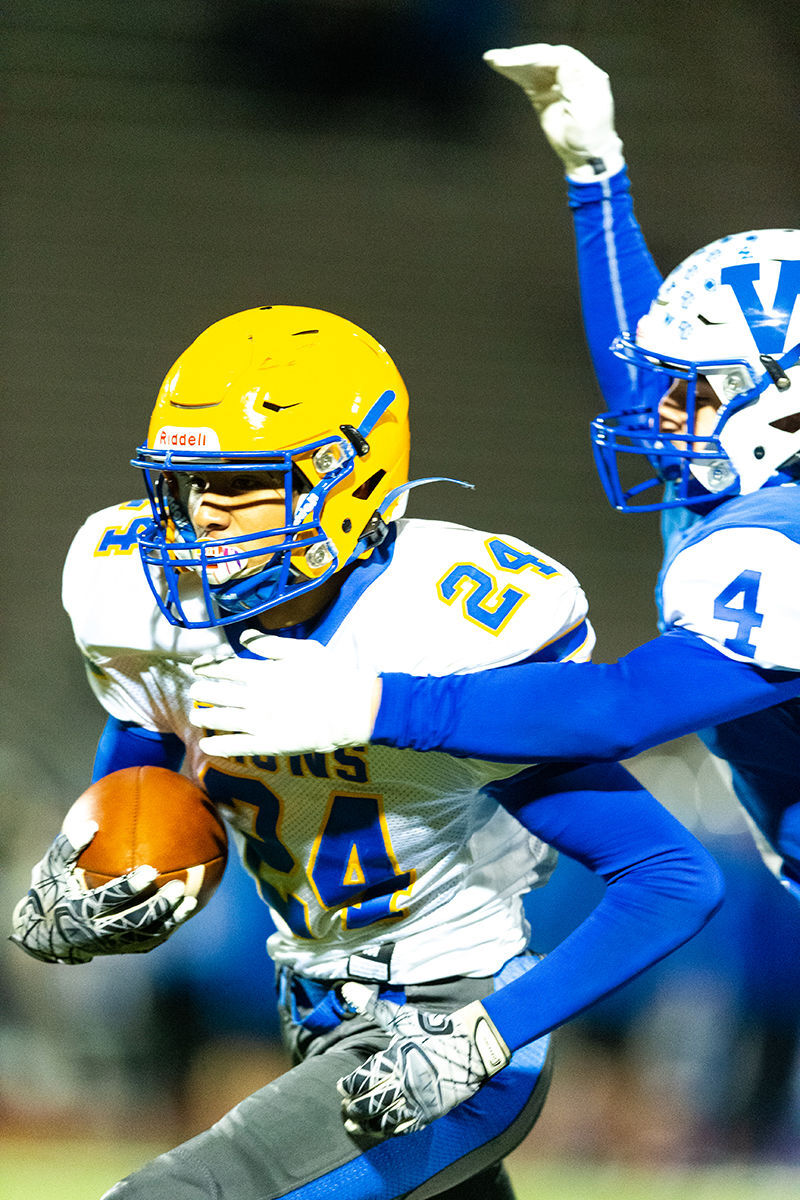 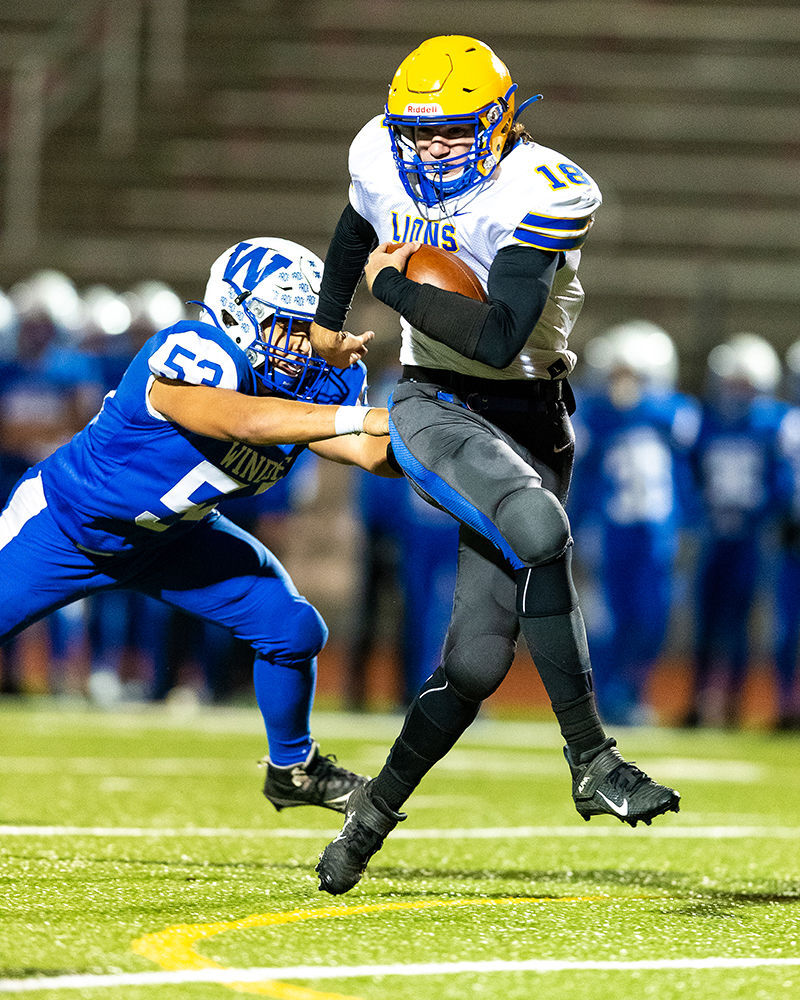 Logan Pfister runs on a quarterback keeper for the final touchdown of the game for Chestnut Ridge, Friday. 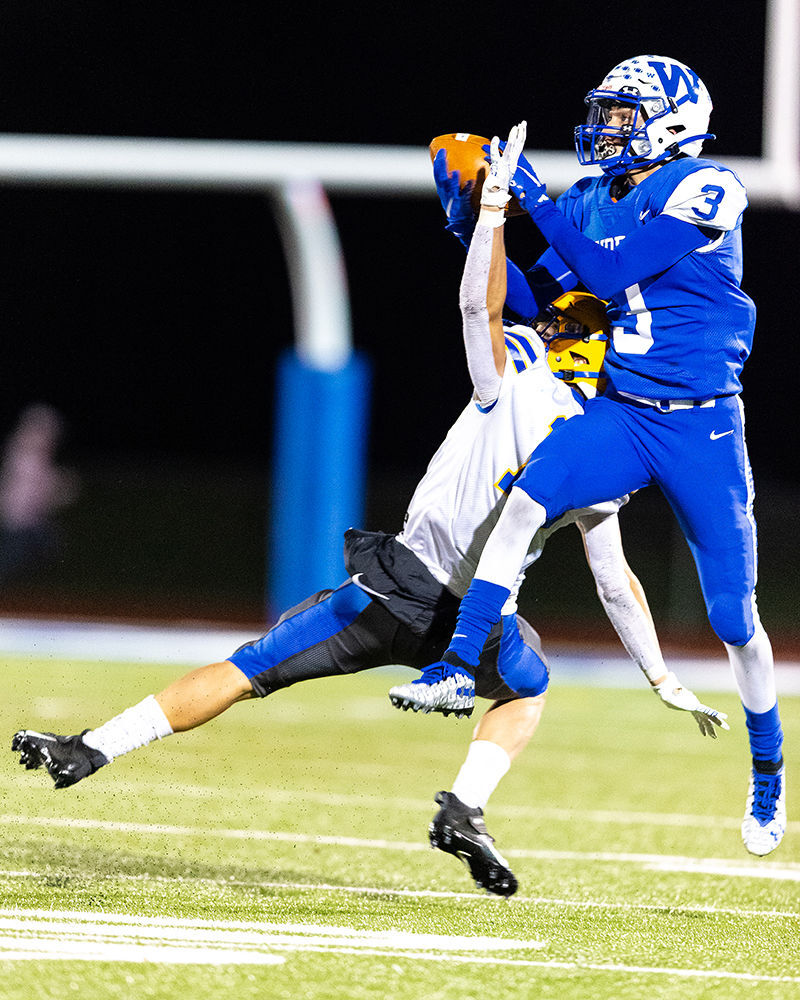 Matty Whysong, 12, disrupts a pass play against a Windber wide receiver in the second quarter, Friday.

Chestnut Ridge’s Kai Bollman, 61, is congratulated by teammates after a stop on fourth and seven to seal the District 5-AA semifinal victory over Windber, Friday.

Logan Pfister runs on a quarterback keeper for the final touchdown of the game for Chestnut Ridge, Friday.

Matty Whysong, 12, disrupts a pass play against a Windber wide receiver in the second quarter, Friday.

WINDBER — Logan Pfister has been the go-to for Chestnut Ridge all season , and the Lions went to him again on Friday night in a 28-22 win over Windber in the District 5-AA semifinals.

The Lions fell behind early when the Ramblers took a 7-0 lead two minutes into the game, and for a majority the first quarter they never found their stride. Pfister, who finished with 175 yards on the ground, eventually led Ridge on a 17-play, 93-yard drive to tie things up, and the senior quarterback led the charge from there.

He scored all four Ridge touchdowns, including a 81-yard keeper that put them up 21-14. That score came two plays after his 85-yard kick return was called back.

“Logan is a special athlete,” Chestnut Ridge coach Max Shoemaker said. “He rose to the occasion and made some big plays tonight, and that’s what he’s done all year. He loves this (Windber) field and has had some big nights up here. We just try to get him the ball and let him do his thing. Tonight, that was on the ground.

“We didn’t throw the ball as much as we typically do, but tonight we felt the ground game was working well and we stayed in that segment of our offense.”

“Pfister is the best player we’ve ever played against,” Grohal said. “He showed it tonight.”

Coming into the game, it seemed set to be a matchup of Windber’s single wing and the read-option, balanced Lions’ offense. The Ramblers came in averaging 308 rushing yards per game, and they went right into it after taking the opening kickoff. Sophomore John Shuster, who came into the night with 1,118 yards and 17 touchdowns, started the game with a 6-yard carry. Five plays later Dylan Tomlinson scored from four yards out to give Windber the lead.

Shuster, who the Lions held to 38 yards in the first half, left with a shoulder injury.

“It’s hard to get a true look against that type of an offense,” Shoemaker said. “Your scout team can’t run it to the degree that you’re going to see. We attribute that some to the first drive they had. We made adjustments and got the kinks out

Following that first Windber drive, the Lions went three-and-out on their first possession then ran just two plays before a fumble ended their next drive.

Windber tried to grab momentum by driving deep into Chestnut Ridge territory before penalties hit hard. On second-and-goal a touchdown by Aaron Willis was negated due to a personal foul, and a failed attempt on fourth down pinned the Lions deep in their own territory.

That’s when Ridge went on its coast-to-coast trip down the field that was capped by Pfister’s first of two 11-yard touchdown runs. Nick Pressnell carried the ball eight times on the drive. The Lions later took the lead with Pfister’s second touchdown.

Windber managed to tie the score again at 14-14 on Aiden Gray to Dylan Tomlinson touchdown midway into the third quarter.

Pfister wasn’t quite done following the Rambler score. After his kick return was called back and took a keep around the edge for 81 yards. The score stayed 21-14 until early in the third quarter.

Windber did mount a late drive to close the gap to 28-22 and had a chance late in the game with less than two minutes to play deep in its own zone. That is when the Lions’ defense stepped up with a sack for a loss and stuffed a fourth down run attempt.

“I told the kids they did a good job of staying the course,” Shoemaker added. “I didn’t sense that was panicked at any point. We didn’t always do things right or as well as we could, but we did enough to advance and get the win.”