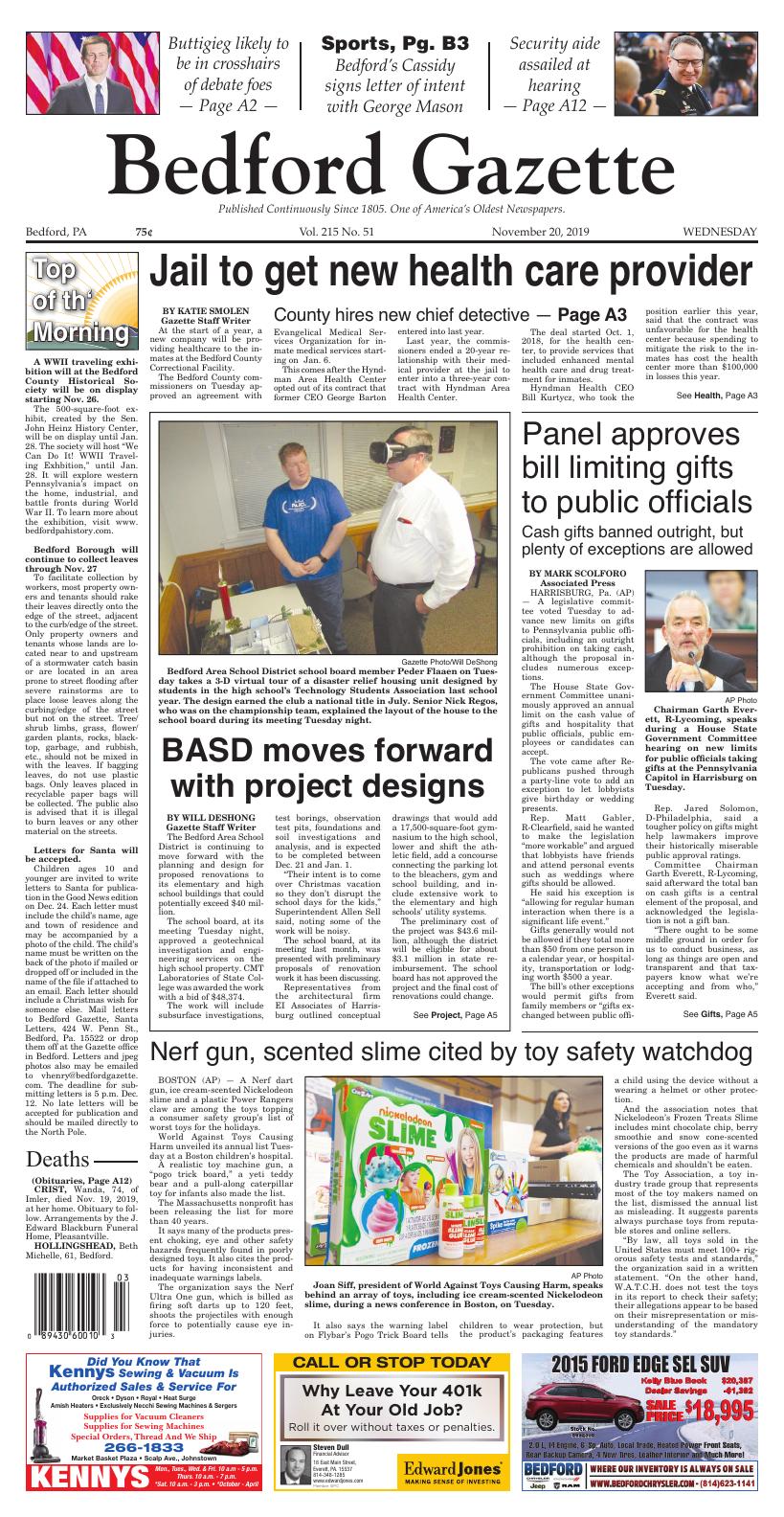 At the start of a year, a new company will be providing healthcare to the inmates at the Bedford County Correctional Facility.

This comes after the Hyndman Area Health Center opted out of its contract that former CEO George Barton entered into last year.

Last year, the commissioners ended a 20-year relationship with their medical provider at the jail to enter into a three-year contract with Hyndman Area Health Center.

The deal started Oct. 1, 2018, for the health center, to provide services that included enhanced mental health care and drug treatment for inmates.

Hyndman Health CEO Bill Kurtycz, who took the position earlier this year, said that the contract was unfavorable for the health center because spending to mitigate the risk to the inmates has cost the health center more than $100,000 in losses this year.

According to Kurtycz, he had been hoping to go back to the negotiating table, but the county was not interested.

“There’s a cost to the quality of care that we provide, and I just don’t think that it was in their budget,” Kurtycz said.

The county had contracted with Harrisburg-based Primecare since 1998, about two years after the jail opened.

The health center started talking with the county around April 2017 about a partnership, the commissioners said at the time of the deal.

The idea that the center could provide services to the jail became more attractive at the time when Harrisburg-based Primecare said it would raise its annual base fee by about $150,000 for 2019. The county’s base contract with Primecare called for $399,000, which didn’t include prescriptions or specialists.

Kurtycz said that as per the current contract, which Nelson said has had some addendums, the health center receives $42,000 a month from the correctional facility.

Commissioner Chairman Josh Lang said the Hyndman health center had opted out of the contract, though he said he couldn’t speak to why.

Lang addressed rumors at the meeting — and Nelson did so later in a phone interview — that Evangelical Medical Services would be providing telemedicine services. Both said that was not the case.

At the time of the deal with Hyndman Health, Lang said ultimately the deal was a benefit for the county.

Nelson said that as far as the dental at the correctional facility is concerned, the county is a member of the Prison Inmate Medical Cost Containment, which is offered through the County Commissioners Association of Pennsylvania, and that the organization works with them to help them find providers.

“So for the dental aspect of the medical services division, right now they are still searching for somebody to provide that service,” Nelson said.

The warden added that they are currently looking into a company called InSight Telepsychiatry for their mental health services but nothing is set in stone.

Nelson said that the county is continuing to work out contracts and expects to have everything in place by Jan.6.

“I want the public to know that the medical care for the inmates will be continued,” he said. “There will be no lapse in that care at any point in time.”

Bedford Area School District school board member Peder Flaaen on Tuesday takes a 3-D virtual tour of a disaster relief housing unit designed by students in the high school’s Technology Students Association last school year. The design earned the club a national title in July. Senior Nick Regos, who was on the championship team, explained the layout of the house to the school board during its meeting Tuesday night.

Bedford Area School District school board member Peder Flaaen on Tuesday takes a 3-D virtual tour of a disaster relief housing unit designed by students in the high school's Technology Students Association last school year. The design earned the club a national title in July. Senior Nick Regos, who was on the championship team, explained the layout of the house to the school board during its meeting Tuesday night.

The Bedford Area School District is continuing to move forward with the planning and design for proposed renovations to its elementary and high school buildings that could potentially exceed $40 million.

The school board, at its meeting Tuesday night, approved a geotechnical investigation and engineering services on the high school property. CMT Laboratories of State College was awarded the work with a bid of $48,374.

The work will include subsurface investigations, test borings, observation test pits, foundations and soil investigations and analysis, and is expected to be completed between Dec. 21 and Jan. 1.

“Their intent is to come over Christmas vacation so they don’t disrupt the school days for the kids,” Superintendent Allen Sell said, noting some of the work will be noisy.

The school board, at its meeting last month, was presented with preliminary proposals of renovation work it has been discussing.

Representatives from the architectural firm EI Associates of Harrisburg outlined conceptual drawings that would add a 17,500-square-foot gymnasium to the high school, lower and shift the athletic field, add a concourse connecting the parking lot to the bleachers, gym and school building, and include extensive work to the elementary and high schools’ utility systems.

The preliminary cost of the project was $43.6 million, although the district will be eligible for about $3.1 million in state reimbursement. The school board has not approved the project and the final cost of renovations could change.

Sell said the district has had some design meetings with the architect and added they will meet with borough officials later this week to talk about permitting.

In separate action, three members of the high school’s Technology Student Association presented their 2019 national championship Architectural Design to the school board.

Six Bedford students were on the winning team in the Architectural Design category, which tasked students with designing a compact house unit that can serve as both a temporary and permanent structure to meet the needs of victims of tornadoes, floods and other natural disasters.

Students Nick Regos, Brandon Fischer and Morgan White told the board about the project, while Regos provided school board members with 3-D virtual reality tours of the structure using virtual reality headsets after the meeting.

Regos, who is also a student board representative, said students will work on similar 3-D tours of different sections of the district’s proposed renovation work.

Whitfield left high school when he became old enough to join the military. He served in World War II at the Battle of Iwo Jima, shipping out on June 6, 1944.

“The gentleman said when he returned (from war) he had to work the farm,” Principal Kyle Kane said. “Some of his friends had the opportunity to get a GED, but he couldn’t make that happen. It was one of his regrets.”

The school board at its meeting also approved:

— District policies setting compulsory school attendance age to be between 6 and 18 years old beginning in the 2020-21 school year. Assistant Superintendent Paul Ruhlman said the new policy reflects a change in state law, which had required children 8 to 17 to attend school.

— Sarah Smith of Woodbury, Kelly Beegle of Bedford, Mark Kirk of Bedford and Alayna Hammond of Bedford as substitute teachers.

— Bedford Elementary to create an Xscape EDU team consisting of four or five students and one volunteer coach. The district costs include providing a room, a $50 registration fee and transportation one time for competition. Sarah Brambley was approved as the coach.

— Shayna Clark as indoor guard coach and Kelly Baker to serve as coach of the high school bocce team.

— Betsy Baronak as a substitute instructional assistant for the After 3 Program at the middle school.

A WWII traveling exhibition will at the Bedford County Historical Society will be on display starting Nov. 26.

The 500-square-foot exhibit, created by the Sen. John Heinz History Center, will be on display until Jan. 28. The society will host “We Can Do It! WWII Traveling Exhbition,” until Jan. 28. It will explore western Pennsylvania’s impact on the home, industrial, and battle fronts during World War II. The exhibit will showcase four lifelike museum figures of local WWII heroes, display several artifacts from its collection. To learn more about the exhibition, visit www.bedfordpahistory.com.

Bedford Borough will continue to collect leaves through Nov. 27

To facilitate collection by workers, most property owners and tenants should rake their leaves directly onto the edge of the street, adjacent to the curb/edge of the street. Only property owners and tenants whose lands are located near to and upstream of a stormwater catch basin or are located in an area prone to street flooding after severe rainstorms are to place loose leaves along the curbing/edge of the street but not on the street. Tree/shrub limbs, grass, flower/garden plants, rocks, blacktop, garbage, and rubbish, etc., should not be mixed in with the leaves. If bagging leaves, do not use plastic bags. Only leaves placed in recyclable paper bags will be collected. The public also is advised that it is illegal to burn leaves or any other material on the streets.

Letters for Santa will be accepted.

Children ages 10 and younger are invited to write letters to Santa for publication in the Good News edition on Dec. 24. Each letter must include the child’s name, age and town of residence and may be accompanied by a photo of the child. The child’s name must be written on the back of the photo if mailed or dropped off or included in the name of the file if attached to an email. Each letter should include a Christmas wish for someone else. Mail letters to Bedford Gazette, Santa Letters, 424 W. Penn St., Bedford, Pa. 15522 or drop them off at the Gazette office in Bedford. Letters and jpeg photos also may be emailed to vhenry@bedfordgazette.com. The deadline for submitting letters is 5 p.m. Dec. 12. No late letters will be accepted for publication and should be mailed directly to the North Pole. 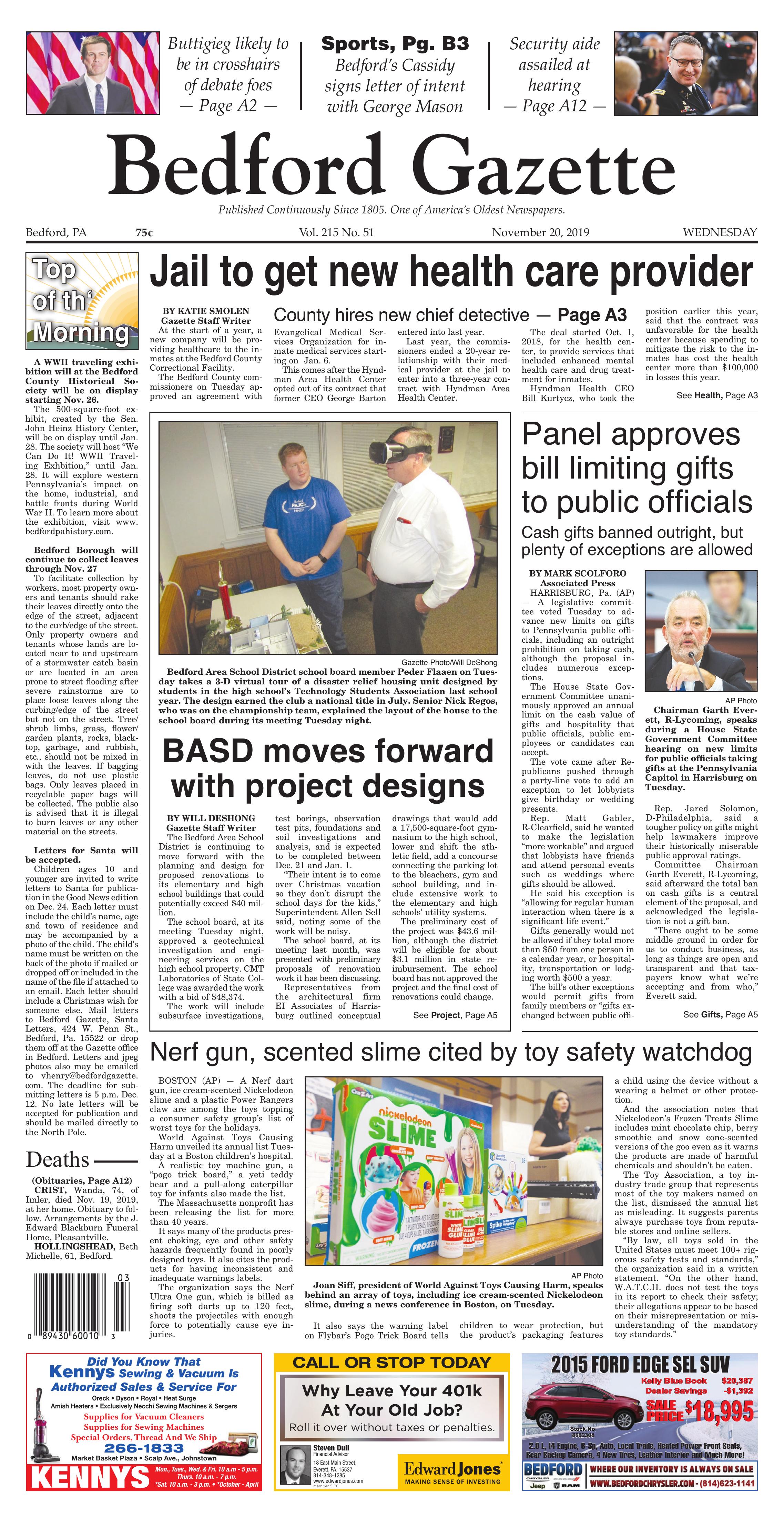